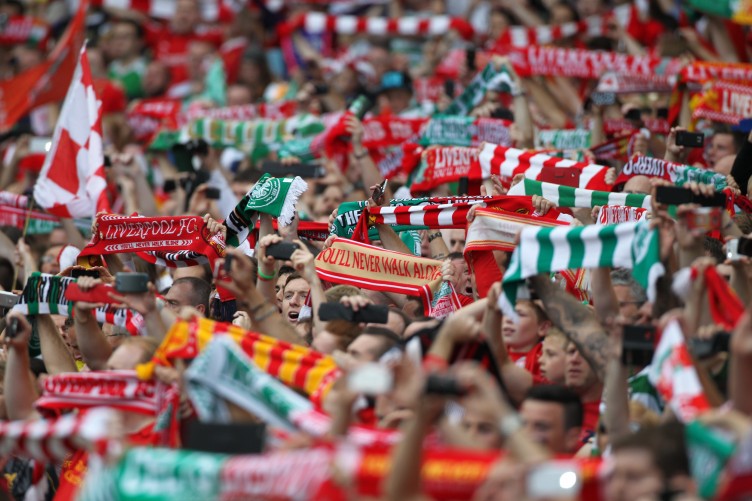 Dilemmas? Awful things aren’t they? Especially for a young Catholic kid growing up in Liverpool in the sixties.

As if life isn’t troublesome enough, without having to make all those earth-shattering decisions that can determine your entire future. Okay, so the Red or Blue thing wasn’t such a hard choice since it was invariably made for you. But the other choices! Jeez!

Rawhide or Wagon Train on the telly? Black Jacks or Penny Arrow Bars in the shops? And what about your favourite saint? Patrick or Francis of Assissi? I mean, it was okay if you were an animal lover. All those little creatures in that lovely painting hovering round St Francis’s halo. Sure-fire vote winner that. Duncan Smith take note. A squirrel clambering up your trouser leg and a couple of dozen budgies on each shoulder and Hey Presto!

Then, of course, we had that perennial quandary. Celtic or Rangers? Mind you, not such a quandary if your parish priest was the intimidating Father Timoney. He of the blotched ruddy visage, the Ozzie White breath and immense cassock, ingrained of wax, tobacco and holy incense and quite eminently capable of twice enveloping Parkhead. Quite simply the ‘Gers were not on the agenda.

No such thing as freedom of choice for we altar boys as far as Father T was concerned. Liverpool may have been close to his heart but not so close as Celtic. So the Bhoys it was for yours truly.

Links as far back as I can remember then. Perhaps mirroring their respective cities. World-renowned west coast seaports. Gritty dockers and resolute men of the shipyards. The intrinsic humour and toughness of the natives. That shared vitality. Those uniquely distinctive accents. Two bastions of sheer working classness. No religious links in the Reds case but as far removed from the establishment as it was possible to get. Just like the Celts. Leave that sort of stuff for yer Man U’s and yer Rangers. The aristocracy. Our loyalties lay with the proletariat. We know our place in the class structure. Down here mate! I say down here!

Not when it comes to football, I hasten to add.

The ‘immortal’ Jock Stein. Our own Bill Shankly’s term for his great friend.
The great protestant Celt – a contradiction in terms? [nah Kenny was too] – and his team arrived at Anfield in 1966. Before he had become immortal, of course. The second leg of the European Cup Winner’s Cup semi-final. Accompanied by hordes of green and white enhooped Caledonian revellers bowing and prostrating themselves all across our fair city. To our matching colour Corpy buses as they swished past on their way down Sheil Road, would you believe? Collaring one such denizen, I asked him why all the genuflections to a mere bus. He put it to me that the Pontiff himself was driving the blessed thing. It took me a good five minutes to convince the poor soul that the Pope hadn’t driven the 26 since they’d got rid of conductors. Still, that’s blind faith, I guess!

Generous to a fault as well, these Glaswegians. Like their Scouse cousins. That common thread of human decency. That milk – or should it perhaps be spirit? – of human kindness. Three thousand empty whisky bottles bequeathed to us following the match. And that was just in the Boy’s Pen! Do you know that with the deposits on those bottles we went out and bought Emlyn Hughes?
I’d had my first taste of such bountiful spirit a week or so earlier. It was an away game at Roker Park.

The Red hordes had taken up their usual position behind the goal. Utter disrespect for the rightful Mackem occupants but who gave a damn back then when we were busy spreading the Gospel according to Shanks? Anyway, a bit of scuffling to our rear. A guy around five foot nine dressed all in green was challenging all-comers to a fight. Now I have to confess here that there weren’t many takers amongst our lot. But who could blame them? I mean have you ever seen shoulders five foot nine inches wide? This guy made Victor Mature look like Charles Hawtrey for god’s sake.

Fear not, though. My mate Billy to the rescue. ‘Soft Billy’ as we used to term him. With good reason too. There followed some rather dynamic ballroom dancing and a few bloody noses. All of them Billy’s. Having strutted their stuff, the battlers went on to become firm friends. Later following a sex-change, they wed and Billy bore our coat-hangered Celtic warrior three strapping boys. One a Celtic fan, one a Red and the other a hybrid supporter of Tranmere and Queen of the South. It’s a funny old game you know.

Big Ron Yeats’s testimonial was our next communion. Early seventies. I was late home from work. Quickly donning my all Red paraphernalia I legged it up Utting Avenue to the Anfield Road End to pay my respects to the big fella…
Disaster!

How on earth was I meant to know that so many screaming Celts would come all this way for a bloody midweek testimonial for one of our players?!? Don’t these guys have anything better to do? I jest, of course. What on earth could be better than a day out to Anfield? Still it would have been comforting to have been the owner of five foot nine inch wide shoulders as I took a deep breath and attempted to camouflage my Redness amongst ten thousand Highlanders resplendent in their green and white.

Only one dodgy moment.

As the green hordes chanted reverently for Shankly so the Kop responded in kind for big John Stein. Well sort of reverently, anyway. “Jock Strap!” they chanted as only witty Kopites, wanting to put at risk the life of one of their own, can! Fortunately our Celtic cousins never deciphered this light-hearted affront to their messiah. In any case I do them a great disservice. They would probably have merely dismembered me. Seriously folks, they were magnificent to me, our Celtic cousins. And to big Ron, too. It was just that I was more relieved by the end of the proceedings than Big Ron. A limb is a limb when all’s said and done! Even mine.

Back to our links.

Kenny’s from Heaven! Er, no. Glasgee actually. Oh I see. You’re saying it’s the same thing? Sure, pal, but try telling that to this out-of-work claymore sharpener I happen to know from Cumbernauld!

Can any player ever have been more worshipped in the entire history of the game? Why I alone used to pray to him twice every day – once at morning, once at night. Not forgetting Grace three times a day. That’s my sister Grace by the way, another big Kenny devotee as you might gather from the number of times she, too, prayed to him.

We at Anfield shall never forget the magnanimity of Kenny’s former club to invite us up to Parkhead to play our first game following Hillsborough.

John Pearman of Red All Over The Land tells me that the singing that day by both sets of supporters of our mutual hymn You’ll Never Walk Alone was the most emotional he’s ever heard. I don’t doubt him. On that day – not for the first time as you will have gathered from this piece – Red and Green stood as one.

Uniquely in football? More than likely. Brothers and sisters united in emotion. The one entrusting its grief to the other. The other embracing it willingly. Big heartedly. Two of the world’s great clubs shoulder to shoulder at a time of adversity for the one. Football can produce poignant moments. That occasion was undoubtedly one of them.

And since? Well, as with most things that run deep, so the relationship has endured. The kinship has surfaced in several other testimonials down the years and was particularly evident in our stirring EUFA cup clashes of several years ago when that Steve McManaman wonder goal stretched Green magnanimity to its limits. Then, a few years back, to coincide with the return home of the last itinerant Celt from the ’67 European Cup Final in Lisbon, we had the latest of the green and white invasions of our precious Anfield citadel.

The occasion was Ronnie Moran’s farewell game, a glittering spectacle at which it was rumoured that the fallen Red’s hero Titi Camara was so impressed by the glorious din emanating from the Celtic supporters – including no doubt our belated Lisbon straggler – he was considering buying himself a kilt. A red and white one, of course! And the Celts? Well for their part they decided to bust our stand. But hey we won’t carp. After all, what’s a broken stand between long-time friends.

You know, it can often prove fruitless trying to explain certain things. For every shared anthem, shared maestro or experience that shapes a relationship there can be a hidden nuance just as important. Equally as instrumental. Sometimes, then, some things are best just celebrated. That is what I have tried to do here. That underlying kindred spirit binding many Reds and Greens together is simply a bit special. Full stop. Explanations are not required. The fact is, somewhere along the way it happened and it is now there for all to see. And while not everybody approves of it – Liverpudlian Ibrox devotees and their Glasgwegian counterparts especially will rightfully be less than enamoured with it all – I know of one dear departed dog-collared soul who will be delighted how things have panned out. Why it must seem like heaven for Father T. In more ways than one.