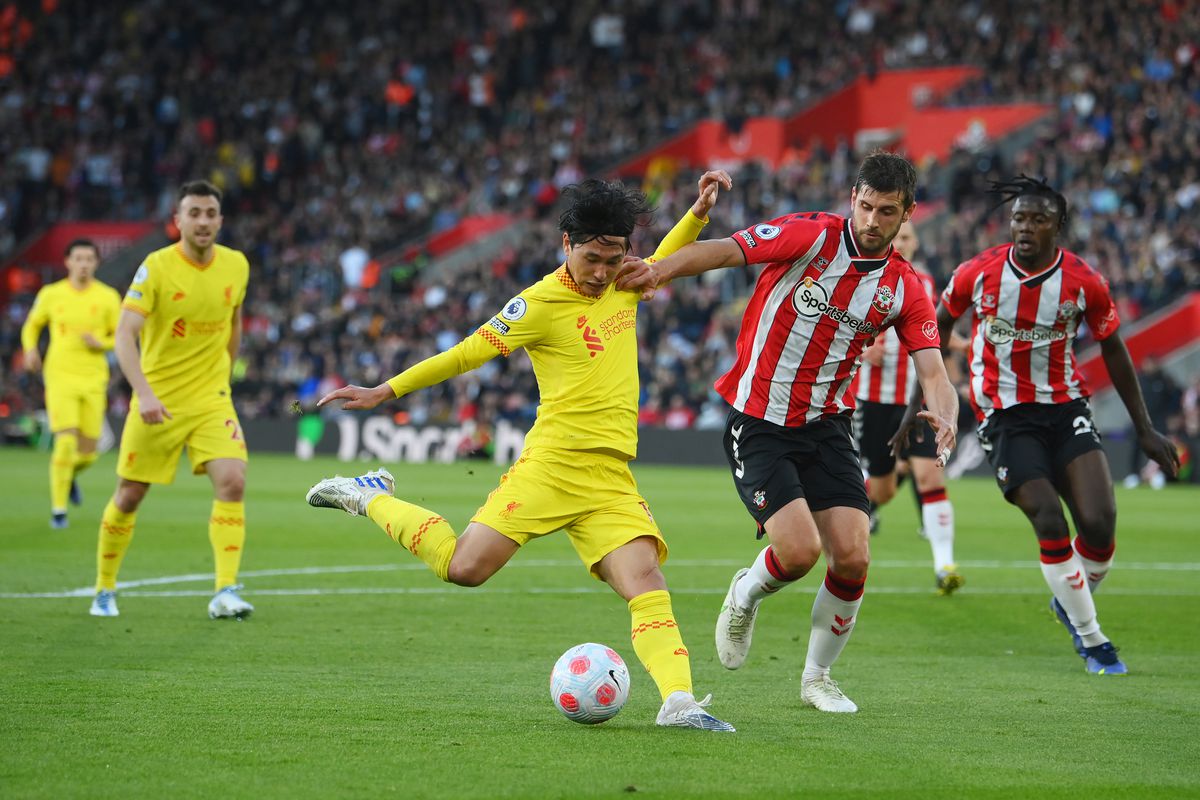 Jurgen Klopp’s mentality monsters showed yet again, just why this group of players is a generational team. In a truly herculean effort, by an unrecognisable Liverpool team, a 2-1 victory over Southampton, has ensured the race for the Premier League crown, will not be decided until the final game of the season.

Showing multiple changes from the gripping FA Cup victory over Chelsea, which included resting the entire first-choice midfield, Liverpool started brightly. However, given that the front three of Firminho, Jota and former Southampton loanee Minamino, had never started together before, it was perhaps no surprise that the odd pass went astray, and a clear cut opportunity couldn’t quite be created. Then came the intervention of Martin Atkinson, or more accurately, the lack of intervention who is thankfully retiring at the end of the season.

A clear foul on Diogo Jota was missed by the hapless Atkinson, and though Joe Gomez, deputising from Trent at right-back, should have prevented Redmond from cutting inside, the ball found its way into the top corner in the 13th minute, courtesy of a deflection of off James Milner. Those in charge of VAR might want to explain just what exactly a ‘clear and obvious’ mistake is if they really believe a foul wasn’t committed on the Portuguese striker in the build-up. However, Liverpool complaints and a quite clearly raging Klopp wasn’t going to change the scoreline and, instead, Liverpool just had to continue to play their football.

Joe Gomez was seeing plenty of the ball down Southampton’s left and it was in that channel that Liverpool were eventually able to create enough space for the tireless Taki Minamino to hammer home an equaliser. It was a truly thunderous shot that went in off the underside of the bar and was no more than a largely dominant Liverpool deserved.

Just as half-time approached, a knee injury to Gomez, which Klopp later thankfully confirmed was not as bad as first feared, meant Henderson resumed his position in midfield, whilst the ever willing Milner slotted in at right-back. The enforced change actually enabled Liverpool to take a tighter grip on the game, and with even the St Mary’s stadium announcer, appearing to bestow upon the visitors a level of support, by playing the still quite fabulous God Save The Queen by the Sex Pistols at half-time, perhaps in a rebuke to a small section of the home crowd singing the national anthem, Liverpool got their noses in front twenty minutes into the second half.

Saturday’s penalty hero, Kostas Tsimikas swung over a corner that was only glanced away by Southampton, and Joel Matip, superb once again at centre-half, somehow got what appeared to be the softest of headers goal bound. It looked for all the world that Saints keeper McCarthy would simply pluck it from what pre-kick-off was a rain-sodden sky, but somehow the ball looped into the corner of the net.

Liverpool, under immense pressure going into this game, had deservedly taken the lead, and continued to dominate the game. Southampton made sporadic attempts to get forward, but it wasn’t until the final five minutes that they put a clearly tiring Liverpool defence under sustained pressure. Divock Origi and Naby Keita had by this time been brought on, presumably to help the team retain possession. It was a tactic that didn’t quite work, but given that goal difference had been taken out of the equation in deciding the destiny of the league title, due to City’s surprise draw with West Ham, Klopp’s men had no need to seek a third goal.

The final minutes were played out without any real threat from Southampton, though there was palpable nervousness amongst the travelling support. Joy, with no little relief, greeted the final whistle.

This truly remarkable squad of players have taken a state-funded City to the wire. It all comes down to the final game of the season. We effectively have two more cup finals to play. One at Anfield, and another in Paris, and having won the first two legs of what is still an unlikely quadruple, who could ask for more? Who could ask for more of these players; this team and manager, and of this club? Though I do have just one request of the person I believe to be Liverpool’s greatest ever player.

Steven Gerrard, you’ve been given one more chance to help Liverpool win the league.

He couldn’t, could he?