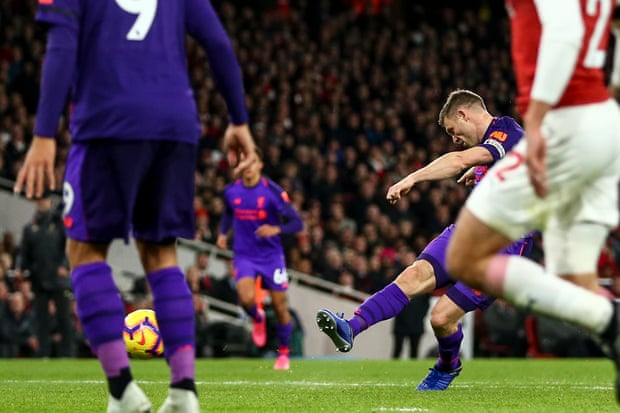 Liverpool travelled down to the capital, to face the Gunners of Arsenal. Reds fans would have preferred more, than the full time 1-1 draw. ‘Keeper Alisson let one in, but boy can the lad sing. Another week reviewed at the world’s favourite football club, Liverpool FC.

Not losing against Arsenal. I know Liverpool we’re leading yesterday and perhaps could have taken all three points. However, I think it’s fair to say the goal was against the run of play (to coin a phrase). Overall it was a really good game. End-to-end stuff for the most part.

Liverpool’s record away to Arsenal isn’t the best so I’m happy with the point and the ‘L’ for the Lost column in the league table remaining at zero. Don’t get me wrong, I’d have loved to have seen the Reds take the spoils but in all honesty, I don’t believe they deserved it. On the other side of the coin, they didn’t deserve to lose either.

Credit has to go to Unai Emery for the way he’s got Arsenal looking like a useful team again. Since struggling against Manchester City and Chelsea early on in the season, they’ve gone on an impressive run and their form has arguably been better than Liverpool’s. If someone told me this game would have ended 1-1, I think most fans would have taken that albeit reluctantly.

Jürgen Klopp described the outcome as “…a good result…”, and I wouldn’t blame him for that. Let’s not forget, Arsenal are in a very rich vein of form right now so this was no mean result as the manager rightly pointed out.

Special mention this week goes to Virgil van Dijk for a really strong display. On another day, he could have scored a hat-trick. Lady Luckjust gave him the cold shoulder yesterday.

This is a fixture I never look forward to so I’m more than happy with the point. What I’m even more pleased about is that Liverpool are currently top as Manchester City play Southampton this afternoon.

Fabinho’s performance yesterday. At one point, Klopp berated his £43m signing for kicking the ball out of play on the edge of the Arsenal box. The Liverpool manager was caught on camera in a furious outburstin response to the Brazilian’s “effort”

Usually, I’d be having doubts about a signing of Fabinho’s profile playing so badly. However, there’s a similarity between him and his compatriot, Lucas Leica who in his first season or two (or three coming to think about it) at Liverpool was pretty below expectations. In defence of Lucas, he was very young when he came to the Reds. What’s the new boy’s excuse?

It’s clear Fabinho hasn’t reached the level that Klopp expects. Should Jordan Henderson – himself no immediate hit when he joined – and Naby Keïta return from injury soon, then I’d expect to see Fabinho cast back into learning mode. I do hope the club hasn’t bought a dud. He clearly has ability and we’ve seen glimpses of it recently but for me, he seems to be lacking confidence.

I saw speculation linking him with a January move to Paris Saint-Germain this morning, and I hope this is simply press talk. It’d be a shame to see him go so soon. Especially as he hasn’t really reached the heights expected of him. I’m not even sure he speaks English properly yet, and this may well be one of the reasons for his bumpy start to life at Liverpool.

Fabinho could be set to leave Liverpool for PSG after just six months at the club because he is "bored. #LFC

Purely from an artistic perspective. Despite struggling on the pitch, it seems as if Fabinho is a very popular character off it, particularly with his teammates.

Last week after the Cardiff game, the Brazilian contingent came together to celebrate the midfielder’s 25th birthday. Alisson, Roberto Firmino and Alberto Moreno were present, with Goalkeeper Alisson showing he’s quite nifty with a mic in his hand as well as a football.

Alisson: "There was a band there and I really like singing and I play the guitar; all the lads like to have a laugh as well." 🎤https://t.co/5QxEzrBvA1

The funny fact of the evening seemed to be that Fabinho chose a song to sing… that he didn’t know the words to! Or shall we be polite and simply say he’d “forgotten them”. A small moment of artistic tragedy.

Next up, no concerts have been announced but we do have a full program of football ahead of us this week. On Tuesday the team travels to Serbia for the return leg their Champions League group C game against Red Star Belgrade.

Following that it’s back to Anfield for the visit of strugglers Fulham, before another two weeks of our lives lost to international football. Hopefully, we can go into the break on a positive note.

Finally a word of support for Leicester City fans following the horrific accident last week that claimed the life of the club’s owner Vichai Srivaddhanaprabha.

An emotional minute’s silence has been beautifully observed by Leicester City and @CardiffCityFC fans in south Wales for our late Chairman, Vichai Srivaddhanaprabha, and those who sadly lost their lives last weekend.

A very sad incident that has deprived the game of someone who achieved what many would have considered impossible. RIP Vichai #YNWA