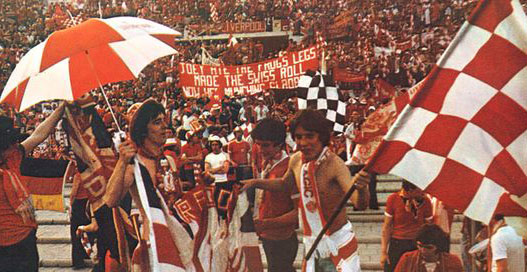 David Bowie, Alice Cooper, Gary Glitter, Wizzard, Sweet, Slade, T-Rex, Mud etc were doing more for make-up sales than even the gorgeous blonde on the cosmetics counter at TJ Hughes in Bootle Strand. Football fans, being the dedicated followers of fashion they were, soon followed their idols. Fans of LFC were no exception. The phenomenon, strangely enough, was mostly confined to away games. Maybe the Alice Cooper lookalikes didn’t fancy a right hook from the docker standing next to them in the Kop! Maybe it was for a similar reason that the “make-up boys” were more in evidence at “safer” away games such as Stoke, Burnley, Derby, West Brom etc rather than the “shit-yer-kecks” venues of Old Trafford, White Hart Lane, Stamford Bridge, St. James’ Park etc. I mean, it wouldn’t really have been a pretty sight to see a David Bowie lookalike with his mascara spoiled by a load of blood running into it! I remember one particular game at Stoke on Easter Monday 1973: Christ, it was like a bloody Glam Rock convention!

It was funny on the way home on the coach or special trying to wash the make-up off. The more clued-up lads though had not only robbed their bird’s (or their Ma’s depending on whether you had a bird or not: believe it or not I did, and a kid) make-up but also their make-up remover.

Matching the garishness of face decoration were the truly most awful clothes in the memory of fashion. Okay, we didn’t think they were terrible then, but believe me, when I look back at photos of that era, they were. Yeah, we must have looked daft, but I tell you what – we had fun, and isn’t that what life’s all about?

This poem is dedicated to the memory of those days:

Early to mid-seventies: Glam Rock was cool
So was supporting Liverpool.
Goin’ away games, yer face caked with glitter.
If yer did that now yer’d get one up the shitter!

Robbin’ yer bird’s make-up to blacken yer eyes.
If she ever found out – what a surprise!
Thick red lippy and rouge for yer cheeks.
We must ‘ave looked right bloody geeks!

Feather cuts and penny round collars were all the rage.
We would have looked daft in any other age.
Forty-inch Lionel’s: T-shirt – “Fruit of the Loom”
I think of it now enshrouded in gloom.

Falmer’s jeans with a tartan trim.
‘Earin’ the owld ones,”Just look at ‘im!”
Sprayin’ yer Air-Wair silver or gold
Wearin’ yer tank top even when it was cold.

Washin’ away the make-up on the way back.
If yer tart found out she’d give yer a crack!
Who were these loonies, these right nutcases?
I’ll tell yer two of them: Evo and Braces!