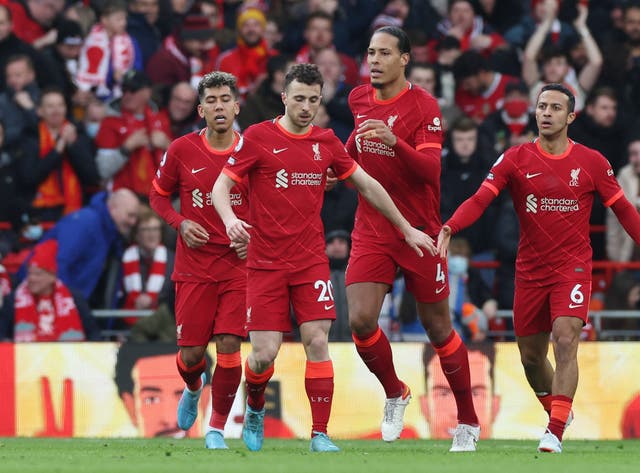 Liverpool started with Trent, Mane, Diaz and Fabinho on the bench, with Curtis Jones starting alongside Henderson and Thiago in midfield. However, it was another irregular starter, Joe Gomez, who got the assist for the opening goal. Just 34 seconds after Alisson brilliant smothered a golden opportunity for Watford to take the lead, a Trent-like cross from Gomez superbly glanced past 39yr old Ben Foster. It was the Portuguese striker’s 20th goal of the season, and on a day when Liverpool looked a little disjointed and struggled to create clear cut chances, it was an opening goal greeted by relief as much as jubilation by the home crowd.

With no changes made to either side at half-time Jones, who struggled to retain possession and whose passing, like many others, was loose, was replaced by Fabinho on the hour. Further changes followed, and the side certainly needed freshening up, as they continued to struggle to put Watford under pressure.

Mo Salah, who was perhaps trying a little too hard to get over his obvious disappointment in crashing out of the World Cup in mid-week, was ironically replaced by Mane. However, not much changed; clear cut chances were few and far between, whilst Foster had a relatively easy afternoon in front of the Kop. Even as the game became more stretched in the final 20 mins, and Liverpool had counterattack opportunities as Watford pressed for an equaliser, players made the wrong decision, took too many touches, and failed to even look like they would add to the scoreline until the 88th minute.

Roy Hodgson’s claim, that Liverpool’s penalty award was not what VAR was for, was bizarre. If a defender rugby-tackling a forward to the ground from a corner, when yards from the ball, is not what VAR is for, then what exactly VAR is for, is a mystery. It was a clear penalty, and as Fabinho rifled the ball into the net, the three points were secure.

So with Man City away next up in the league, Liverpool go top, even if it is just for a few hours. However the remaining matches pan out, when you consider that Liverpool were 14 points behind in mid-January, it’s a phenomenal achievement that the title run-in has become a race at all. As someone once said, it’s squeaky bum time.