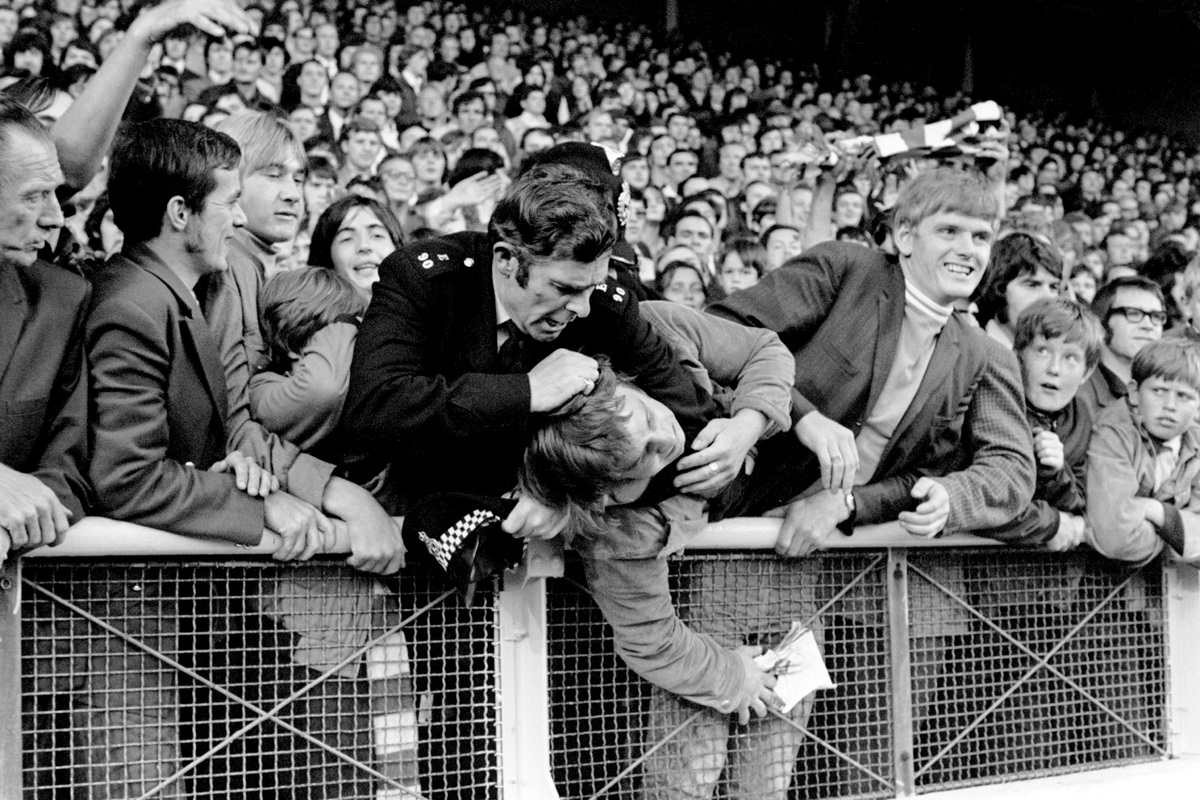 A poem about life in the 70’s for a Liverpool fan, by Peter Etherington…

Late sixties – early seventies you had to be tough.
Give and take a dig and take the smooth with the rough.
You had to have a go when faced with a mob
Or you’d end up with a shiner and a split open gob.

Go to Anfield; hand over your money.
Enter the land of milk and honey.
“Come on you Reds. Tear ’em to pieces!”
After the match, off to Reece’s.

Joe Mageby, Andy Fisher, Peter Kelly too
Taking cockneys and mancs two by two.
“Down the coaches, let’s sort ’em out!”
Kopites ruled; there was no doubt.

No Road End then calling us “gobshites.”
They were still in school trying to get their sums right.
Scary trips to Sunderland, West Ham and Spurs.
Man U, Leicester, Wolves – they were all nightmares.

“Stay! Don’t run! Stand up and fight!”
All this against the Gelderd End’s might.
But did they fight five hundred Scousers just standing there?
No, they turned around and ran like a hare!

“A-G, A-G-R, A-G-R-O AGRO!”
Was the shout against us wherever we’d go.
Arsenal thought they were hard dressed in their white coats
But when we ran at them it was like a rush for the lifeboats!

Getting off the coach, the old flutterbyes
Would be churning in your guts but you had to be wise.
Everybody knew just what it meant
If you got caught at Forest – you got thrown in the Trent!

If it was all so scary why did we go?
It was just such a buzz: you had to be there to know.
We were all dead brave but we were all dead scared.
We’d get trouble everywhere but nobody cared.

Going to Chelsea and taking the Shed.
Dodging the missiles aimed at your head.
Waiting outside would be loads of their loonies.
Safely back on the coach we gave them the moonies!

Burnley, Huddersfield, Derby and Stoke
All thought they were hard: what a fuckin’ joke.
Ten thousand to Burnley every bloody season.
Plates of mashed spuds with loads of mushy peas on.

Newcastle and Man City both had good crews.
“The Liverpool boys are in town”: that was their bad news.
“Fight us if you dare ‘cos we won’t run away
And don’t forget you’ve gotta come to Anfield some other day.”

You had to stand. You just couldn’t run
Although getting a crack wasn’t much fun
If you took to your toes you’d get caught anyway
Unless there was an escort – That’ll be the day!

You didn’t have to be hard; just run witht the pack
But you had to be careful; always watching your back
You never quite knew who was over your shoulder
Or if you’d get hit with a bottle or a boulder.

It’s calmed down a lot now; even Old Trafford’s a doddle
But not in ’69 when I got hit with a bottle
Concussed for three days or so I was told
But I had my revenge – a dish best eaten cold!

It might not have been him who hit me with a chair
But I had to get some manc: I just didn’t care.
But that’s how it was: it was the law of the wild
You very quickly became a man when you’d only just been a child.

The point of all this is not to glorify thugs.
Hooliganism is strictly for mugs.
But it was dog eat dog – you had to be wary
Going away in those days was very bloody scary!

Don’t get me wrong I was never really violent
Just has to be said; no point in being silent
If you weren’t prepared to at least have a go