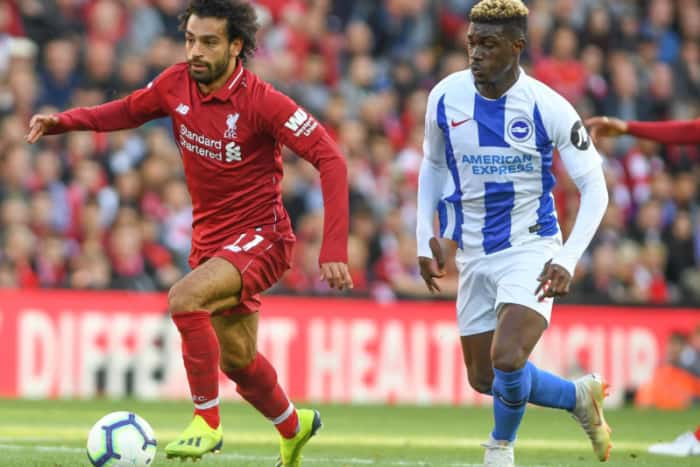 It’s been a consistent refrain throughout the entirety of Liverpool’s so far excellent Premier League campaign – that inevitably a bad spell is just around the corner.

The last league fixture against the current champions Manchester City was undoubtedly one of the most intense, exciting and dramatic Premier League fixtures that has taken place for many years.

Having a bet on Brighton v Liverpool? Check out the latest odds now!

Both teams gave absolutely everything, with skill in abundance and drama aplenty. Indeed, the fine margins of such a clash were clear with Liverpool literally 11mm from taking the lead and maybe an entirely different outcome.

Guardiola had been playing mind-games in much of the pre-match press talk and in a transparent effort to ramp up the pressure had amusingly claimed the title race would be over if City lost.

The fact that Pep Guardiola’s side changed their entire outlook on how to win; defending the last 20 minutes as if their title hopes depended on it, shows the respect they have for Jurgen Klopp’s Reds.

With that said, it was ultimately a defeat, and one that now reduces the gap to four points. Followed up of course by exiting the FA Cup with a tame performance against Wolves, albeit with a radically changed side.

Whilst no one likes to go out of competitions or lose matches, an early exit in the FA Cup may prove to be a blessing in disguise. It’s already evident that a buildup of injuries has the potential to damage the team. Prioritising the league and Champions League is the clear and logical step.

It’s fair to say that after defeat on Monday, for some, this current time now constitutes the potential blip that many feared may happen to Liverpool. Therefore, Saturday’s trip to the south coast in Brighton takes on a much greater significance.

Not even so much amongst the team itself – the current side have proven on numerous occasions that they are capable of striking back from bad moments. Rather, the match at the Amex is one to lay a marker down to fans and the media.

Brighton have been inconsistent generally this season, but always quite strong at home. Let’s be clear though, dropped points of any kind on Saturday will be greeted by frenzy in the back pages and fan phone ins. The narrative is clear already, that Liverpool are going to fall away, that they don’t have the squad depth or title experience to last when the pressure is on.

Don’t be fooled however. The pressure is still on the Blues from Manchester. Their own match this coming Monday against Liverpool’s FA Cup opponents Wolves, is far from a foregone conclusion. Equally, they have trips away to Newcastle and home ties against Arsenal and Chelsea within the next month. It is more than realistic to hope they will drop some points along the way.

If Liverpool beat Brighton at the weekend, they suddenly go back to 7 points ahead, with City to play on Monday and the pressure back on them. Equally, it will shut down any early talk of January blues and signal to the football world that Liverpool are back on the march for this title.