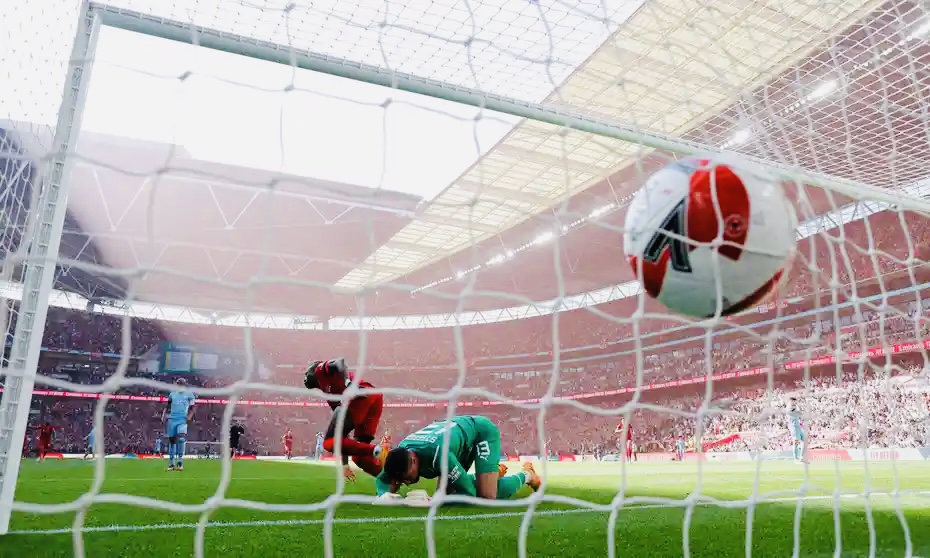 Silencing some recent detractors, a first half brace from Sadio Mane, ultimately settled this FA Cup Semi-Final, but this match may well be remembered as a tale of two goal-keepers. Alisson, who made crucial saves to take his side to an eighth cup final under Jurgen Klopp, and Zack Steffen, the hapless City stand in, who doomed his team to a third consecutive FA Cup Semi-Final defeat.

Making three changes from mid-week, with Keita, Konate and the superb Diaz, all making the starting eleven, Liverpool’s high press had already re-gained possession several times, before going ahead from a corner as early as the ninth minute. Once again, it was Konate, showing far greater desire and aggression than the City defence, who he towered above, to send a bullet header into the net from an Andy Robertson corner, just as he’d done against Benfica. Liverpool deserved their lead, looking sharper and hungrier than a strangely subdued City team, who soon found themselves two behind, following a calamitous error from Steffen, and phenomenal tenacity from Mane.

Receiving a back pass, with plenty of time to determine his next move, Steffen took too many touches, dallied with the ball at his feet, and Sadio Mane pounced. Closing down the goal keeper almost on the goal line, the Senegalese blocked the clearance, and the ball ricocheted into the net. Liverpool were two up inside half an hour, and with City having barely created a chance, whilst Liverpool’s high energy pressing was putting City under continual pressure, a thorough drubbing for the Premier League Champions was looking a distinct possibility.

Diaz, who terrorised Cancelo down the left flank, whilst the technical brilliance and sheer imagination of Thiago, led the orchestra in the middle of the pitch, was enabling Liverpool to put in a near faultless first half play. Klopp later claiming it was ‘one of the best we ever played’, and it was difficult to argue with that statement, as Mane put his team three up on the stroke of half-time. Intricate one touch passing on the edge of the City penalty box, eventually falling to Thiago, who found Mane with a cute chipped pass, who hammered home a right-footed volley, as Steffen once again looked flat footed.

Manchester City came out for the second half a different team, despite the surprising lack of changes to the eleven on the pitch. Guardiola had obviously instructed them to actually play football, rather than continue with the failing tactic, of simply kicking and relentlessly fouling the dominant Liverpool, and within seventy seconds they were back in the game. Grealish, hardly the £100M magician the City fans thought they’d signed, finally delivering, as he stroked the ball home from inside the box.

The City goal changed the atmosphere, if not the momentum, and with Fernandinho eventually yellow carded for his umpteenth foul on Mane, and Alisson making a world class save as Jesus bore down on goal, the last twenty minutes approached. It was a final twenty minutes in which Salah, maybe a little too keen to score, spurned a glorious chance to ease the tension for his side, whilst Sterling, never quite the same player when up against his former side, struck a free-kick well over the bar.

As Liverpool looked to see the game out, Klopp, having already replaced Keita with Henderson, brought on Jota and Firminho for Diaz and Mane, both of whom deservedly received the rapturous applause of the Liverpool fans, who’d not only outnumbered, but also out sung the Cify fans all afternoon. However, if we thought the final moments would be stress free, Bernardo Silva, with an assist from Mahrez put paid to that in the 90th minute.

Just why Guardiola, once again out-foxed by Klopp, chose to make so few changes to his team as the game progressed, with his charges 3-1 down, who knows?, but as ‘our number four’ remarked post-match, Liverpool ‘made it difficult for themselves’ in the final moments. With four minutes of added time still to see out following Silva’s strike, Salah had chosen to shoot following a counter-attack in which he may have been better served taking the ball to the corner, and possession could perhaps of been better retained, but as the 95th minute came to an end, referee Michael Oliver blew his whistle, and Liverpool had reached their 15th FA Cup Final, all be it, their first in a decade.

Make no mistake, this result, which continues to keep the near impossible quadruple alive, was richly deserved. What is more, given the shameless disrespect shown by a minority of Cify supporters to the minute silence for the victims of the Hillsborough disaster before the game, it was surely just that Liverpool put City in their place in a quite magnificent first half display. It was that first half, that ultimately saw them over the line, and having silenced one half of Manchester at Wembley, it’s Manchester United next up at Anfield, with the Premier League title at stake.