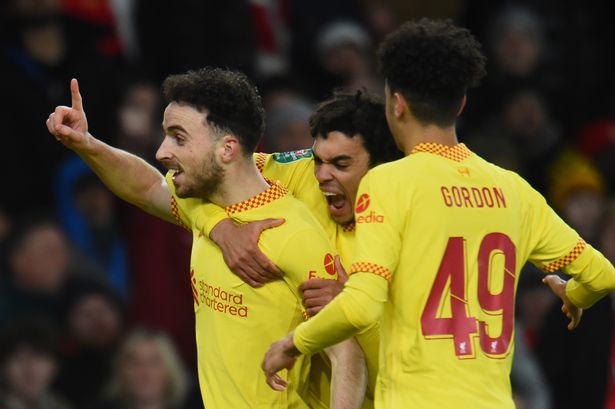 This was a comfortable, highly professional, if largely uninspiring performance, that provides the chance to win a record ninth League Cup. Two goals from Portugal’s Diogo Jota, the second, a sublime lobbed finish, being enough for Liverpool to ease past a toothless Arsenal.

It was Arsenal that started the brighter, with Liverpool, once again, without their two African talisman up front. That bright early start from the Gunners soon resulting in a free-kick, that Kelleher did well to tip onto the bar, from the later substituted Lacazette. In truth, that was as close as Arsenal came to scoring, and as Liverpool settled into the game, Jota put Klopp’s men in front on twenty minutes.

It was a mazy run from Jota, who kept on his feet after being fouled, and finding himself on the edge of the penalty box, who then scuffed a shot, that wrong footed the off balance Arsenal goalkeeper. The lead was just about deserved, and they took that lead into the interval, with few further chances created by either team.

The expected thrust for the Gunners as the second half began, never really materialised, and Liverpool continued to dominate the ball. Though that dominance, with Fabinho, Henderson and Curtis Jones in midfield, lacked some pace and guile, Arsenal were easily kept at bay, and just when a second goal was required to settle the tie, Jota delivered again.

He delivered however, from yet another wonderful pass from the mercurial Trent Alexander Arnold. Taking the ball on his chest from an inch perfect pass, he lobbed the oncoming Ramsdale with the deftest of touches. The finish was special, and it prompted some Gooners to vacate their seats early.

As the clock wound down, Minamino, Milner and Nico Williams were introduced. Arsenal where though by this time well beaten, with Kelleher barely forced into making a save throughout the second half, with only the lively Martinelli providing any spark up front for Arteta’s young charges.

So, we’re on our way to Wembley at the end of February. Those currently on AFCON duty have a cup final to look forward to. It might only be the League Cup, but it’s a trophy not yet won by Klopp. With Chelsea waiting in the showpiece final, these players, this team, the travelling Kop, will be confident of adding to the Champions wall at Anfield.