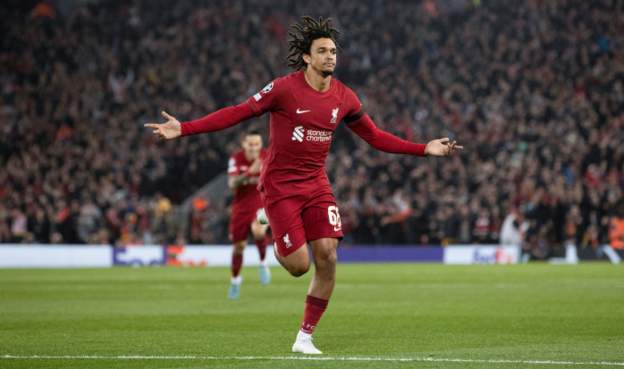 A Champions League home debut for Darwin Nunez was one of three changes from Saturdays line up and, in defeating Rangers 2-0, Liverpool certainly looked more like their true selves. They were aggressive with and without the ball, played forward with purpose and intensity, and a 4-2-3-1 formation, gave them more solidity through the middle of the pitch. It was a thoroughly deserved victory.

Nunez was sharp from kick-off, with Rangers man of the match, 40yr old goalkeeper Alan MacGregor, blocking a snap shot in the opening minutes. However, despite his heroics throughout the game, there was nothing he could to stop a wonder it’s top corner free-kick from an under pressure Trent Alexander-Arnold. The free-kick coming courtesy of Ben Davies, finally making his Anfield debut, though in the blue of the Glaswegians.

It could so easily have been worse for Davies, as the first half progressed. He, and his defensive partners were constantly back peddling, and didn’t know who to pick up, as Mo Salah, Diogo Jota and Luis Diaz constantly changed positions, and attacked from all angles. Somehow though, it was only one nil at half-time, as chance after chance never quite found the back of the net. MacGregor denying Salah with a save low to his right, that looked destined for the bottom corner, which was probably his best of the night, being just one of many opportunities that should have ensured Rangers were comfortably beaten in the opening 45 minutes.

Thankfully, early in the second half, Salah converted a penalty won by Diaz. Jinking into the penalty box, he was sighed down by defenders who probably had twisted blood before the Colombian hit the ground. Liverpool continued to create opportunities, with Nunez, who at times looked a little to desperate to score, was denied yet again, and Jota saw a left foot strike brilliantly tipped over by MacGregor.

With twenty minutes remaining, Fabinho and Roberto Firmino replaced Jota and the impressive Jordan Henderson, who looked more comfortable anchoring the midfield than when playing further up field. Harvey Elliot and James Milner also made late appearances, whilst Kostas Tsimikas made an astonishing goal line clearance in the final minutes, from Rangers only clear cut chance of this first competitive game between these two sides.

As injury time ticked by Jurgen Klopp took the opportunity to ensure Trent got the ovation he deserved from the Anfield crowd, when replacing him with Joe Gomez in the 92nd minute. A beaming smile from the German accompanied the final whistle, and sitting on six points after two games, another victory at Ibrox next week will surely see Liverpool progress in Europe’s elite competition.