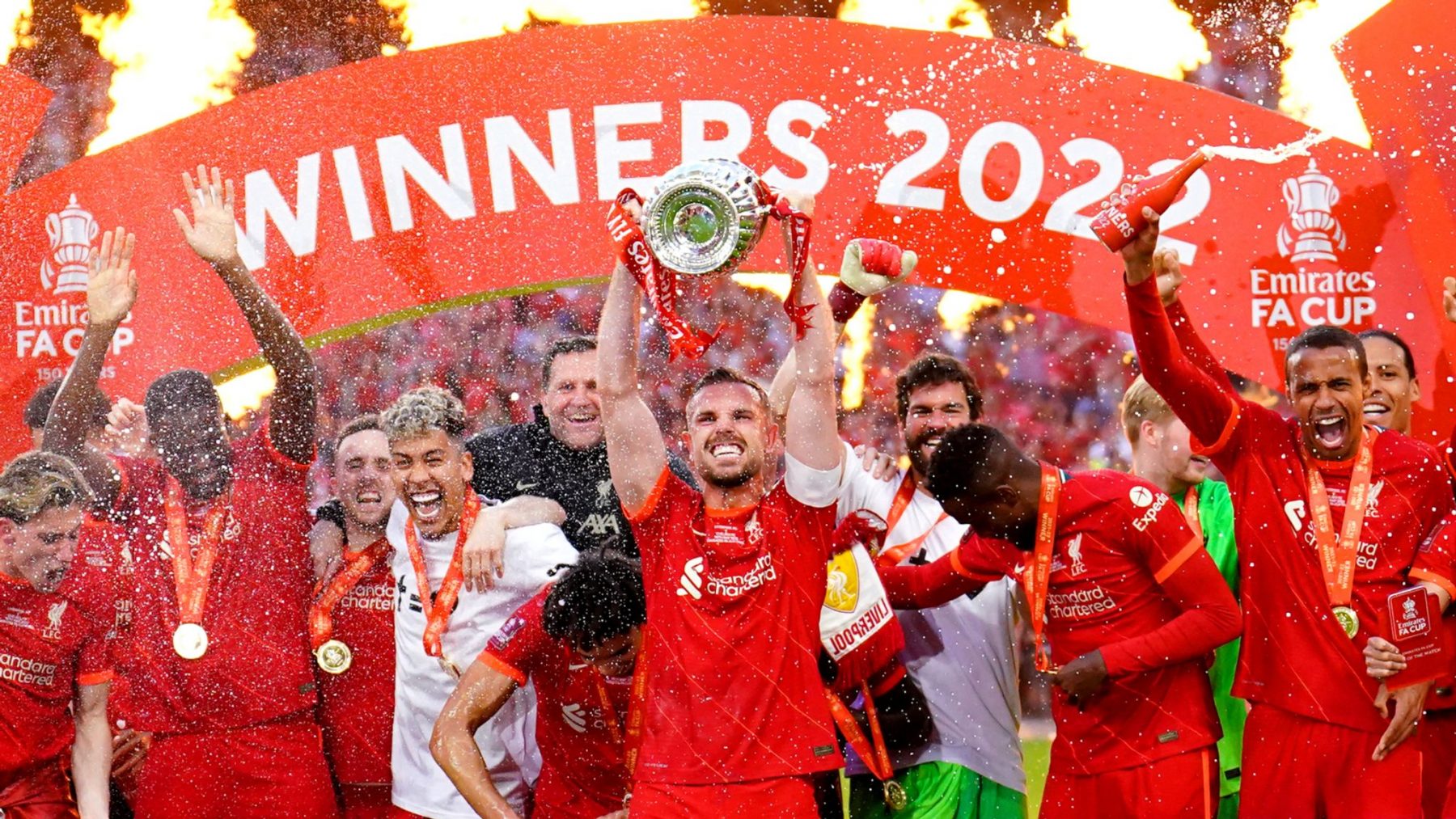 To live a full life is to live one in the moment as often as possible. It’s a foregone conclusion that everything changes on a daily basis and frankly, placing undue expectations on any one thing can be just as much a gut punch as a triumph. Finding that balance, that even keel approach for every challenge and obstacle is ultimately the best way forward, by dedicated preparation and with one eye perhaps on what is to come but never letting it drift too far ahead. Perhaps a bit too zen of an outlook when jubilation and relief are ringing through Merseyside but what sports echo most accurately in life is that things do not go as scripted and it’s only when you are prepared for anything, even suffering, that it all becomes possible.

Winning the domestic double with still more trophies to play for this season is beyond remarkable. It’s madness, in all honesty. An embarrassment of riches any team would crow about for the next decade. Such is the rarified air that Jurgen Klopp has taken Liverpool. Once and for all, the idea of being a manager who perhaps had holes in his resume can be put to bed. He’s now won every trophy available to him for the club. It was all mostly salty and jealous other fanbases whose own teams have imploded or don’t have what seems the unique team synergy that has become the Klopp speciality. Yet, all of it can be thrown out for good now. The simple fact that HIS contract extension was met with cheers and sobs akin to signing the best players in the world is all anyone needs to know about his impact on the team and the league itself.

At his opening press conference all those years ago, which seems more and more like he was some sort of time traveller predicting what was to come, the biggest message he had was he needed to help turn the squad and the fans into believers. That the sense of destiny needed to be restored and instead of approaching big matches or finals with dread of defeat, instead we needed confidence and ambition to perform our way. That mission was almost immediately accomplished and now, over half a decade later, the concept of the Merseyside mentality monsters is clinched.

Looking back at this cup final, it makes no sense that it remained scoreless. Early on Liverpool seemed like they’d found a crucial weakness in Chelsea and the chances were flying in with few results. Luis Diaz and his endless energy and pace were a menace from the opening kick off and yet, they had nothing to show for it. Chelsea re-organized like all good teams do and grew into the match. They ended up having the lion’s share of big chances by the end of the first half and it all looked set for a proper back and forth second half. In some ways, it was, as both sides continued to trade chances but still, no goals to show for it. As extra-time loomed, that sense of deja vu began to creep in. Surely this wouldn’t go to penalties too, right?

In the spirit of living in the moment, a quick aside for three players in this Liverpool squad, two of whom will certainly remain for years to come, one who hopefully will but the rumours about leaving are slowly creeping in. First to Trent Alexander-Arnold. His ball-striking skills are at such a level now that he is only judged when he does NOT play a world-class pass. He makes the utterly unbelievable seem like your standard cross and has answered the bell time after time tracking back. The narrative, which was a weak one to start, about him being a liability in defence can once and for all be put to bed. There’s a sports phrase known as the Table Approach, where you measure all the things a given player brings to the table versus what he or she takes off of it. For Trent, his forward ability and crossing are so absurdly elite that if he was stiff in defence, it wouldn’t matter. However, the truth is, he does have great instincts in the tackle and was there to stop countless plays at the crucial moments, showing he has the grit and guile for both ends of the pitch. His only real drawback might be he doesn’t have truly elite pace but is rarely ever burned completely for it and has the cover behind him to not be scared to take chances. Which brings us to Alisson.

To make that change from doubters to believers, one of the crucial steps was bringing in Alisson. Here now, Liverpool have a keeper who is so calm and cool that his biggest liability is that he might be TOO casual at times. There are moments when he appears ready to make a Cruyff turn on a charging opponent rather than just clear it first time. It definitely makes for some anxious moments but it’s really the only ones he ever gives the team. His composure and shot-stopping is second to none and his distribution and ability to close down one-on-one chances might be the very best in the world at the moment. Going into the penalty shootout, I knew that we had every right to be confident because we had Alisson in the net and he’d always give us a chance.

The person who is probably most thankful for Alisson after today is Sadio Mane, the final person I’d like to speak of. The rumours have begun to swirl that Bayern Munich might be eyeing him as a potential Lewa replacement and while I’ll believe any of that when I see it, there is always the chance that this could be his final season in a Red shirt. With his contract up soon and with so many other players pushing for playing time, could he be one to make way for the next version of this squad? Much can be made about missing his penalty and how all the circumstances around it, most notably taking it against his national team colleague might have really contributed to the outcome. All fair criticism as well, and just as much, credit to Mendy for being an outstanding goalkeeper too. But the work that Mane put in tonight and has the entire season must be celebrated as well. He has always seemed to operate just a bit in the shadows of the rest of the front 3, not nearly as flashy as Firmino or as prolific as Salah and now, the sizzling pace of Luis Diaz is getting the eyes. Yet, Mane is there through it all, adapting to different positions and always, always seeming to put in a full shift. When he needs to, he drops deep and retains the ball or starts quick pass and move situations. Like Mo, he is also extremely durable and strong as he is rarely if ever pushed off the ball, even against bigger opponents. Should Liverpool finish this epic season, a good portion of it will be due to his hard work and graft in the middle of the pitch.

All of this is to be said that right now, all that should be done is to enjoy this victory. When the Greek Scouser Kostas Tsimikas buried his penalty, Man City and Real Madrid were a million miles away. Those are challenges for another day, one that frankly seems harder by the goal difference, the other very much still ready to be taken. Deep down though, as the celebrations kicked off, all I could think of was the gratitude I felt in this moment. To be able to enjoy this team, these players, this manager, this sport in the way I can. For so long, even just being in the mix was a hard enough task. It would take a legendary Stevie G performance or some good luck and fortune mixed with a couple of temperamental but extraordinary talents to get close. Now though? This is a team that is up for anything, come what may. They have proven they can win in any sort of game, are not afraid to suffer, are happy to run, to dazzle, to put in a shift and to give everything they have. These sorts of seasons of good fortune come and go as witnessed as recently as last year. Instead of another season of what could have been, this is one that shall always be remembered. Across the pond, this fan has always been a willing believer, but now especially, he’s just so glad to be a Red.