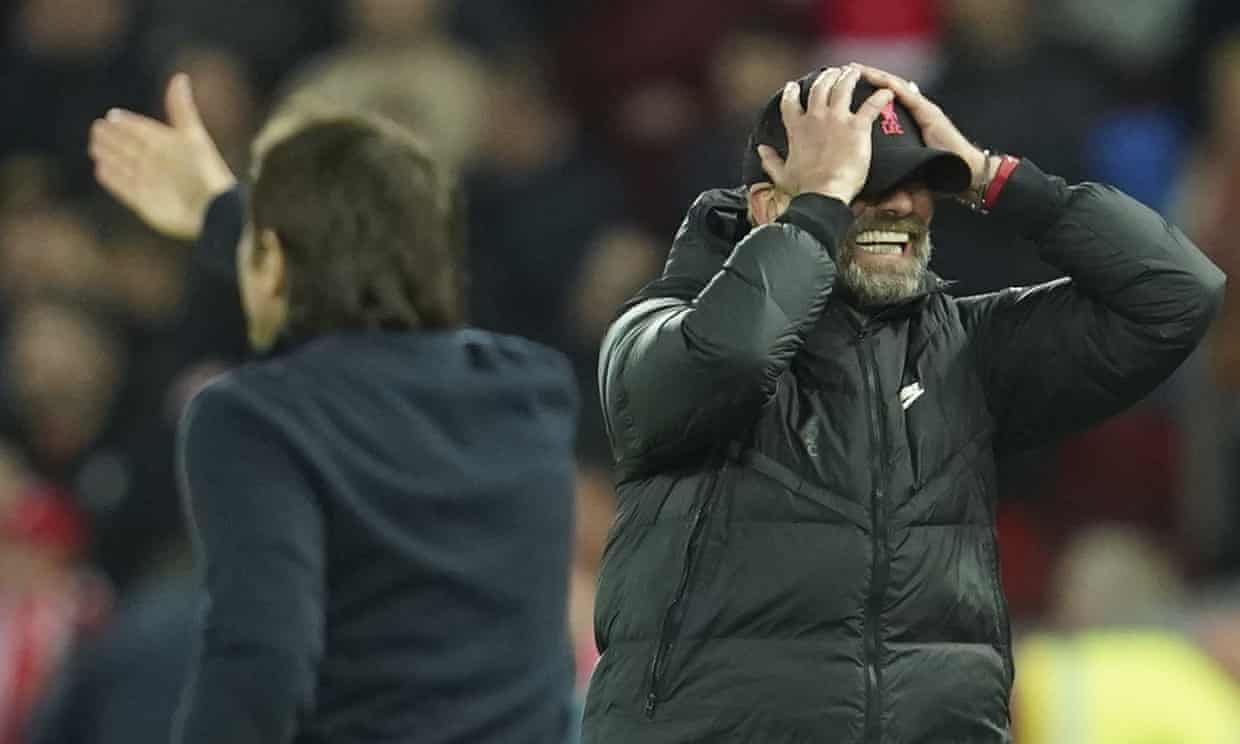 In a game in which Liverpool almost certainly had to win, to keep their title aspirations alive, it was perhaps a defiant Spurs, who created the better chances and looked more likely to take all three points. Instead, second-half goals from Son, and a deflected shot in front of the Kop for Diaz, resulted in a draw that probably suits neither team.

With Klopp starting with what many fans probably believe is Liverpool’s strongest eleven, with Sadio Mane, Mo Salah and Luis Diaz upfront, and Jordan Henderson, Thiago and Fabinho in midfield, it was Virgil van Dijk, accompanying Ibrahima Konate in the middle of defence, who came closest for Liverpool in the first half. Rising highest from a corner, his header glanced the bar, whilst Tottenham, always dangerous on the counter-attack, struck the outside of the post through Hojbjerg.

It was a first half in which Liverpool had the lion’s share of the ball, without ever really creating clear cut opportunities. Mane and Salah looked perhaps half a yard off the pace, whilst Liverpool’s passing, though accurate, was not often enough played for a red shirt, as opposed to a red shirt, and though they continued to push, playing much of the game in the Tottenham half, the teams went in all square at half-time.

The second half began in the same manner, with Liverpool again putting a resilient Spurs side under constant pressure. Again though, clear cut chances never really materialised, whilst the final pass too often went astray. Conte’s team continued to play on the counter-attack, and in the 56th minute, Son put the away side in front. Finding himself largely unmarked in the six-yard box, after a slide-rule pass from Ryan Sessegnon, the impressive Korean stroked the ball into the net.

With a little less than thirty minutes remaining, Jurgen Klopp made changes. Henderson departed for Diogo Jota, whilst Andy Robertson was replaced by Kostas Tsimikas. Those changes ultimately preceded a goal, that came just ten minutes later. Diaz, again Liverpool’s star performer, took a shot from eighteen yards out, that took a deflection that left Lloris helpless in goal, and the ball found its way into the net in front of a baying Kop. Fifteen minutes remained, and with Divock Origi sitting on the bench, surely he’d be introduced in the final minutes. However, Jurgen brought on Naby Keita, and though Spurs once again were harried off the ball, they defended resolutely as the minutes slid by, without ever conceding a clear goal-scoring opportunity. In fact, it was Conte’s men who spurned a golden opportunity to win the game in the dying seconds.

So, with just three league games remaining, if Liverpool are to win the title, they’re now relying on Manchester City, who perhaps carry mental scars from their capitulation to Real Madrid on Wednesday evening, to drop a minimum of three points. Of course, the odds are, that City will now go on to win a third title in four years, but in this most extraordinary of seasons, who’d rule out one more twist in an enthralling race for the Premier League crown.