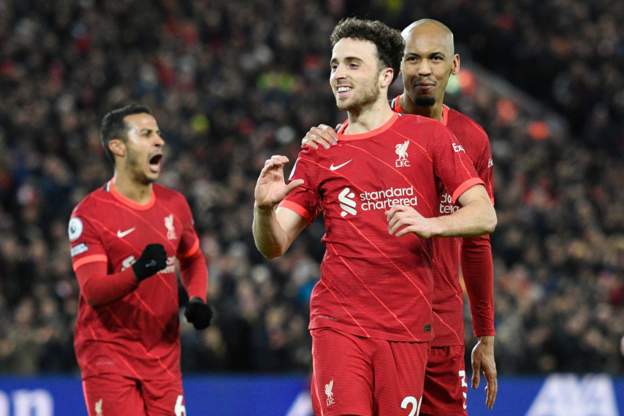 For most of the last few seasons, Liverpool and Man City have been doing a delicate dance about who can play the most positive, attacking football in England. The two squads forever seem to be locked in a race of intricate pass and move plays down the wing mixed with gallops through midfield and sweet finishes in the box. Their constant hunger and desire to never settle is what has separated them from the field. This could perhaps be a turning point in the season again, as with today’s victory against Leicester, there just seemed to maybe be a bit of a gap opening between the top two and everyone else. There certainly is looking like an epic battle for the 4th spot this season as well but City set the pace and increasingly, Liverpool seem the only team with the horses to stay in it.

The game today had many heroes. Diogo Jota continues to be an absolute poacher in the middle of the game, always present and ready to pounce on any opportunity. Despite many valiant saves from Schmeichel, both Liverpool goals came from the real graft and positioning that Jota puts himself into. It has long since passed the time when anyone should be surprised by this and his continued rich vein of form makes the real question of who is going to start in the centre of the front 3 moots when everyone is back and fully healthy. Luis Diaz had a proper full debut as well and right away showed his work rate and skillset to Anfield. As he gets more game time, the one thing he was lacking, spatial awareness with Robbo and his midfield will gel as well. With some rumblings that Sadio Mane might be starting to have his head turned by other clubs, Diaz will give both Mane and Klopp something to think about going forward.

The wonderful reception for Mo Salah must be talked about as well. It is evident that the heartbreak of the AFCON loss is still weighing on him. Instead of his trademark smile, Salah carried a look of pain and anguish at times during training and even as he came on the field. However, pain is temporary, class is permanent. As soon as he joined, the entire team and crowd hit a jolt of energy that at times the game had been missing. His every touch was roared with approval and he came ever so close to a truly world-class goal a la Chelsea from 2019 with the effort just hitting the top of the frame instead. He will know once again that he is beloved not just in Egypt but in Merseyside as well and a determined Salah could be the real X factor in any sort of title charge to come.

Yet, the real man in the middle today and on most days was Fabinho. Acting as the kind of shield that top teams must possess, his ability to intercept, break up play and always be in the exact right place to unleash the counter-press was the foundation Liverpool built on. The role of a defensive midfielder is oftentimes not sexy. Usually there, you are going to come out with all sorts of kicks, bruises, dirt stains and probably fouls, but just as often, Fabinho also comes out with possession. Since so much of what Liverpool does is based on triggering overloads and looking to turn defence into offence, what Fabinho did today proved once again that he remains a must-start in the squad. His interception led directly to the second goal, with a tackle that instantly turned everything around. Likewise, with goals coming from elsewhere, he could now re-commit all his attention to the midfield and not worry about being a goalscorer anymore after a nice run of form.

The introduction as well of Elliot was a wonderful sign and it showed that for the first time in a long while, Liverpool have real depth available to them. With games coming fast and furious, being able to bring in players who can not only maintain levels but elevate them are crucial. It’s exactly the luxury that Man City always seem to possess and one that Liverpool may be ready to match in the weeks ahead.

Though it’s still too early to be looking ahead to that City clash in April, Liverpool increasingly have their destiny laid out for them. With every game, the squad gets stronger, with new and returning faces coming in, ready to grab what they can. The catbird seat is of course where every team wants to be, but to be the one chasing it with increased speed and determination isn’t bad either.