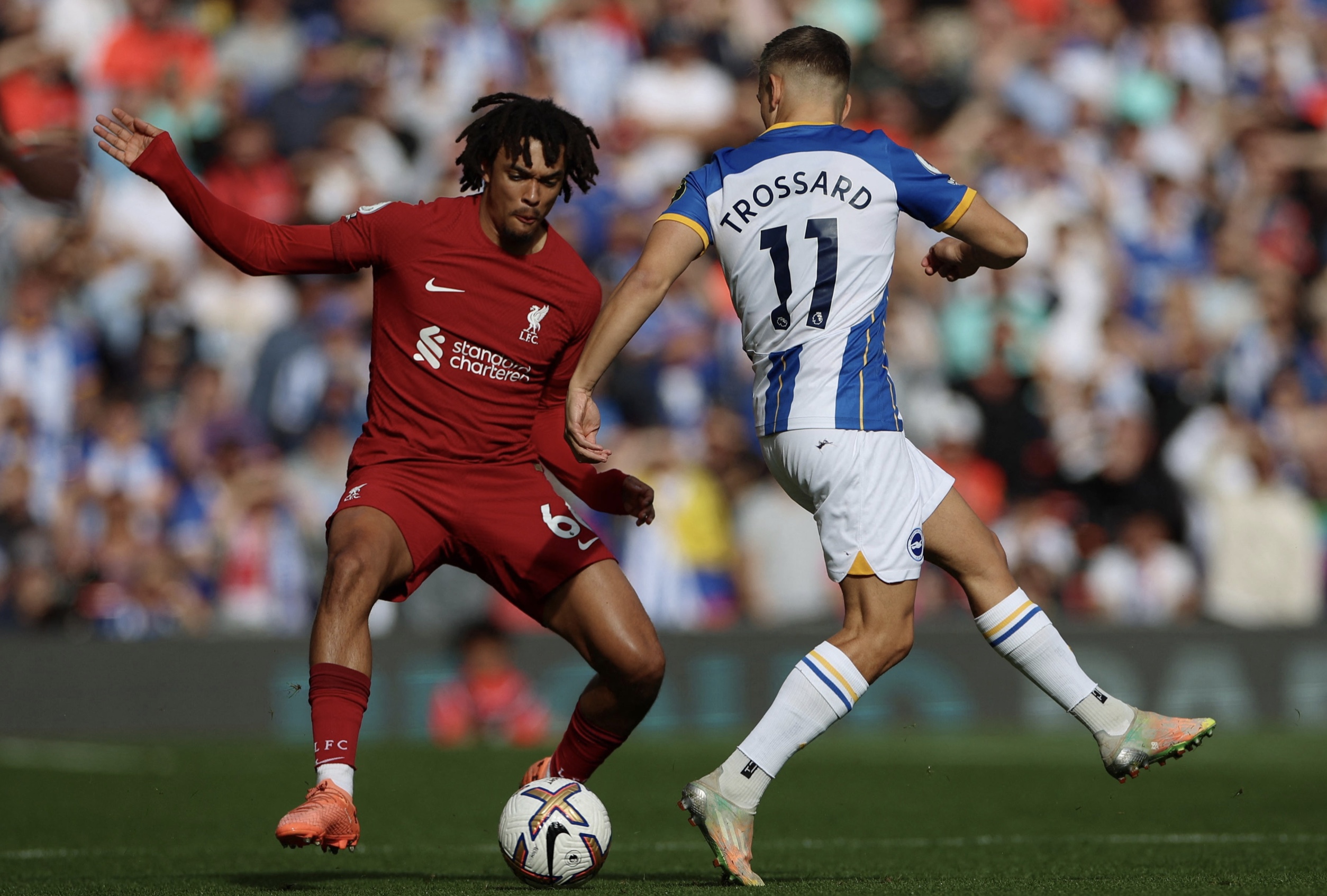 Cliche and hyperbole are common in modern-day football, but it’s hard to escape the conclusion, that this team have been asked to go to the well once too often, and that an apparent lack of ambition in the transfer market, is beginning to tell on an almost game by game basis. Errors, a lack of focus, insufficient energy, call it what you will, but when even Jurgen Klopp post-match, admits he had no real confidence his team would see out a game in which they’d somehow gone 3-2 ahead, it’s no surprise, that there was genuine anger and concern, amongst fans leaving a subdued Anfield, after this 3-3 draw.

In a game in which for long periods, Liverpool looked like they’d lose, it was ultimately concluded, due to an error by the worryingly out-of-form Virgil van Dijk, followed by James Milner falling asleep at the back post. The end result was that Trossard completed a hat-trick, despite Firminho having dragged his team back from a thoroughly humiliating two-nil deficit. In truth, having fallen behind yet again, and yet again, inside the opening minutes, a solitary point was probably as much as Jurgen Klopp’s men deserved, if indeed, they deserved that much. Had it not been for Alison, visibly angry with those in front of him, Brighton could have been out of sight inside the opening half hour.

Brighton’s hat-trick hero had put the Seasiders in front in the fifth minute, as confusion and indecision in Liverpool’s defence, reigned supreme. It soon got worse, with the visitors doubling their lead on fifteen minutes. Trent Alexander-Arnold, once again culpable with an error, which the ludicrous Gareth Southgate, will no doubt believe vindicates his appalling man management, of a player, Klopp rightly describes as world-class. Nobody would argue he’s at his best right now, just as Klopp doesn’t seek to deny that the young full-back needs to improve defensively, but to single him out, for his side’s very ordinary start to the season, is extreme, to say the least. After all, he’s hardly the only one in red lacking intensity, confidence, and the dynamism this team have made their trademark in recent seasons. Yes, it’s costing Liverpool dear, and in all likelihood, even this early in the season, has cost them any realistic tilt at the title, but there’s probably only Alison tight now, playing at the level he’s capable of.

So who, or what is to blame, for the malaise presently afflicting this squad? Well, certainly there’ll be those who’ll question a team selection that saw Nunez, Diaz, and Elliot consigned to the bench. Equally, a midfield that just doesn’t appear to contain sufficient mobility, simply couldn’t get to grips with a Brighton team who played through Liverpool’s often half-hearted press. Yet, this was the fifth time in seven Premier League games that Liverpool have dropped points, so yesterday’s display alone cannot explain why the passing is lethargic, a lethargy matched by so many players. It also cannot explain why we so often begin games in a manner that immediately gives confidence to the opposition. Intensity, commitment, purpose, all appear to be lacking, issues that have been there all season.

Bobby, so obviously not the player he once was, despite two goals here, no longer displays the guile and touch of old. Fabinho, seen arguing with an enraged Klopp, clearly requires younger legs around him. Henderson, amongst seven players involved for Liverpool, aged 30 or above, is also now beyond his best, whilst Thiago, had one of his less influential games. Few players are at their peak, whilst it’s simply not sustainable for the likes of Elliot and Carvalho, however good they one day become, to be expected to pick up the mantle so soon. Perhaps, had the club invested more substantially whilst at the top, the obvious drop-off in performances that are becoming commonplace, would not be so apparent.

Whatever the conversations that may have taken place between owners and manager, hasn’t Klopp earned the right to demand more FSG in the transfer market? After all, he’s certainly been expected to continually ask for more of players that have given everything, and more, for the club in recent years. If a failure to beat Fulham, Brighton, Everton and Crystal Palace, with two of those games at a previously impregnable Anfield, don’t reinforce that message, Liverpool’s next two league fixtures, away at league leaders Arsenal, and a Harland-led Manchester City, may well force the hand of owners apparently reluctant to sufficiently back the manager in the transfer market. The January transfer market may well require Liverpool to spend big, and an increasing number of fans, and probably Jurgen Klopp, will no doubt be thinking, not before time.