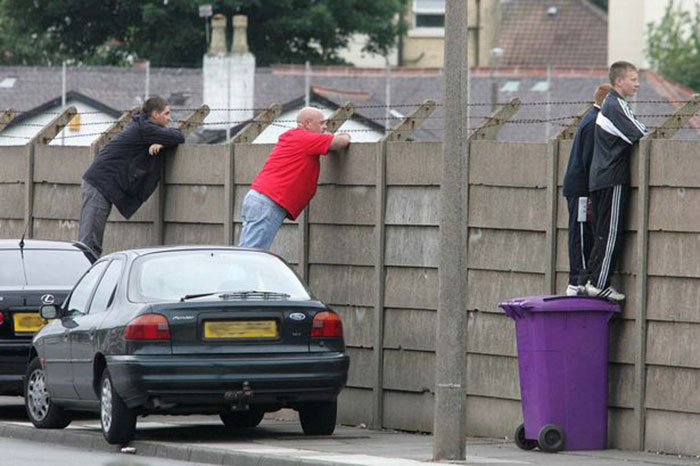 Should geography or the colour of your wheelie bin dictate which football team you support? Well to some people, especially on social media, specifically Twitter, it does. I’ve seen loads of people on said site berate people because of where they live.

“What colour is your bin? Really laaaaaa I’m asking you!”

What colour is your bin?? That was a genuine question that was asked by my mate to a couple of young Reds, and here’s the reason why he asked such a stupid question…

My friend decided to go on the train to watch the match one week. He usually drives to every match, home and away (except away in Europe, he usually flies then, or ferry). Well you get what I mean, he goes to EVERY MATCH. While on the train he was joined by quite a few other Reds (not all folk from North Wales are bitters you know) A couple of young lads asked him if he minded if they sat by him. “Piss off and sit somewhere else,” he thought and wanted to say, but said “Of course lads, park yourselves wherever you want”. What he heard next burned into his brain for hours to come. “Fuck me lad, I knew the train would be full of wools” one of them said. The second replied “it’s always the same, they shouldn’t start the train ’till Rhyl!”

Upon hearing this my mate decided to keep his eyes closed & reminisce about the days gone by when “real scousers” called the people from “the satellite towns” wooly backs (shortened to wool over time), who in turn would call anyone from outside them areas a wool. It brought to mind times when the Friday midnight Dublin express (Ferry train) would be full of Irish Wools. The 8am. 9am and 10am Saturday morning North Wales trains would be full of wools, (in fact anyone emerging from the Lime Street subway was a wool) but each would be heading in the direction of the Republic of Liverpool.

L4 was Liverpool – no other part mattered to these flocks of wools. They would want to get to the ground, take turns in the queue while the other went to get chips, a drink or toiletry needs. Gates opened at 1pm and then it was in like Flynn. As you got a little older, a pint in the Albert was a must for any hard faced 15-year-old wool.

The term “wool” was not such an insult back in the day. Today though, it’s branded about by people who don’t even have a “purple bin”! Whereever you live, the people who live outside of your town are called “wooly backs” “Joskins” “How gets” or the famous Welsh one about men who gain sexual gratification from sheep. But before you cast these exertions onto your fellow man, remember that the ones heading to L4 do so to support the very same team as you “purple bin” owners, and a vast amount of the wools have been going for a lot longer than you were even a twinkle in your father’s eye. I will gladly accept insults from anyone, who can genuinely say they or their dad, or even their grandad didn’t own a “3 Star jumper” or a pair of “brown Airwair boots”.

I will leave you with words I heard said about 1975/76. “I’m not going in the Kop no more laaaaaa. Have you seen all them wools in there, with their 3 star jumpers & that?” Hence the chant from “the Road end” about the 3 star jumper mob which went somethng like this to the tune of ‘Head, Shoulders, Knees and Toes’…

There’s a wooly over there. (Over there)
and he’s wearing brown Airwair, (brown Airwair)
with a 3 star jumper half way up his back, he’s a fuckin’ wooly back!

So, does it matter that my household refuge goes in a wheelie bin that’s green, black, brown or whatever colour, as long as the colour of the team I support is the same as you selected few purple bin owners?

PS My friend hasn’t missed a match for as long as I can remember. Also he didn’t attend his son’s wedding due to Istanbul.

Now, he is a proper WOOL!