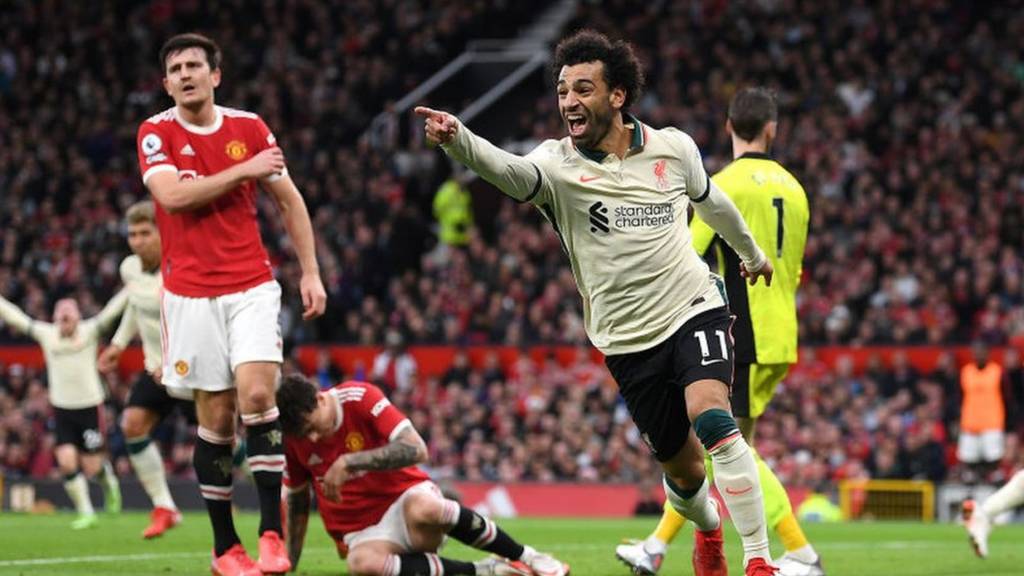 Liverpool’s biggest win at Old Trafford in 100 years, a hat-trick for Mo Salah, a result and performance that will be retold to generations of Kopites not yet born. What a day.

With Gary Neville describing the performance as ‘not acceptable’, in describing how United were obliterated, and the ludicrously overrated Harry Maguire, apologising to United fans, it’s difficult to objectively assess this thumping 5-0 victory.

How good were we? How bad were United? How important was the early miss by Bruno Fernandez? How out of his depth is Solskjaer? Just how good is Salah?

Firstly, Liverpool were exceptional, but only in patches; ruthless in front of goal, at almost every opportunity; and the red men displayed total belief in what they were asked to do by Jurgen Klopp. This was in stark contrast to a leaderless, dysfunctional, and embarrassingly inept display, by an opposition who were comprehensively outplayed.

The massacre started early, with Liverpool 2-0 up inside 15 minutes with the latter to be stretchered off the pitch, Naby Keita opening the scoring and Diogo Jota sliding in at the far post after 13 minutes. After 30 minutes the worlds best player entered the arena, which was soon to become a theatre of dreams for Liverpool fans worldwide.

Following another spate of keystone cop defending by the hapless Maguire and Luke Shaw, Salah scored with his right foot high into United’s net. At this point, with United becoming ever more ragged, Ronaldo lost the plot.

In chasing down the ball with Curtis Jones, who replaced the injured James Milner, he kicked ferociously at the stomach of the Liverpool midfielder, who thankfully had the ball wedged between his stomach and Ronaldo’s foot. Fortunately for United’s number seven, the referee merely flashed a yellow card, but make no mistake, the red mist had descended. Unfortunately for United, it soon got worse.

With just seconds to go until half-time, Salah got his second and Liverpool’s fourth. Again United’s defending was comical. Again Salah had all the time in the world to find the net, and as the half-time whistle blew, boos rang out from United fans who must have been both shocked and embarrassed by their team’s performance.

As the second half began, those like myself, who are always of a nervous disposition when facing our greatest rivals, wondered whether United might still be capable of a comeback worthy of the greatest showman.

Yet we needn’t have worried, as within five minutes Salah completed his hat-trick, with another right-footed strike, after Pogba was easily dispossessed on the halfway line. However, yet again, it got worse for United and Pogba.

Pogba, desperate to retrieve the ball during a rare period of sustained United attacking, went over the ball in an awful lunge at Keita. Not only did this result in a deserved red card for the French enigma, it also led to Keita leaving the pitch on a stretcher. I, and no doubt millions of others, must have then wondered just how many more Klopp’s imperious players would score?

Bizarrely, the answer was none. Indeed, the game petered out, with United content to fend off further humiliation, and Liverpool seemingly content not to heap further indignity upon their opponents.

Questions remain from this truly stunning result, chief amongst them, whether the hapless Norwegian will still be in charge of United in the next 48 hours? Equally, are we truly seeing the worlds best player in Egyptian talisman Mo Salah? The statistics and performances of the African would suggest we are, and we Liverpool fans are surely left to conclude, that whatever is holding up Mo’s new contract, must be overcome as soon as possible.

These are special times in the history of LFC, and this was a special once in a generation result. We have truly special players, and in Klopp, we have a truly special manager, and a man who I believe will soon be regarded as akin to the great Bill Shankly.