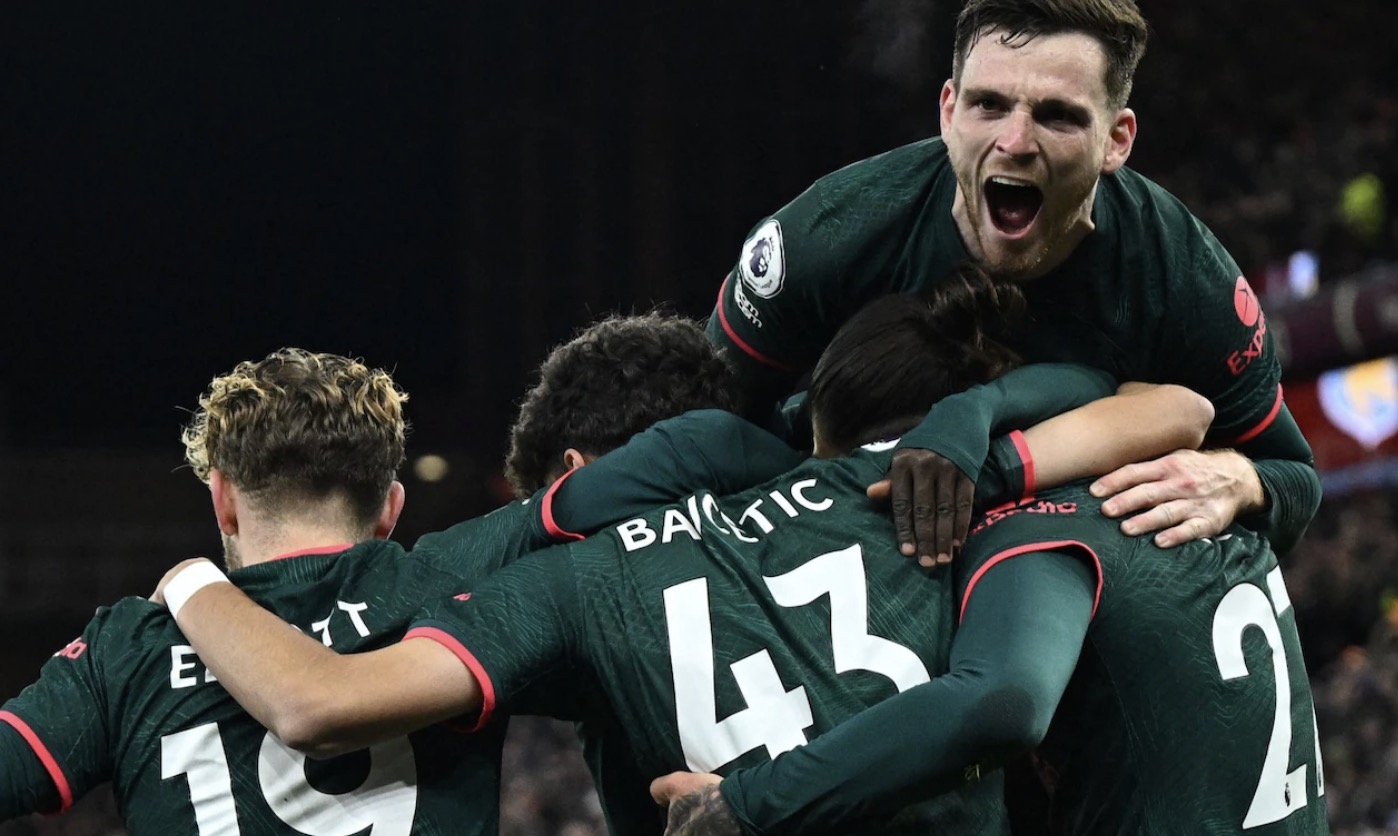 In a wildly erratic, though ultimately, man-of-the-match performance, Darwin Nunez helped seal all three points for Liverpool in the final ten minutes at Villa Park. A 3-1 away victory on Boxing Day was Liverpool’s third consecutive league victory, and with goals from Salah, Van Dijk, and Bajcetic, after a spirited second half from the home side, it was three points much needed and richly deserved.

Liverpool started quickly, not something we’ve witnessed too often this season, and what a beautiful goal it was. Trent ‘not good enough for England’ Alexander Arnold found Robertson with a sublime pass with the outside of his foot following a corner, and a first-time ball across the box for Salah was smashed home in the opening minutes. The game then became more akin to Basketball, as both sides squandered good chances, though poor finishing from Villa, and an inability to find the target from Nunez, meant neither goalkeeper was overworked. However, Liverpool’s pressure eventually told, with Virgil Van Dijk finishing from an acute angle with some aplomb. A kindly deflection from Mings helped the shot on its way.

Mings evening was not getting any better, as Nunez, continuously involved, ran Villa’s back four into the ground. A constant menace, though profligate in front of goal, he was at the heart of Liverpool’s many forays into the Villa defence. That’s not to say Villa weren’t causing problems of their own, and Liverpool’s defensive fragility eventually cost them early into the second half.

Beginning the second half sluggishly, Liverpool were penned back by Villa during the opening fifteen minutes of the second period. Ollie Watkins bagged the goal with a fine header on the hour mark, and with momentum and the home crowd on their side, Liverpool were under the cosh. However, they defended resolutely, and with Klopp making a few eyebrow-raising substitutions as the game entered the final fifteen minutes, introducing both Bajcetic and later, 17-year-old Doak, it was Nunez who played a huge role in finally seeing off Unai Emery’s men.

Playing on the counterattack, Liverpool broke, and as Nunez rapidly chased down his own first touch, he pulled the ball back from the by-line, and Bajcetic, displaying balletic grace, somehow squeezed the ball home. Once again, it was Mings who suffered further indignity, as the left foot strike squirmed through his legs and nestled into the back of the net.

With Henderson, Thiago and Chamberlain having departed during the second half, the Liverpool eleven that saw the game out, had its average age reduced further, when the former Celtic protege, Ben Doak was given a chance to impress in the final five minutes. It was an opportunity he certainly took, turning his left-back inside out on the half-way line, before sprinting a full fifty yards, before winning a corner as full-time approached.

So three consecutive league victories for the first time this season keeps Liverpool in the hunt for the top four. Two more league games over the festive season, with another away trip, this time at Brentford, included, give Klopp’s men a big opportunity to climb the Premier League table still further, before the start of their FA Cup defence at home to Wolves.