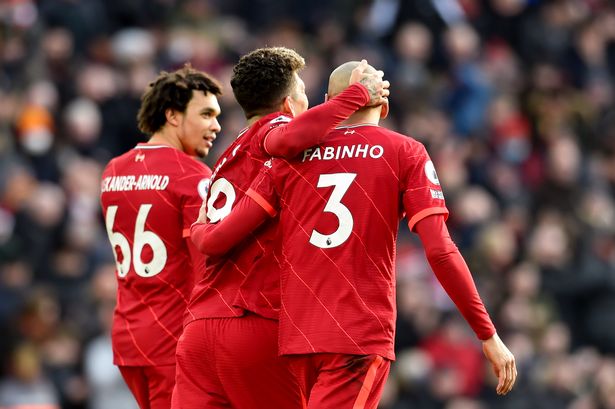 We all were worried it would be a struggle. With much of the attacking threat gone to seek glory in AFCON, most Liverpool fans were apprehensive about the games in between. After the slow and uninspired display against Arsenal, the team needed a response. Klopp’s fist pumps to the crowd showed what this meant to him and to the season. Running the risk of being stuck in neutral is not an option. At all costs, Liverpool must continue to pick up results so that when Salah, Mane and Keita return, it’s to be the push toward cups, not just next season’s rankings. Today Brentford gave us such a platform and for a while, it felt like once again the team would have to claw and scratch just to get a result.

Thankfully that wasn’t the case, as Fabinho continued his surprisingly rich goalscoring form and away the Reds went. The crosses were much more direct and devastating from Robbo and Trent, resulting directly in the second goal, well taken by the Ox. Now the worry becomes how bad his ankle is. Losing him would put a team already very short upfront at an even greater risk. The timing of the Minamino tap-in could not have come at a better time, therefore, as he’ll surely be featured in the second leg at Arsenal and his confidence must be high.

A brief word about Bobby Firmino now. So much is made about how for a striker, he just doesn’t score enough goals and yes, that would be an issue at most other clubs. However, what he brings to the table is so much more than just goals. The third goal was a direct result of his counter-pressing prowse, stealing the pass away and then being unselfish enough to set it up for Minamino to get his birthday goal. When Liverpool are humming, it is almost always because of plays like that, which Firmino embodies in body, soul and mind. He’s been a magnificent servant for the club and needs to be celebrated.

Matip continues to make his trademark runs forward as well, and to the delight of the crowd has begun to seem keen on actually shooting at the end too. His form has been one of the foundations to the team’s success this season. Van Dijk is obviously the rock the team is built on, but to be fair, he hasn’t fully reached his peak form yet and Matip has more than made up for that. When both of them are marshalling the opposition, it makes the entire match so much calmer…until you start worrying about scoring goals again.

Brentford for their part were brave. Instead of packing it in and making Liverpool play through them, which has proven time and time again to be the team’s biggest weakness, they threw on more attackers and really opened up the game. This style is exactly what Liverpool thrive on, especially at Anfield and the result showed. Controlled chaos, with willing runners and the ball being stolen in the midfield, is a Klopp staple. When teams play this way, all the chances Liverpool inevitably create tend to pay off. Brentford have made a fun addition to the league so far and I am rooting for them to stay up.

Looking ahead, the return leg against Arsenal looms large. With a cup final in sight, Klopp will almost certainly field a strong XI. The real hope is that Arsenal come out wanting to attack as well and the game is open. Ironically in the first leg, the Xhaka red card actually played against Liverpool as Arsenal just went behind the ball and never really took the game to that level of chaos that as just mentioned is where Liverpool thrive.