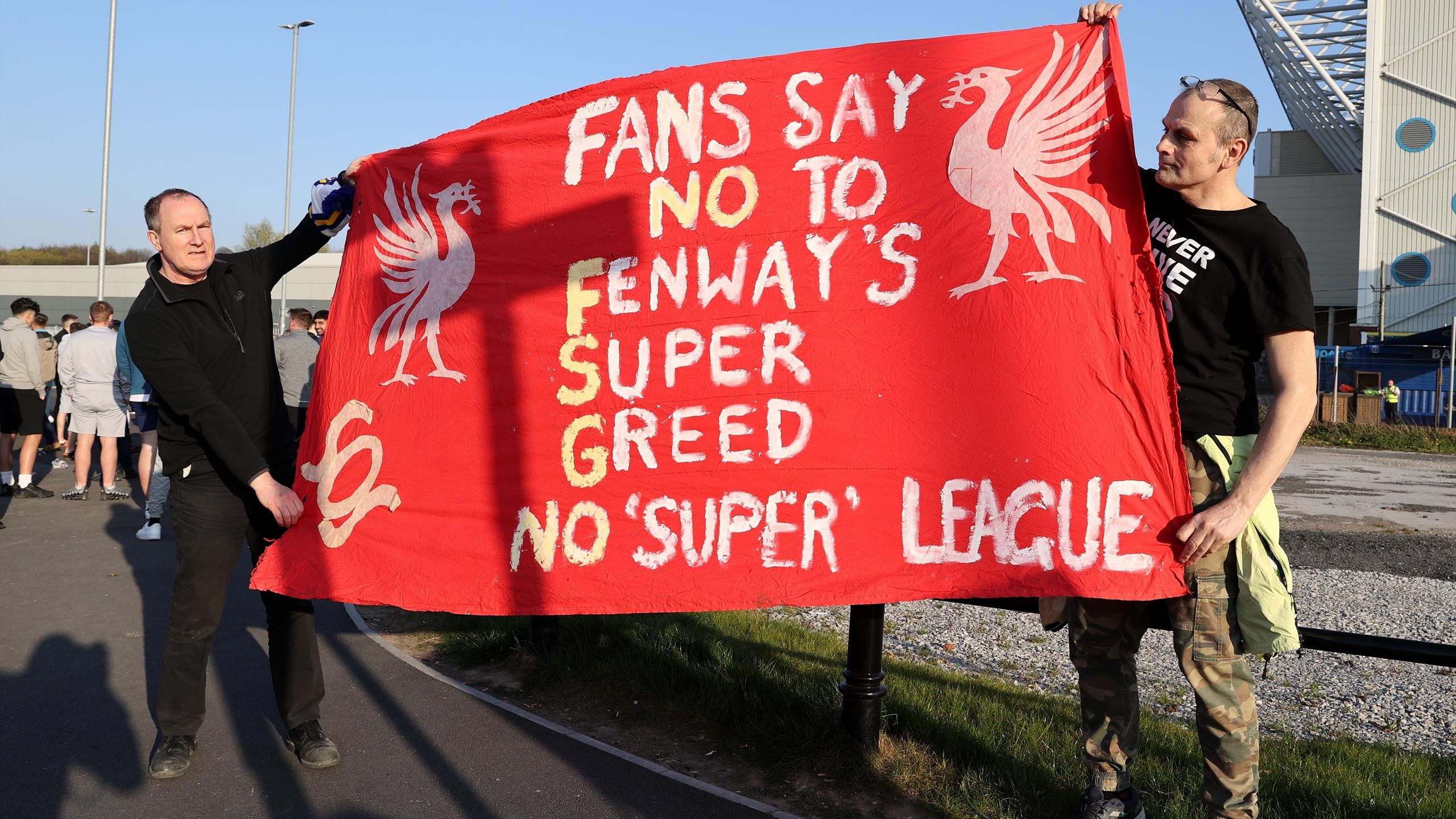 Everything is politics. Politics is everything.

Not six words I ever expected to write when opining about football.

I’ve felt for some years now, that a European Super League is inevitable. It doesn’t mean I like it, support it, or welcome it. In fact, I have no fixed opinion either way, but my romantic notions of a bygone age, when I queued up as a nine year old boy, stool in hand, on a cold night to enter the hallowed Anfield stadium, to watch my heroes defeat St Etienne, are just that, long since passed romantic notions.

They are notions that haven’t really existed since the advent of The Premier League. A competition, let’s not forget, that when initially floated, largely at the behest of at least four of the six English teams now behind the ESL, was criticised for many of the reasons now being deployed to attack the principle of establishing the ultimate elitist ‘competition’.

So how did we get here?

Liverpool were on the brink of continental glory. Socialist, Bill Shankly, was about to witness the birth of his red army becoming European royalty, yet my home city, where I was born and grew up, was soon to be on the brink of sharp and rapid economic decline. Indeed, just up the East Lancs Road, Manchester would suffer economically too, as would large swathes of Northern England. The old certainties of a permanent, relatively well paid job, of a decent home, security in old age, and expanding meritocratic opportunity, were to be swept aside by ‘the market.’

Thatcher put everything up for sale, the ‘City’ was lauded as a shining beacon of mammon, its immorality and dubious practices went largely unquestioned, and the masses were thrown the odd bone of cheap shares in the nation’s assets that we all once owned, to disguise the greed and money grab of an increasingly small elite. Sound familiar?

As the only crime became getting caught, our nation’s assets soon fell into the hands of foreign, largely unregulated and unaccountable owners. We were encouraged to believe that ownership didn’t matter. Wealth alone should be respected. Co-operation, community, society, became devalued. All that mattered was your ability to pay.

It was into this fracturing society of rising inequality, and opportunity increasingly dependant on the size of your bank balance, that the Premier League was born. Liverpool, United, Arsenal, soon to be joined, indeed, surpassed, by the roubles of Abramovich’s Chelsea, took an ever-bigger slice of the commercial pie on offer. The revenue and profit-making opportunities afforded by Sky TV, the influx of foreign fans gorging on club merchandise, and the proliferation of internet-based profit streams, widened the gap ever further between the ‘big six’ and the rest.

All the while, society mirrored the shiny new Premier League. As fans were asked for, and delivered, more and more money, into the hands of a now growing number of foreign, often absent landlords (council house sales anyone), English football clubs, though largely the ‘big six’, became billion-pound concerns, looking to the Far East for yet more profit, just as employment practices and de-regulation more often witnessed in the Far East, were imported wholesale into Britain. The concept of caring for the disadvantaged, compassion for one another, the provision of a safety net that assisted rather than trapped the increasing numbers left adrift by an economic and societal model that stripped away everything that hindered further profit, was derided. To even suggest that the wealthy elite should pay in a bit more, and take out a little less, was to be called naive and unrealistic.

The final ignominy of Northern industrial towns, hollowed out by decades of fluctuating, poorly paid, low skilled, non-unionised employment, turning to Eton elitist charlatan Boris Johnson, arrived in 2019. Those often left behind, exasperated, and scarred communities, exploited by the easy blame game employed by Farage and his cohorts in the right-wing press, were cajoled into voting against their interests yet again, by the deceitful slogan of ‘let’s get Brexit done’.

Of course, the catastrophic pandemic, coupled with the self-harm of EU exit, harmed poorer, less secure, more transient, and generally less healthy areas of England, even more. Yet those areas, traditional bastions of working-class football support, keep paying their money to cheer on their local clubs. Newcastle, Sunderland, Middlesbrough, amongst others, still attract support out of all proportion to their success. They see the riches on offer to Liverpool, United, City, Arsenal, Chelsea and Spurs, and naturally want a slice of the pie. Many no doubt just wish their clubs were good enough to ever be considered as participants in a European Super League.

And there’s the rub. Whilst the likes of Dion Dublin, encourage us all to exploit the income-generating possibilities of refurbishing and renting out property, then bemoans how fans are being exploited by ruthless money men, who own elite clubs and are only interested in profit, others, like Tory voting Geoff Stelling has suddenly developed a social conscience. Without a hint of irony, Stelling implores us all to face down the profit greedy big six owners, just months after the tv channel he works for tried to fleece fans of £20/30 to watch Burnley play Sheffield Utd, on top of a subscription service, first introduced by Sky TV.

So do I want to see an ESL? Well, not one that denies proper competition. The jeopardy of relegation for all must be maintained. Opportunity for promotion for any club to such a league should exist, the integrity of domestic leagues must be maintained, and owners who describe us oldies as ‘legacy fans’, and are treated as little more than an inconvenience, must be legislated out of the game.

Let’s change the ‘fit and proper person’ test (if it ever was a test). Let’s change the law on ownership to create clubs owned by fans. Let’s have significant and meaningful fan representation on boards. But let’s not pretend that UEFA, who overnight seem to have discovered a moral purpose, care about anything other than power and money. Let’s not take any lessons on morality from FIFA, an organisation that exemplifies the crony capitalism so many are at the mercy of. Further, let’s not pretend that those such as Stelling, apparently unconcerned by profit-driven exploitation elsewhere in society, have had a change of heart on the road to Damascus. Above all, let’s not pretend, though he undoubtedly will, that Boris Johnson, presently dolling out billions in public money to his mates, who themselves are busily exploiting the commercial opportunities of a pandemic that’s killed over 100,000 people, is on ‘our side’.

Football long since sold its soul. We, as a nation, long since decided almost anything was up for sale to the highest bidder. Along the way, we also decided that lower levels of integrity, probity, and decency were acceptable. That a belief in the greater good, co-operation, strength through solidarity, and date I say, Shankly’s oft-quoted socialist belief that ‘all should share in the profits, were dispensable. Merely old fashioned, profit hindering principles, best consigned to history.

If the idea of a European Super League, encourages more of us to question wider society, and the increasingly rotten values that debase us all, it will have served a purpose. The thrust of political and economic philosophy that has encouraged the already hideously powerful and wealthy to propose the ESL, are those that have led to a chasm of inequality, to food banks and an epidemic of homelessness, and to many turning a blind eye to government ministers shovelling public money to their mates, whilst those with some power to hold them to account, just shrug their shoulders.

Politics is everything. Everything is political.

Oh yeah, Liverpool threw away 2 precious points in the dying moments against a second-half resurgent Leeds. Yet rather tragically, it may not matter one jot, as Liverpool have shamelessly negotiated themselves a permanent place at the European top table, irrespective of their league position.