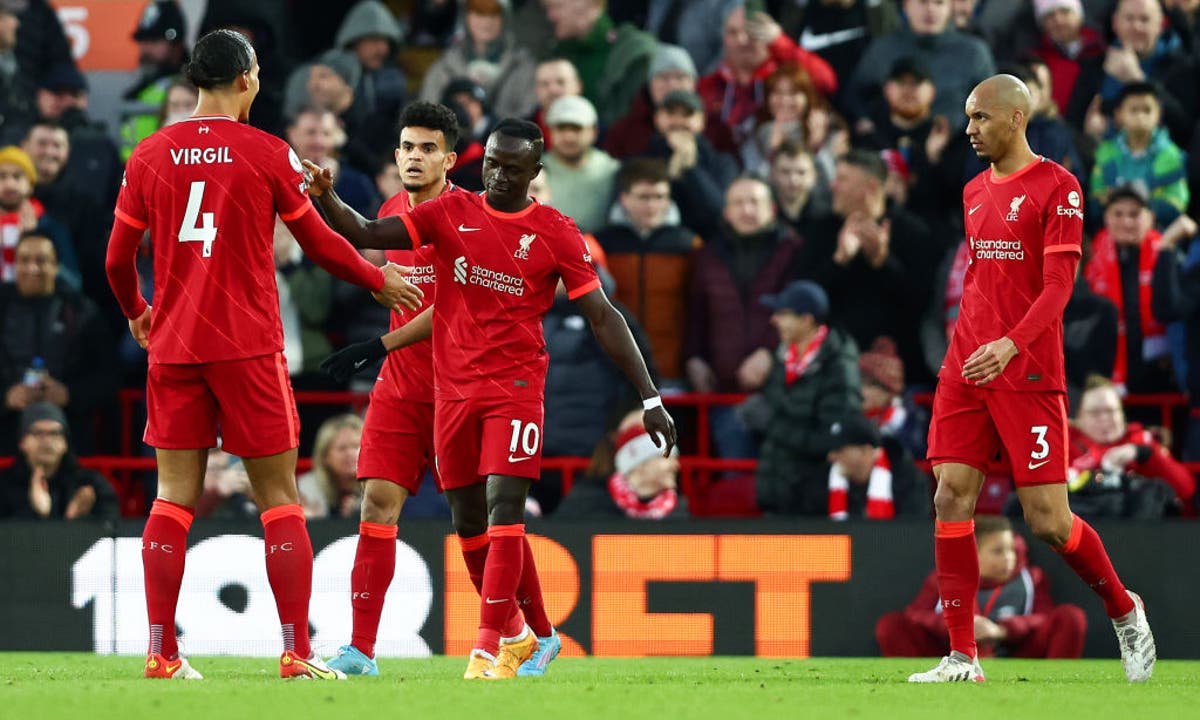 Sadio Mane’s close-range 27th-minute goal, from a Trent Alexander-Arnold half-volleyed penalty box cross, proved the defining moment, as Liverpool took all three points, to keep the pressure on City, ahead of the Manchester derby. West Ham though, who created a host of good chances, against a clearly fatigued home side, may well feel that they should have been travelling back to London with something to show for their efforts.

Making wholesale changes from the side that defeated Norwich in the mid-week FA Cup tie, Klopp opted for Mo Salah, Mane, and Luis Diaz up front. Salah, not at his best again, following his muted display at Wembley, missed a glorious chance as early as the second minute. Bearing down on goal, from a quickly taken free-kick, Fabianski thwarted the Egyptian, who just minutes later pulled another presentable opportunity well wide of the upright. It was to prove a frustrating night for the league’s top scorer, who along with Mane, struggled in both retaining the ball, and in finding a teammate with his passing.

However, Liverpool deservedly took the lead on 27 minutes. Trent Alexander, who may well have been shooting, took his assist tally to sixteen, as his half-volley across the penalty box found its way to the Senegalese. Liverpool should have perhaps made it two-nil just five minutes later, as Diaz, picking the ball up on the halfway line, bore down on goal, and it took a foul challenge on the edge of the penalty box to halt his progress. A minute later, a goal-line scramble again saved the Hammers from falling two behind, and Liverpool’s continued profligacy in and around the eighteen-yard box, ensured that a slender one-goal lead was all that separated the teams at half-time.

West Ham, no doubt encouraged by their first-half display, really should have taken advantage of a rare Van Dijk error early in the second half, but with Bowen seemingly about to score, he was thwarted by a last gasp tackle from Robertson. The Irons then went on to miss an even better chance on seventy minutes. Lanzini, with time and space, and just Alisson to beat, somehow hit his shot into row Z from just yards out. Liverpool were by this time looking nervy; they looked both physically and mentally fatigued, were lethargic in their passing, and at times played too narrow. They put pressure on themselves with poor defensive heading, and the fresh legs of Jota, on for Salah, made little difference.

As time ticked by, and with five minutes of injury time added on, Milner made another appearance from the subs bench. Liverpool though continued to be wasteful in possession, conceded too much space, and West Ham had further scoring opportunities from corners. Yet, with more than 96 minutes on the clock, referee John Moss brought the game to an end. An invaluable three points had been ground out, and approaching the last quarter, of what could yet be a historic season, another Premier League title is a distinct possibility, and the Champions wall at Anfield, already updated once this season, with our ninth league cup triumph, may need amending yet again in May.