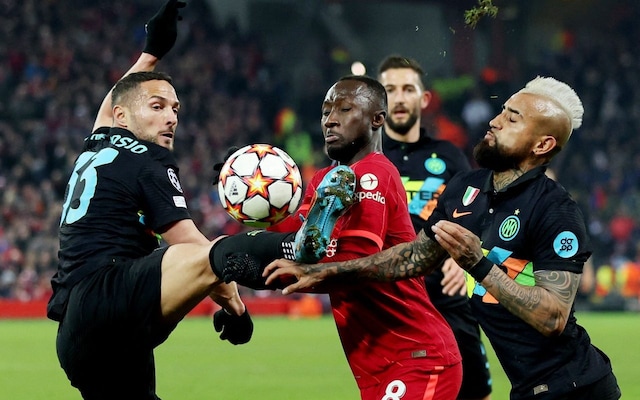 In what can most positively be described as an indifferent performance at Anfield, deservedly losing 1-0, Liverpool progressed into the last eight of the Champions League. Perhaps had Alexis Sanchez not seen red in the second half, it may have been the Italian champions celebrating, but a 2-1 aggregate victory was enough for Klopp’s team to still be in with a chance of a historic quadruple.

Liverpool, having never been eliminated from European competition, after being two up from the away leg, started with four changes from Saturday’s victory. Matip, Thiago, Jones and Jota, none of whom shone, started the match, but nobody in a red shirt played with the necessary attacking intent to lift what was a subdued display. Too much backwards passing, insufficient intensity, a greater desire to avoid conceding, rather than to score, infected the whole team. At times, the front three were at best poor and Sadio Mane, in particular, was awful. In fact, Liverpool were so poor in attack, it was thirty minutes before they threatened the Inter goal.

It was Matip, who later was largely responsible for Inter getting back into the tie in the second half, who almost put Liverpool one up, as his header from a corner, rattled the bar. The first of three occasions in which the home side would hit the woodwork. Inter themselves also came close as the second half came to a close, when Jota, not alone in a red shirt in appearing to be able to control and protect the ball, gave away a sloppy free-kick just outside his own area. Thankfully, Alisson was alive to the free-kick that was whipped across the box, and whilst Trent Alexander Arnold also went close from a free-kick during injury time in the first half, the sides went in all square at the interval.

Ambrosia began the second half for Inter, and those of us who may have expected to see the cream rise to the top in the second forty-five minutes were to witness Mo Salah twice hit the post and, on sixty-one minutes, Martinez score a stunner. Matip gave the ball away up the line, Van Dijk merely waved his foot as Martinez approached, and a sliced shot alluded Alisson and flew into the corner of the net. Suddenly Inter had the momentum, but that momentum dissipated as Sanchez, perhaps fortunate to remain on the pitch when yellow-carded in the first half, picked up a second yellow with just twenty minutes to play.

Liverpool’s unconvincing performance though continued in the final moments. Diaz, in keeping with proceedings, missing a glorious chance to score in the dying minutes and to settle the nerves of the home support. Five minutes of additional time didn’t do too much to settle the nerves either, but the referee, who also had a poor night, eventually brought this two-legged encounter to an end. Liverpool had suffered their first home defeat for more than a year, and in truth, probably deserved to, but it’s their name in the hat for the next round, though Klopp and his charges will be all too aware that they cannot afford another display like this if they are to add more silverware this season.