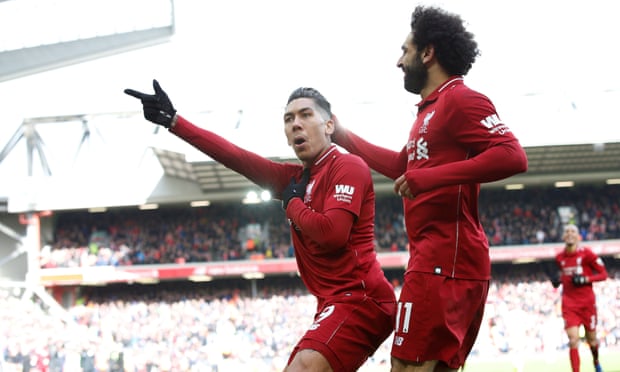 Three points against Burnley to keep the pressure on. The title winner isn’t yet written in stone. Against a Burnley side full of fight, just a shame the officials have such poor eyesight. The governors of the game want to change the rules, but in reality they look like fools. The Good, The Bad and The Ugly. Another week reviewed at the world’s favourite football club Liverpool F.C.

Keeping the pressure up on Manchester City with the win over Burnley this afternoon. It wasn’t pretty, but it was effective.

Jürgen Klopp gave a start to Adam Lallana who joined Fabinho and Gini Wijnaldum in a three-man midfield. To be fair, the 30 year-old had a decent game. That said, I still feel there are better options in the squad.

Despite going a goal down to after a blatant foul on Alisson Becker, Liverpool ran out worthy winners with two goals from each of Roberto Firmino and Sadio Mané to put the game beyond doubt.

At 3-1 Burnley pulled one back, only for Mané to round the ‘keeper and slot home. A thoroughly deserved win and worthy response to leaders Manchester City’s win against Watford yesterday.

One ironic point was that the conditions today were arguably worse than those last week when Klopp complained about the wind at Goodison Park. Today’s game started in sunshine before transitioning to torrential rain and wind. Just shows, if you play your game and win, it really doesn’t matter.

The first goal scored by Burnley today. Alisson was clearly impeded and prevented from jumping by the Burnley players and yet the linesman (I refuse to use the term “referee’s assistant”) and the referee himself allowed the goal to stand.

The sooner they bring Video Assisted Refereeing to the Premiership the better. To allow this goal to stand was nothing short of scandalous. I just hope the title race doesn’t come down to goal difference this season as that decision – or lack of it – could have a huge impact.

what I also don’t get, is why Sean Dyche complained about Firmino’s equaliserafter such blatant cheating from his side. It never ceases to amaze me how ridiculously and unashamedly biased managers can be. The same goes even for Klopp at times. On occasion their behaviour is unacceptable.

Surely they don’t expect sympathy in these situations? Frankly, it’s childish and it’s about time people in their position showed a little more class, humility and fairness.

Footballs governing body – well so far as rules are concerned anyway, the International Football Association Board (IFAB) will make changes to the current rules to prevent time wasting and gamesmanship. Under one of the new rules, players from the attacking team will have to be at least one metre away from the wall when a free kick is being taken.

After today’s events, perhaps they would consider the same from corners also because it’s often like a rugby scrum nowadays in football. The rule should apply to all set pieces. Virgil van Dijk is often a victim of opposing defenders holding his arms and jumping over him at corners. It’s beyond belief that the referees or linesmen never see these things.

IFAB New Rules:
– No rebound after penalties
– Substituted players can walk out of the field from anywhere
– Managers will be cautioned with yellow/red cards
– Any form of the ball hitting the players hand won't stand as foul
– Attacking players won't stand in a free kick wall

One thing that was pleasing today was the reception the Anfield faithful gave to former Red Peter Crouch. A classy touch. Just a shame the managers don’t follow the example too often.

Next up we have two games on the road. Firstly, a hop over to Bavaria to take on Bayern Munich. Should make for an interesting one. And secondly, a trip down to west London to visit Fulham. I know which game I’d rather win. As of now, we are in hot pursuit!