Liverpool FC – The Good, The Bad and The Ugly – Week 2 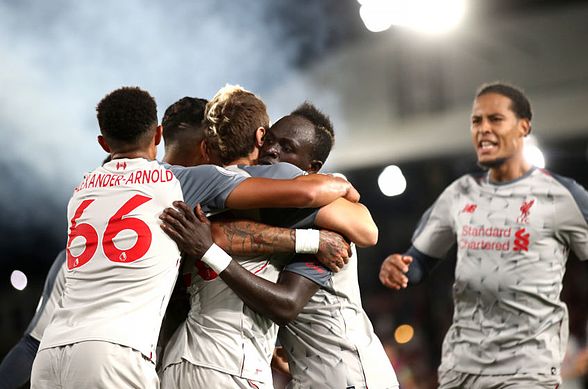 The Reds record a win once again, with the bogey team truly slain. The Dutch man-mountain is Man of The Match, for battening down the defensive hatch. An error-prone ‘keeper is shown the door and unlikely to play for the club anymore. The Good, The Bad and The Ugly, another week reviewed at the world’s favourite football club Liverpool F.C.

Two wins in a row to start the season and another clean sheet to boot. Joint second place on goal difference too, notwithstanding the fact that the Reds are one of six teams all with a winning start to the season.

Over the next two or three games, this will surely change and all being well Liverpool will remain in the mix. Yesterday’s result was a good one, for Crystal Palace are no pushover and haven’t lost since losing to Jürgen Klopp’s men at the end of March. So far the omens look good for the Reds.

I’ve looked back over the last 10 seasons and there have only been two occasions when Liverpool have had two wins on the bounce at the beginning of the season. However, on both occasions, Liverpool had only scored two goals. A feat they bettered after 53 minutes of this season.

Virgil van Dijk won the BBC Man of The Match award and this also is a huge boost. The big Dutchman has made a huge difference to this Liverpool side and his partnership with young Joe Gomez looks to be shaping up nicely.

In fact, together with Trent Alexander-Arnold and Andy Robertson, this Reds team look as if they have the making of a mean back four for years to come.

Liverpool made it two wins from two this season with a 2-0 victory away at Crystal Palace.

Twitter was quick to react to Mourinho’s men getting pooped on by the Seagulls -Brighton & Hove Albion, in this weekend’s 3-2 defeat at the Amex Stadium. Mourinho was given the dreaded Vote of Confidencetoday, so he’ll likely be sacked soon. Personally, I’d keep him. He’s the right man for the job.

Liverpool host Chris Hughton’s side this coming Saturday in the late kick-off so I’m hoping I don’t have egg on my face. Whatever happens, I’m going to enjoy the moment. Comedy, as they say, is making light of others’ misfortune. How true.

Not ugly per se, but this is the one Achilles heal Liverpool have this season. The goalkeeping situation. Word is that Loris Karius is leaving to Besiktas on loan for the next two seasons with an option to be sold permanently thereafter.

The fact that The team only has Simon Mignolet as competition for Alisson leaves me more than a bit concerned. Don’t get me wrong, both The Belgian and Karius can go for me. The problem is that leaves little/no back up for the current number one.

Karius not in the Liverpool squad tonight as he’s off to Besiktas.

Jurgen Klopp will not be at the game either as he’s bringing Karius to Turkey himself.

My pre-season preview bemoaned the fact that Danny Ward was sold to Leicester  City – arguably a direct(ish) competitor. In my opinion, he was the best option to challenge Alisson and I’m struggling to believe that that was good business from Liverpool.

The Reds are one ‘keeper injury away from squeaky-bum-time for the duration of Alisson being sidelined. So completely not good and I hope this doesn’t come back to bite Liverpool in the a&rse.

On paper, Liverpool have a (relatively) easy game to come on Saturday. On current form, you’ve got to fancy the Reds to take all three points and send the Seagulls packing.

Football, as we know, however, is played on grass and not paper. Let’s see how this one turns out. Having beaten Manyoo, this is by no means a walkover.