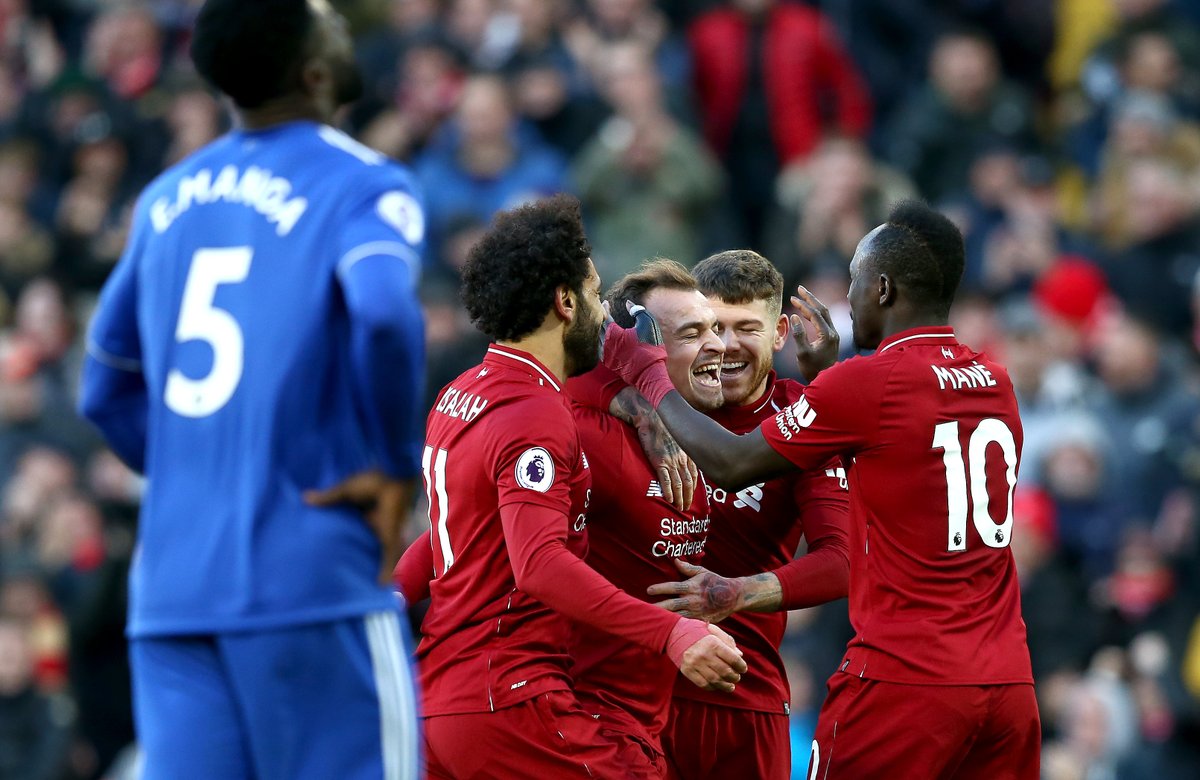 The Reds put four past Red Star in the week, the same against Cardiff on was definitely no freak. Magic Mo returns to form, three goals in two games is again the norm. Liverpool fans are sick of their number 20, and give him stick aplenty. The Good, The Bad and The Ugly, another week reviewed at the worlds favourite football club, Liverpool FC…

Scoring eight goals in the last two games. OK, the opposition has not been the toughest, but a team can only beat what’s in front of them. Liverpool have done that in clinical and efficient fashion.

Yesterday’s 4-1 win over Cardiff City took Jürgen Klopp’s team back into first place. It may only be temporary, given that Chelsea and Manchester City play today and Monday respectively. Fact is, the results for those guys are not assured. Liverpool’s is.

Mane puts @LFC back on top of Premier League. Watch all the highlights from Anfield here #LIVCAR https://t.co/PHa1WHjR8K pic.twitter.com/gQBXQ2TptD

It was nice to see Mo Salah getting among the goals again. A goal yesterday in addition to his brace in the week hints that the little Egyptian is returning to form. Sadio Mané scored two fantastic goals yesterday in a game they were expected to win. Without sounding cliched, it really could have been more.

Xerdan Shaqiri scored his first premier league goal for the Reds so he has to get a mention. An all round good team performance and without really getting out of third gear. A small blip for the goal conceded but that was more down to luck than judgement on Cardiff’s part. As always, one exception. The not so curious case of Adam Lallana.

Adam Lallana. Oh Adam Lallana. He’s had better games for sure. The Liverpool number 20 came in for some considerable stick in social media for his display against Cardiff.

Is Lallana even playing? #LFC #LIVCAR

Lallana having zero impact on this game. Time for some Shaq, methinks. #LIVCAR #bbcfootball

Hey lallana off. Preferably to the glue factory. #lfc #LIVCAR

It’s fair to say the ex-Southampton midfielder had a bad day at the office yesterday. In fact, he seems to be having quite a few of those of late. Lallana is the shadow of the player we saw a couple of seasons ago and it seems – in my opinion at least, that he’s nearing the end of his (Liverpool) career.

Since returning from his umpteenth injury, he really is struggling to impose himself on games. Against Cardiff, I think he gave the ball away more than Santa gives presents at Christmas. Other than a headed effort that was cleared off the line, a pretty unremarkable performance.

In comparison to Shaqiri, Fabinho or even the old stager James Milner, Lallana doesn’t really bring much if anything to the team right now. Sad really. I’m sure Klopp will have noticed the level of input yesterday. This season, barring any sudden return of form and ability, will likely be Adam’s last.

If we’re talking in terms of how your knee would look after playing against this former Liverpool midfielder then yes. But actually, I’m talking about the interview Graeme Souness gave to Sky Sports on Monday Night Football last week. Not ugly at all, just genuinely worth a look.

I have to say, I was mightily impressed. His honesty and openness was frankly quite moving. I’ve often disagreed with much of what Souness has said in the past… well, and current for that matter. If I’m also honest, it’s largrely based on his time as manager of the club between 1991 to 1994.

During this time, I think it’s fair to say that the 65 year-old alienated a few players and fans alike with his management “style” (let’s call it that). He’s a very passionate guy. There’s no doubting that. Souness reflected upon his time as manager and admitted making some huge mistakes whilst there.

Principally this was around trying to bring change to the club and (reading between the lines) his (perceived) attitude toward the players and the club at the time. He referred to trying to “change things too quickly” and his “deep regrets” about his time as Liverpool manager.

And of course, having said and done things that “perceived by some people to be something that I’m not” which “hurt him deeply”. Words from a man that has clearly sat down and properly reflected upon his time in the game and life. Huge respect to Souey for that.

In summary for this week, we can have high hopes for this season. As you know, my barometer for the rest of the season is always the 10-game mark. At this point we can be confident going forward.

Up next we have the small task (NOT!) of facing the Arsenal at the Emirates on Saturday. The Gooners are in a rich vein of form right now so this will make for an interesting one.