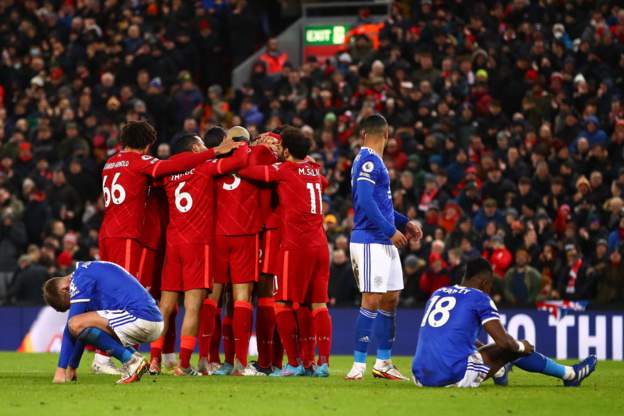 A debut that showed much future promise from Diaz, a brace for Jota, three points, and a clean sheet. The highlights of a very pleasing display by Liverpool, and City still in our sights.

With substantial changes to the eleven that started against Cardiff, Klopp chose to start with Colombian forward Diaz. Salah, who rushed back from final disappointment in Cameroon, was benched, whilst Firminho started upfront with Jota. Curtis Jones, again looking a little off the pace, started in midfield, whilst Thiago started his first game of the year.

Lacking in intensity in the opening thirty minutes, it was a parried clearance from a Van Dijk header that led to the first goal. Schmeichel could only push the ball out to the Portuguese striker, who slammed it into the net from six yards. Other opportunities were created, with Leicester offering little, without Liverpool carving the opposition open, and Klopp’s men went in deservedly ahead at half-time.

Expecting changes in the second half, it was twenty minutes before Salah and Elliot, again impressing, replaced Firminho and Jones. Leicester, who by now where almost continually camped inside their own half, where having to rely upon Schmiecel’s reflexes, along with the apex of bar and post, which got in the way of a curling, rasping, dipping effort from the Egyptian King.

However, heading into the final ten minutes, it remained one-nil, and whilst Rodger’s men lacked forward thrust, a breakaway goal was always a possibility. Thankfully up stepped Jota once more, who letting a cute forward pass from Matip run across his body, slotted home from six yards.

Minamino came on for Diaz in the dying minutes, who received a standing ovation from all four sides of the ground. A huge beaming smile ran across Klopp’s face, as it did the Colombian, as they embraced. The points were secure, Liverpool kept a clean sheet, and the title race is still on.