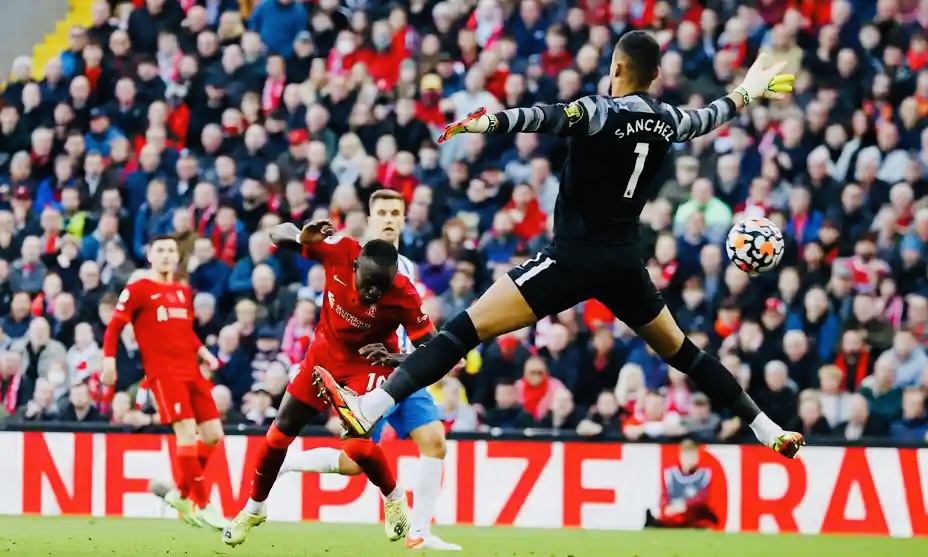 At 2-0 up, with early first half goals from Henderson and Mane, what appeared to be a routine home win for Liverpool, turned on three big moments, that gave Brighton belief, and exposed the limitations of Klopp’s squad.

A sublime eighteen yard strike from Jordan Henderson inside five minutes had given Liverpool the lead, and though Mane’s headed close range effort saw the home side double their lead, Keita’s injury, that forced him to leave the pitch, completely altered the balance of the match. The control of midfield, marshalled by Liverpool’s captain, had gone. Ox, who came on for Naby, though he set up Liverpool’s second, offers little defensive nous, and with Curtis Jones caught on the ball time after time, Brighton played further forward, before being the beneficiaries of VAR.

With the seagulls defenders and goalkeeper dawdling on the ball, Mane pressed, and in an almost comical turn of events, the ball rebounded off Sadio from no more than a yard from the goal line. Three nil. Game over. Job done. But….

The intervention of VAR led to the goal being ruled out for hand ball, and just minutes before half-time, a long range effort from Brighton sailed into the net, with Alisson apparently losing the flight of the ball in the autumn sunshine. Game on.

Brighton began the second half on the front foot, and stayed there for the next forty five minutes. With Lallana helping to dictate play in the middle of the pitch, Graham Potter’s men posed a constant threat. They exposed Liverpool’s lethargic back line on numerous occasions, and they more than earned their equaliser with twenty minutes remaining.

This jolt should have galvanised the home side, but it was the visitors who looked more likely to snatch the three points. Continuing to cause Liverpool problems, Alisson had to be vigilant, but time and time again Brighton won their individual battles, were first to the loose ball, and had a third goal ruled out for off-side.

Meanwhile, though Liverpool huffed and puffed, they never really looked like adding to their tally. Salah was peripheral for the most part, Bobby all too often lost possession, and neither Ox nor Curtis Jones posed much of a threat. Klopp made two late changes, bringing on Jota and Minamino, but in truth, it would have been very harsh on Brighton had they lost, and they would perhaps feel justified in feeling aggrieved that they didn’t take all three points back to the south coast.