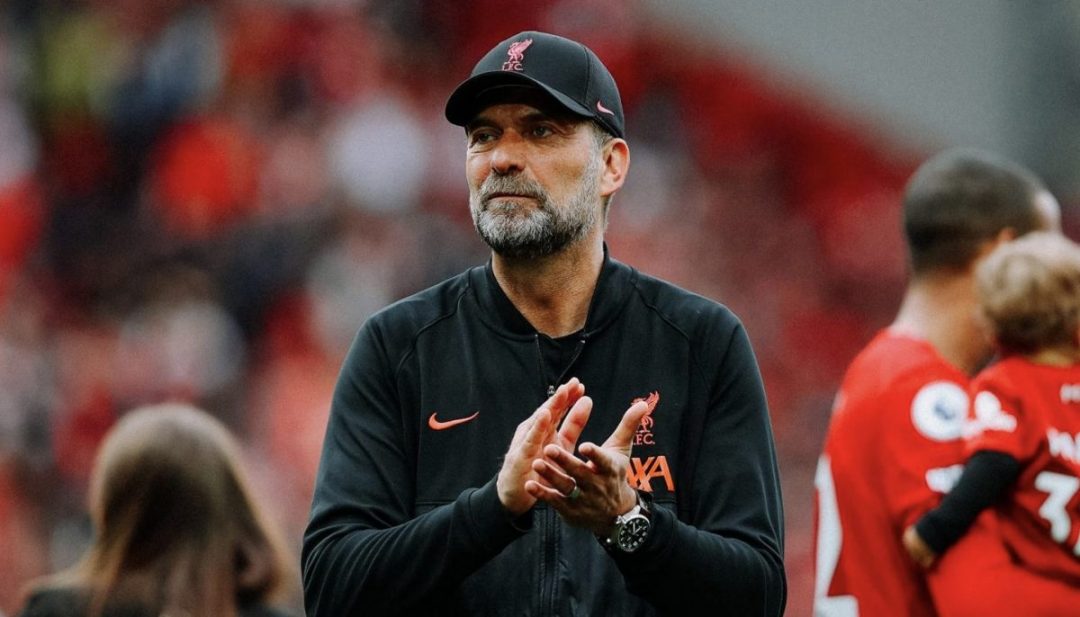 After falling behind inside five minutes, a 3-1 home victory against a resilient Wolves, was not quite enough to ensure a 20th title triumph for Liverpool. The quadruple is no more, though a treble, with this weekend’s Paris Champions League final still to come, is still all to play for.

Missing Virgil van Dijk once again, and with Mo Salah also sitting on the bench, Jurgen Klopp’s mentality monsters knew only victory would be enough to catch Manchester City, in this most enthralling of title races. However, Wolves showed no sign of simply fulfilling the fixture list, and with the previously imperious Konate misjudging a ball that sailed above his head, followed by a pinpoint pass to Neto at the back post, the visitors found themselves one up inside the opening minutes. The pace of the game was frenetic, and the midfield resembled pinball at times, with Keita, Henderson and Thiago finding it difficult to control the game. Wolves had come to play.

Having had several opportunities to equalise, Liverpool equalised through Sadio Mane just after twenty minutes. Put through on goal by a delightful piece of skill by Thiago, he slotted past the onrushing Wolves keeper. Suddenly a mood of nervousness inside Anfield was replaced with roaring encouragement, and a euphoric wave of ‘what if’ soon filtered through an expectant crowd, on hearing that Villa had taken the lead at City.

Forty-five minutes of an incredible emotional rollercoaster lay ahead. Though Liverpool needed another goal and would have to find it without the injured Thiago, replaced by stalwart James Milner at half-time, hope turned to expectancy with further news from the Etihad. Former twinkle-toed Brazilian playmaker Philippe Coutinho had somewhat surprisingly put Steven Gerrard’s team ahead, and the decibel levels at Anfield rose again.

Of course, despite the unexpected turn of events in Manchester, it was all academic if Liverpool couldn’t find a winner. Salah came on for the largely ineffective Jota, but a stubborn rearguard display from the visitors, along with the now customary time-wasting by visitors to Anfield, was continuing to frustrate the recent FA Cup winners. John Ruddy, the veteran goalkeeper, who’d been a half-time substitute, denied Trent, and as the final fifteen minutes approached, nerves were being frayed. It’s truly the hope that kills you.

With Liverpool camped in Wolves half, only sporadically threatened by a counter-attack, a quite extraordinary turn of events was taking place up the East Lancs Road. City, in a sign that some may describe as ‘doing what champions do’, and not only got themselves a goal on 75 minutes but within five minutes of their first, had somehow got themselves in front. The sense of hope and anticipation that only minutes earlier had been all-pervasive evaporated. It was as if a balloon had been violently popped. A goal from Salah, which ensured he shared the golden boot, and another from Robertson put Liverpool 3-1 up in the final minutes, the crowd were reduced to forlornly hoping for a Villa equaliser.

Of course, no such equaliser arrived at the Etihad. Wolves fans, obviously delighting in Villa’s demise, taunted the home crowd with ‘you nearly won the league’. Many in the Kop were left to ponder previous draws that ultimately proved decisive. Brighton, Brentford, and Chelsea, games in which Liverpool led.

Let us, however, not go down that road. It’s frankly absurd and disrespectful to a phenomenal squad of players, to criticise a league season in which Liverpool accumulated 92 points. Again, the side went a league season unbeaten at Anfield, 84 points were won in 28 league fixtures, we’ve been wowed and most enthrallingly entertained by ‘heavy metal’ football, and we’ve witnessed last-minute winners, not least from departing legend Origi. Season after season in the Premier League era, 92 points would have been more than enough to secure the league crown, but of course, these are extraordinary times. We are up against a sovereign wealth fund. A state-financed football team in Manchester City who, having spent £100m on just one player last summer, have now handed over twice that amount to ensure the signing of Haaland.

So let’s embrace and rejoice in a quite staggering season. A season that offers one more prize, and one in which we’ve already won two. As thousands of us head off to Paris, by whatever means necessary, most of us no doubt ticketless, due to the continuing greed and quite sickening disregard of fans Europe wide by UEFA, let’s head to Paris with hope in our hearts, and pride in these players. Pride In this team, and perhaps above all, pride in this quite remarkable manager. We have the chance to raise ‘big ears’ for the seventh time in our tenth European Cup Final, and don’t let anyone tell you that the blue half of Manchester wouldn’t swap with us in a heartbeat. We’ll just have to win the league next season.