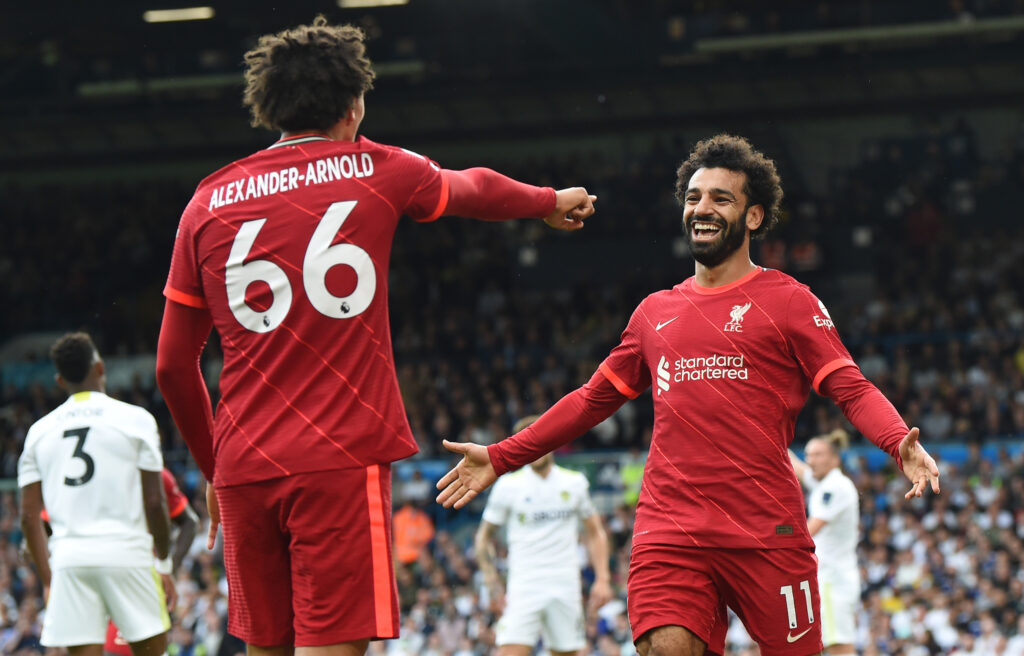 In a commanding performance, sadly overshadowed by an awful injury to the increasingly impressive Harvey Elliot, Leeds got away with only conceding three goals. It should have been twice that, with the profligate Sadio Mane missing a hat-trick of chances.

With the Elland Road crowd boisterously supporting their team, the early stages of the game more resembled basketball than football, with neither team getting control of midfield, and golden opportunities being spurned. Whilst Liverpool always looked the more likely scorers, it wasn’t until Joel Matip and Trent Alexander-Arnold combined to set up a tap in for the ever-reliable Mo Salah, that the stalemate was broken. More Liverpool goals should have followed, and the worrying inability of Mane, to find the back of the net from chances he really should have buried, saved Leeds from the proverbial basketball score, that Liverpool’s dominance deserved.

The second half proceeded as the first had ended, and it wasn’t too long before Fabinho doubled Liverpool’s advantage. Defending corners are a consistent weak point of Leeds United, with them conceding thirteen goals from such set-pieces last season. This time, Vigil van Dijk headed the ball into a melee of players, and the Brazilian midfielder, who by this time, was controlling the midfield with the excellent Thiago Alcantara, prodded it home with his second attempt.

At this point, the points were secure, and Jordan Henderson was clearly getting ready to make an appearance to help patrol the midfield, and stem any attempts Leeds would make in the final twenty minutes, to get back into the game. Tragically, the substitution didn’t come soon enough, with Elliot scissor tackled near the halfway line, and falling immediately to the ground in an agonised crumpled heap. It was instantly obvious that the injury was a serious one, as Mo Salah turned away in some distress, quickly followed by players and medical staff surrounding the prostrate teenager, who’d tormented the Leeds midfield for over an hour.

That incident changed not just the atmosphere in the ground, but slowed the pace of the game. Liverpool appeared to lose some concentration and intensity, whilst Leeds, now down to ten men, as the referee sent off Pascal Struijk, posed a more consistent threat to Liverpool’s goal, than in the previous hour. One particularly audacious long-range shot from Bamford, almost catching Ali off his line. It was the away team though that added to the scoreline, as Mane finally got the goal his performance deserved, as six minutes of injury time began.

For obvious reasons, this game will probably be best remembered for the injury to Elliot. However, it may also mark the day we finally saw the best of the magnificent Thiago, benefiting enormously from having Fabinho do his tackling for him, whilst he was left to set the tempo in midfield. The Spaniard constantly probed, found space, played forward, and caused the opposition no end of problems, as the catalyst for all of Liverpool’s best football.

With the Champions League next on the agenda, ten points from the opening twelve is an excellent return on the first four league fixtures. Yet, with the league table already having an ominous familiarity about it, with Klopp’s men being joined in the top four by both Manchester clubs, along with an obviously strengthened Chelsea, it will surely take many more victories to cement a formidable charge at the Premiership crown.