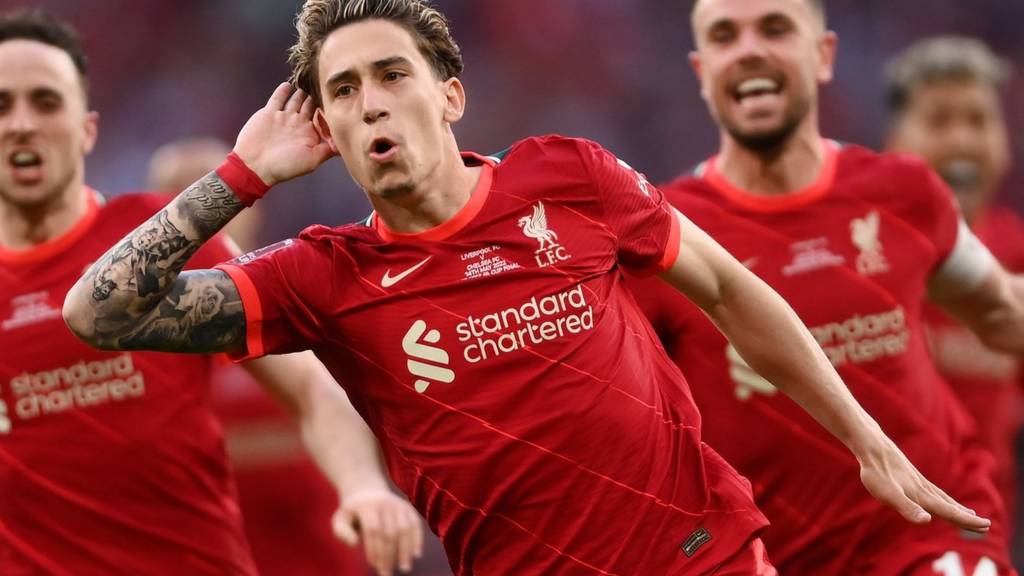 A near-replica of the League Cup Final, with Liverpool securing their first FA Cup for 16 years, means they remain on course for a historic quadruple. Yet again, Chelsea were defeated in a penalty shootout, with an outstanding save by Allison, followed by ‘Greek scouser’ Kostas Tsimikas calmly slotting home his spot-kick, being all that separated the teams after two hours of football.

With Jurgen Klopp selecting what is now surely his side’s most effective front three, in Salah, Mane, and the electrifying Diaz, it was Liverpool who made the better start to the 150th FA Cup Final. Luis Diaz in particular, a constant threat down the left, perhaps should have done better when one on one with Mendy inside 15 minutes, whilst Chelsea later went close, with Pulisic pulling his shot just wide, when unmarked in the penalty box.

Having had 61% possession in the first half, with Diogo Jota, replacing the injured Mo Salah, guilty of spurning a glorious opportunity just before half-time, Thomas Tuchal was probably the more relieved manager at the break. Chelsea though had also had their chances, with Allison being called upon more than once, particularly in blocking Alonso, despite suffering a knee injury in the collision.

However, whilst Liverpool started the brighter in an intense first half, it was the yellow shirts of the Londoners who came out of the traps the quicker as the second half began. Liverpool looked a little leggy, with perhaps the relentless fixture list of chasing four trophies may be beginning to have an effect. They did though continue to make chances for themselves. Diaz and Jota both came close before Keita was surprisingly replaced by Milner in the final twenty minutes.

Liverpool hit the woodwork twice as the near-certainty of extra time approached. First Diaz, yet again showing just what an invaluable addition he is to Liverpool, hit the outside of the post, before Andy Robertson struck the other post from close range, after a cross from Milner that Trent would have been proud to call his own. Chelsea were rocking, and though they had half-chances of their own, it was Liverpool looking the more likely winners.

With a Champions League final just weeks away, Van Dijk, suffering from muscle strain, being replaced by Matip as extra time began, was not a sight any Liverpool fan wanted to see. It may have also given Chelsea a boost, as they then spent much of the first period of extra time on top. Liverpool we’re finding it difficult to mount any sustained attacks, and as the tiring Diaz made way for Firminho, Klopp was probably glad of the half-time whistle, to regroup, and give an obviously exhausted team their final instructions.

The second period of the additional thirty minutes though was largely lifeless. Probably most notable for the cramped up Robertson being replaced by shootout hero Tsimikas, and both sides longingly looking at referee Craig Pawson for the final whistle. Liverpool and Chelsea, having played four hours of cup final football this season, rather incredibly with neither side managing to find a goal, once again faced the agony and ecstasy of a penalty shootout.

African Nations cup hero, Sadio Mane, had already had his penalty saved by fellow countrymen Mendy, when having the chance to win the Cup for Liverpool, and it looked for all the world that we were about to witness another marathon shoot-out. Yet, with both sides having taken six penalties, up stepped Mason Mount. Having already lost five Wembley finals, surely he could not be on the losing side again. Alisson though had other ideas, pulling off a wonderful save to his left, presenting Liverpool with another chance to claim their first Wembley FA Cup Final victory for thirty years.

I’m sure I was not alone in wondering just who was next for Liverpool, and as Tsimikas walked forward, memories of the last Liverpool left-back striding forward to take a decisive spot-kick came flooding back. That of course was Alan Kennedy in Paris, the next cup final venue for this remarkably resilient team. Would we see a repeat?

Indeed we did. Just as Barney Rubble calmly struck his penalty to the goalkeeper’s right, so did our Greek scouser. Mendy was beaten, and as Chelsea became the first side to lose three consecutive FA Cup Finals, Klopp became the only manager in our history to win both domestic cups, a league championship, and a European Cup, and keep the dream of a quadruple alive.

Where do you want your statue Jurgen Klopp?