Don’t let them ‘divide and rule’ us 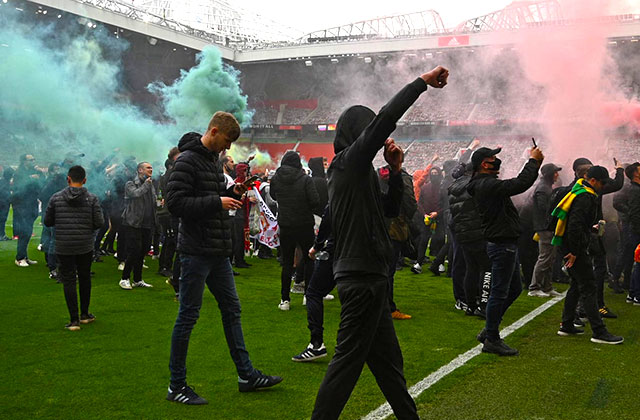 As Sky presenters attempted to steer the conversation around the United v Liverpool postponement, towards fan violence, my heart sank. Yet again, here was the media deliberately conflating ‘protest’, with ‘criminality’. An attempt to tar us all with the brush of ‘hooligan behaviour’, and then, thankfully, Jamie Carragher stepped in.

He rightly reminded ‘Sky’ that, whilst yes, there’s always a minority amongst any group who indulge their worst instincts, let’s not construct a narrative of ‘all football fans are thugs and hooligans’. Let’s not allow those who want to conserve the greed initiated by the advent of the Premier League, by compounding that greed, with the creation of the ESL, to hide away from the necessary ongoing debate about the future of English football.

What’s more, for some Liverpool fans, and perhaps worst, those who purport to speak on behalf of Liverpool fans, by use of a social media handle that uses the language and or insignia of our club, to use the events at Old Trafford, to denigrate all United fans, is a betrayal of our fans, as much as theirs.

This is not a time to indulge in petty ‘banter’, chiding one another with infantile trite remarks better suited to a school playground. They, we, United and Liverpool, the two biggest most significant football clubs in England, should be, and need to be, so much bigger than that.

This rapacious greed of owners who’d struggle to identify the Kop from the Stretford End, need to properly understand that many of us have had enough. The relentless commercialisation of every aspect of society, of which the aborted ESL, was merely an inevitable consequence of ‘the market’ being allowed to ride roughshod, over values that some of us feared were taking their last breath, must be halted, now. The values of co-operation, the greater good, assisting and supporting the most vulnerable, rather than denigrating and being contemptuous of them, must be revived and nurtured, not just in the world of football, but within a wider political context.
So United v Liverpool, a broadcaster’s delight, was postponed. Good. So those who simply see such fixtures as just another profit-making opportunity took a minor hit. Good. If the actions of those who protested, mean those such as the Glaziers and FSG, no longer think a pathetic, face-saving, mealy-mouthed apology, just doesn’t cut it, good.

So let’s, as fans of England’s two biggest clubs, in co-operation with Chelsea, Spurs, Arsenal & City supporters, act as one. Don’t let those whose real interests, despite their recent protestations, lay elsewhere, forget why so many of us immediately opposed the creation of another near-criminal cartel. Let’s stand firm. Let’s applaud those who won’t just let the matter drop, just because most mainstream media, has lost interest, and retreated to their cosy, self-protected, ‘conservative club’.

Oh, and by the way, most of you have a vote on Thursday. Rather than sitting at home, convincing yourself that you’re participating in some wider moral objection by not voting, as ‘they’re all the same’, how about doing just a little reading, and discovering for yourself, that they’re not?

Maybe start with looking at who previously wanted to change the structures of football club ownership and governance. Maybe look at those who’ve long since advocated similar changes, for all those wealthy owners of our energy, water, transport networks, and homes. But let’s not be divided by those who whenever threatened by the values of mass co-operation and some semblance of ‘fair play’, employ the tactics of divide and rule. That way lies defeat. That way would mean our opposition remains impotent. That way means we’ll all be here again, in the very near future.