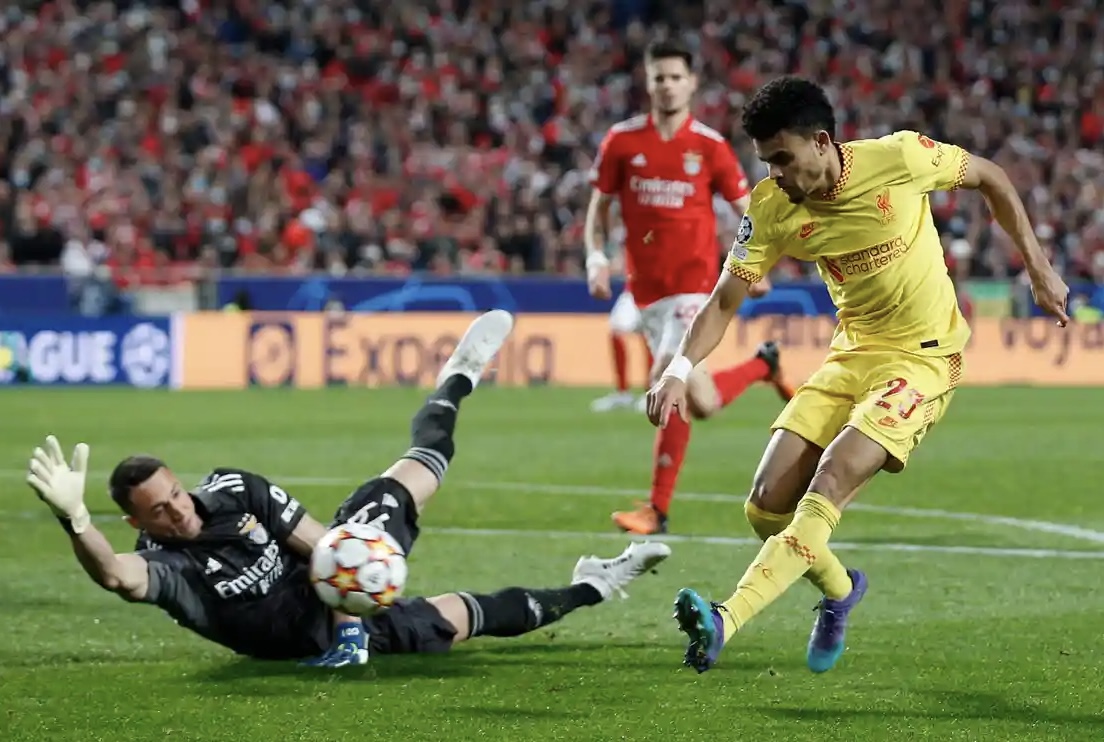 Luis Diaz probably secured a semi-final Champions League spot for Liverpool with a late goal, in a game that threatened to get away from Klopp’s men, after Konate and Mane had put their side two up in the first half. Konate, later at fault for Benfica’s early second-half strike, having headed Liverpool ahead, with Mane doubling the lead, as the Anfield men won 3-1.

In a team almost unrecognisable from that which defeated Watford on Saturday, with Trent, Konate, Diaz, Keita, Fabinho and Mane all starting this Champions League quarter-final in Portugal, Liverpool took a deserved lead inside 20 mins. After missing some early chances, Robertson’s corner was thumped home from the forehead of Konate, before a truly wonderful second from AFCON winner Sadio Mane. It was a goal that owed almost everything to the wand of a right foot possessed by the world’s best right-back.

Having received the ball from Konate just inside the Benfica half, Trent picked out a forward run from Diaz, who meeting it with his head approaching the penalty box, glanced it to Mane, who stroked it home. At this point, many more Liverpool goals looked probable, but with Mo looking not quite on his game, along with some wasteful and indecisive moments in the final third, Benfica trailed by just two as the second half kicked off.

There was no reason to believe that the second half wouldn’t mirror the first, but Liverpool, who not only dropped their intensity levels but began to give the ball away alarmingly often, soon paid for their profligacy. A poor header from Robertson on the halfway line lead to a counterattack down his left flank, and a ball across the box that should have been easily cut out by Konate, was missed, and Benfica were presented with an opportunity they were never likely to miss, and the stadium became alive with home fan jubilation, as the ball nestled into the net. Suddenly, Benfica and their vociferous home support had their tales up, and with Liverpool continuing to be sloppy, an equaliser certainly looked possible before Thiago, Mane and Mo were replaced.

With Henderson, Bobby and Jota on the pitch, the game became less frenetic, and though Liverpool’s speed of deed and thought didn’t really improve, a third goal surely closed the door on Benfica. A through ball from Keita was deflected by Otamendi, and Diaz, relentlessly barracked by Benfica fans all night for his past association with bitter rivals Porto, rounded the goalkeeper and slotted home with his left foot into an empty net. Job done.

Jota could well have taken the tie further beyond Benfica in the final minutes, but in the end, what looked like a potentially serious head injury to Fabinho being avoided, was far more important. Next up, Manchester City, and with all but a truly remarkable capitulation in the second leg, to threaten their place in the Champions League semi-finals, Klopp will no doubt pick his very strongest starting eleven, for what will be billed as a Premier League decider at the Emptihad on Sunday.