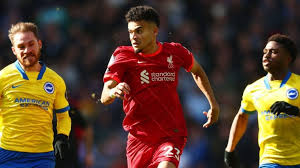 Luis Diaz, once again Liverpool’s man of the match, headed the visitors ahead beside the seaside, and somehow, Brighton’s goalkeeper escaped a red card. Mo Salah secured the points from the spot in the second half, but it was the reckless and dangerous attempt by the home side’s goalkeeper that remained the talking point.

Brighton started brightly in the early kick-off, without ever threatening to score, and it was with Liverpool’s first real foray into the Seagulls’ half when Diaz struck. A clipped ball from Joel Matip into the space between the Brighton defence and their goalkeeper allowed the Colombian time to make his run, and as he beat the onrushing goalkeeper to the ball, heading it goal bound, he was clattered to the ground. Just how both the referee, Mike Dean, and those in the VAR booth, concluded that a red card wasn’t appropriate is a mystery. Diaz was prostrate for some time, with replays clearly showing the goalkeeper made heavy contact with his forearm across the chest of Diaz.

With the impressive Colombian back to his feet, Liverpool proceeded to control the game. Brighton, neat and tidy in possession, failed to trouble the Liverpool defence and the second half kicked off with the visitors in front.

The Seagulls had made a change at half-time, but true to so much of his time when playing at Liverpool, Adam Lallana was soon replaced due to injury and watched from the sidelines as Mo Salah, who himself was later injured, doubled the visitors’ lead from the spot. Naby Keita, who along with Henderson and Fabinho, was controlling the midfield, Saw his shot illegally charged down, and referee Mike Dean, who’d earned the wrath of many of the home supporters for some of his decisions throughout a fractious opening period to the second half, rightly awarded the penalty.

Salah, who’d struck his spot kick-off with real venom, straight down the middle was, however, soon to leave the field. A foot injury seeing him replaced by Jota, whilst Henderson was replaced by Thiago. The game at this point looked to be meandering to a quiet and largely uneventful conclusion. Yet, before the points were safely on their way back to Merseyside, Alisson had to pull off a world-class save, tipping an effort athletically over the bar.

James Milner made his customary appearance in the final minutes, and despite five minutes of additional time, a comeback by the home side never looked remotely possible. Liverpool had comfortably endured a highly satisfactory visit to the south coast, and with Manchester City not playing until Monday evening, the gap at the top is down to three points for at least the next 48 hours.