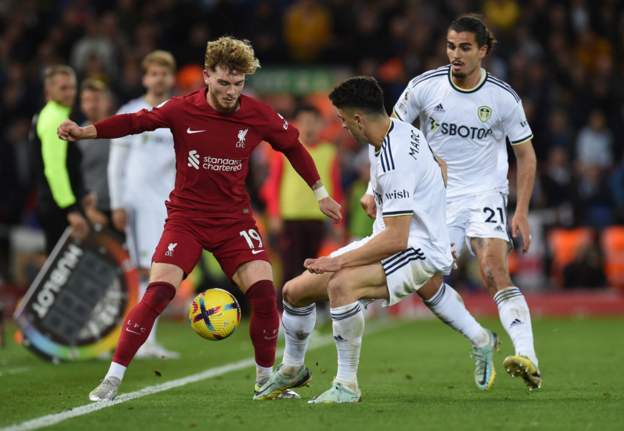 An early goal, conceded, again. Sloppy, hesitant, disjointed, again. More like basketball than football. Midfield substitutions that once more demonstrated a quite scandalous lack of summer investment. And of course, more points dropped, following a 2-1 defeat to Leeds at Anfield.

‘You need to break the lines’ said Klopp, and Thiago’s return to fitness, should have enabled Liverpool to do just that. However, in what is now becoming an all too familiar pattern, it’s the opposition who break through Liverpool’s ageing midfield, with ease. Resembling not so much a ‘line’, as a zig zag, the game passing Fabinho by, Leeds counter-attacked time after time, and had good chances to win, well before Summerville stole all the three points with just minutes remaining.

Yes, Melliet thwarted Nunez twice in the second half, and Salah made poor decisions when a goal looked likely, but it’s the same errors, the same game, that is repeatedly costing this Liverpool team. Not aggressive enough in defence, not sharp enough in attack, not quick enough in thought and deed. More worryingly, defeat so often looks probable, as Liverpool come up against sides with more intensity, more energy, and with players running further and harder.

Gomez set the pattern early on. A player so capable of top performances, witness his display against Manchester City, yet seemingly incapable of long-term consistency, simply didn’t look when passing back to a stranded Alison. Salah, wasteful in the second half, soon drew Liverpool level, but throughout a first half in which neither midfield gripped the game, the visitors looked dangerous on the break again and again. Yet somehow, it was level at the break.

If Klopp got in to his players at half-time, it didn’t show during the opening twenty minutes of a second period, during which time Leeds again looked the most likely. Fabinho, a shadow of his former self, and embarrassingly ghosted past by white shirts, that must have been a blur to him, was replaced by Henderson. It made little difference. Both are past their best, and whilst the jury is perhaps still out on Curtis Jones, who replaced Elliot, who had maybe his worst game in a red shirt, the lack of quality at Klopp’s disposal on the bench, was glaring.

So where there was once composure, there’s now hesitancy. Where there was once expectancy amongst fans, we now appear to hope. Hope is not enough, and I make no apology for repeating myself, but this team, this squad, looks done. The scars of last season perhaps run deeper than we appreciate. Certainly the lack of necessary investment is obvious, and bordering on negligent. An ageing team is being caught out, which may explain why collectively Leeds ran 11km further than Liverpool, and for that alone, they deserved the victory.

With two huge league games before the World Cup begins, two games when six points are surely essential to any hope that Liverpool have of a top four finish, Klopp and his team, maybe for the first time, are under real pressure. Getting those six points, away at Spurs, and home to Southampton, may also have a bearing on just who they can sign in January, with a top class central defensive midfielder surely essential. Yet, just who they can attract, and just how Klopp persuades FSG of the need to spend, remains to be seen.