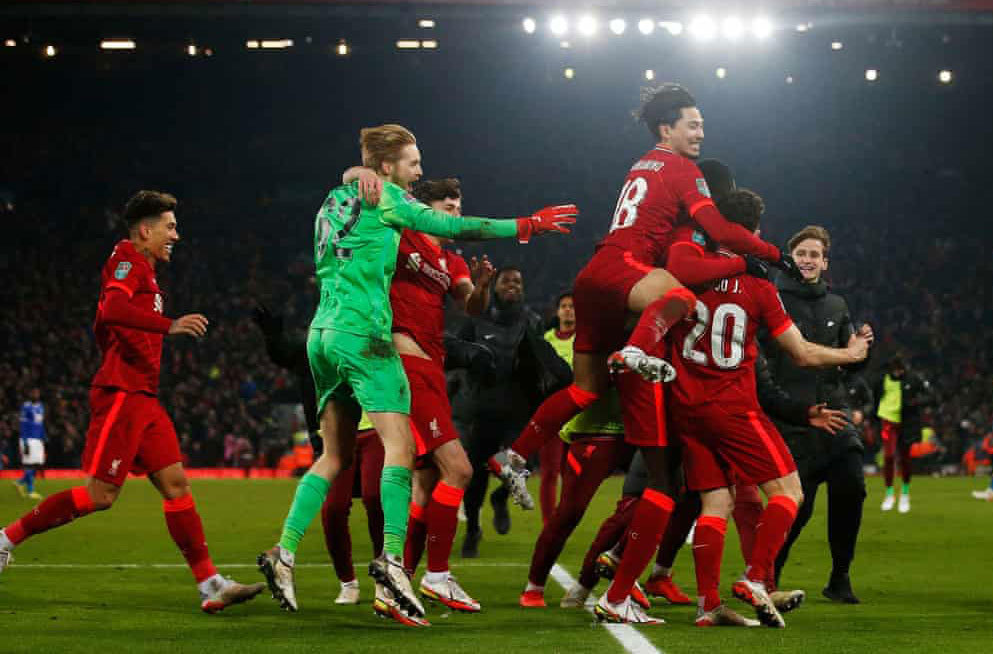 Santa Claus is real. All that he asks is that you believe. Keep hope alive in your heart long enough and you’ll be rewarded with a present to keep you warm through the long winter to come. As Jurgen Klopp so famously implored when he took the reins, any doubter must now firmly be a believer.

The match started out a bit of a mess. It was clear Liverpool were at a disadvantage when the team sheets came out. Leicester had named a strong side and the Reds were starting a lot of fresh faces, moppy haired lads right in the vein of the early Beatles. Passes seemed to be a bit nervy, the build-up play wasn’t connecting and Leicester were ready to pounce. For the second game running, Liverpool were unlucky to have to play a team that was chomping at the bit to get back on the pitch and it showed.

Giveaways and pace continue to be the Achilles heel for the defence when they don’t have the full first-team lineup in there and Vardy’s goals were both evidence of this. Ox helped keep the game in the balance after a lovely layoff from Bobby, but when that Maddison screamer went in, it was certainly looking bleak to say the least.

The energy in Anfield was defiant rather than defeated, however. There was a sense that this game still had plenty more to come and Klopp leaned right into this by introducing 3 subs at halftime to stabilize the game. Off went the kids, on came the vets and then it really was game on.

If there is one thing that must be said about Klopp’s legacy at Liverpool, beyond everything else, it’s that he has brought an undying sense of fight to the club that no team has matched since Ferguson was dominating with United. Even when the clock ticks away and the score is against them, Liverpool players and fans lick their lips. “Just give us one more look at goal. One more.” Be it the numerous Origi goals, the Dortmund comeback, the miracle against Barca, and so forth, this squad isn’t dead until it says so. Thus, once Jota had scored, there was a palpable sense that a 3rd wasn’t too far behind. That it was left so late is par for the course now. Like an action movie cliche where the bomb is ticking down right to the final instant, Liverpool thrill on the edge.

The swashbuckling nature of the early Klopp days has returned and while the defence is leakier than it has been in the last few years, the club now also has a champions pedigree built-in. An arrogance to stay calm and know that there is still much more left to come, no matter the scoreline.

Minamino continues to grow into his role, which bodes well should AFCON still happen. Ox likewise, thrills with his ball-carrying ability and Jota, well, Jota seems like such a steal of a transfer now. There have been growing rumbling that Haaland might be on the mind for next season and surely, he’d walk right into any 11, but the fact that Jota even makes that a moment of a debate speaks volumes. His cool resolve to slot home the deciding penalty is all you need to see about his quality.

The biggest presents of all must of course go to Kelleher today. Penalty shootouts are often more about the shooter holding their nerve than the goalie but he guessed right twice and set the foundation for the finish.
Improbably now, Liverpool hit the Christmas holiday in the semifinals of a competition they really seemed out of time after time today, and that’s certainly something to be merry about.