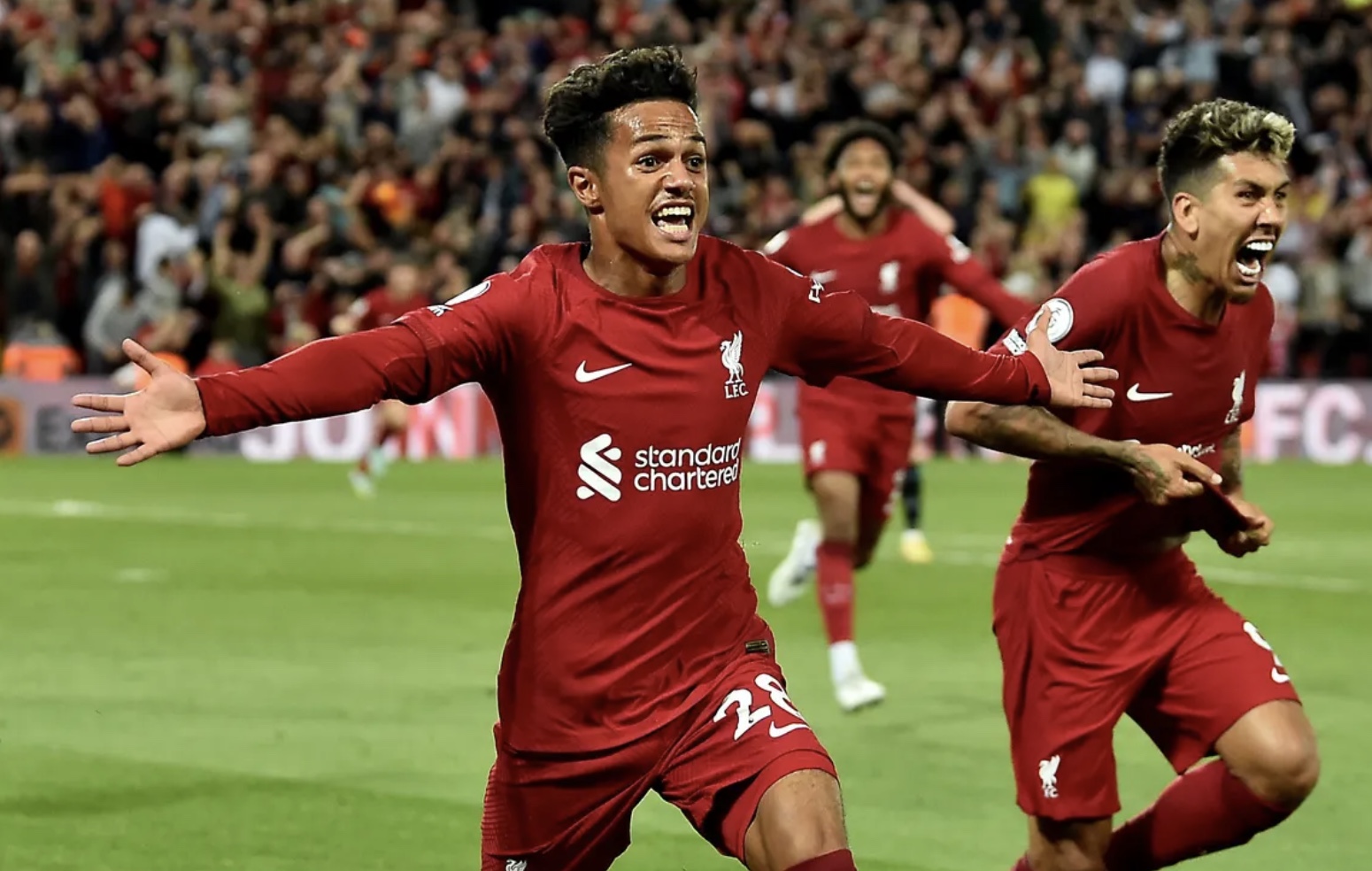 A thrilling last-gasp winner, by birthday boy, Fabio Carvalho, shouldn’t disguise the fact, that for much of this game, Liverpool lacked guile, lacked craft, and a stretched squad, lacks investment. Yes, three points were grasped with a glorious 97th-minute strike, high into the roof of the Anfield Road net, after Liverpool trailed yet again, but to expect the 20yr old match winner, and the impressive Harvey Elliot, to provide the spark so often missing from Liverpool’s play this season, is surely negligent by owners, who even Klopp alluded to pre-match, don’t always ‘take risks’ in the transfer market.

A robust and disciplined Newcastle United arrived at Anfield with £60m signing Alexander Isac up front, and it was he who deservedly put the visitors ahead in the 38th minute. A sloppy pass by Trent Alexander-Arnold led to an error by Fabinho, and the former Real Sociedad striker, slid in by a cute pass from Longstaff, on the edge of the box, fired hard and high to beat Allison.

In truth, Liverpool had created little prior to the visitors taking the lead. Other than Diaz blazing high and wide, after rounding Pope, who frustrated the home side for much of the night, their disjointed and hesitant football, seen so often since the season began, was on display once again. Too slow, too immobile in midfield, and insufficient ability to play on the half-turn, all contributed to the frustration amongst the home crowd. Only Elliot, demanding the ball, prepared to make mistakes, showed the spark and imagination necessary.

So once more, Liverpool trailed at half-time, and for the 8th time in 9 games, failed to keep a clean sheet. Further, but for a tight off-side decision against the debutant ‘toon’ striker, would’ve been two down, before Bobby, with his first goal against Newcastle, drew Liverpool level. Found by the otherwise well shackled Mo Salah, a side-footed strike by the Brazilian from inside the penalty box, upped the tempo inside Anfield, and for the first time in the game, Newcastle began to look rattled, unsure, and hurried.

Yet, those who expected a swift second by a Liverpool side, that suddenly looked quicker indeed, but let themselves down in executing the final pass, had to wait until the 97th minute for the winner. A winner that raised the roof, and led to a clearly frustrated Jurgen Klopp, celebrating at the end of the game, with his now customary fist pumps in front of the Kop.

With Newcastle defending for their lives and displaying a ruthless streak of the dark arts of time wasting, it looked as though a frankly ridiculous speculative volley from Joe Gomez from 20 yards, who saw his effort sail high into the night sky, would be the last action of the game. Referee Andre Mariner, who to this point had been poor in his officiating, had clearly been mindful of the Magpies time-wasting antics during the five minutes that had been added on, and as the game went into the seventh minute of injury time, Liverpool were awarded a corner.

As the ball ricocheted from head to head, in a tightly packed penalty box, Carvalho reacted quickest. Pope, surely pushing Pickford for the goal-keeping position for England, was the first time, hesitant between the posts. Rather than attempt to claim the loose ball, he was rooted to the spot, and Carvalho, stretching high, hammered the ball into the roof of the net. Newcastle players dropped to the ground, something they’d evidently been practising for much of the game, and a much-needed three points were claimed by a relieved Liverpool.

So, having claimed eight points from five league games, an early kick-off in Saturday’s Merseyside derby affords Liverpool the chance to move closer to the top of the table. Yet, how much longer must fans be content with a squad that needs obvious re-investment? The net spend of FSG on new players would suggest that we’re unlikely to see the chequebook flashed about any time soon, but a club of Liverpool’s magnitude, in the hands of our best manager in thirty years, surely deserve better.

Greater ambition in pursuing world-class talent must lead to Klopp having better options to change a game. I have absolutely no desire to denigrate the Herculean efforts of James Milner as he enters the twilight of his career, and as someone who was never slow to praise Jordan Henderson, I believe he has yet more to offer, but we’ve surely seen the best of them both.

The squad needs new blood. Loyalty is often misplaced in football, other than by fans, and if Liverpool are to continue to challenge for major honours, future transfer windows must see us at the head of the queue. To do anything other, would not only risk hastening the charge of negligence against the club’s owners, but would also risk potentially wasting the golden years of Klopp, Salah, Virgil, and Diaz. That would be unforgivable.