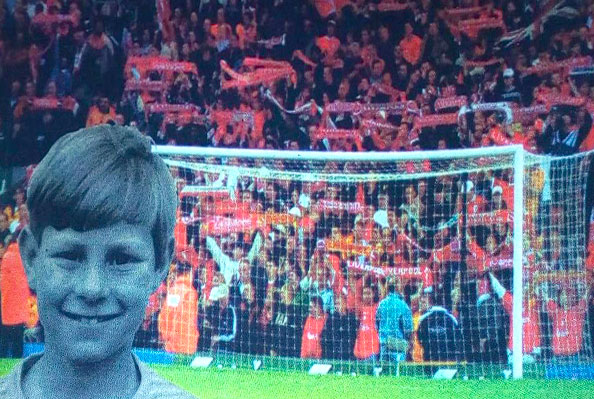 The following article is the preface to Peter Etherington’s book One Boy And His Kop.

“Yer late! Where’ve yer been?”
“Sorry Lily. The train got delayed comin’ back from Bolton.”
“Yer a lyin’ get John! Yer’ve been in the Toll Bar ‘avin’ a bevy with Jimmy Boyle ‘aven’ yer?”
“Just a couple Lil.”
“‘Ow’d they get on anyway?”
“We got beat two nil. Rubbish we were. I think we’ll go down this season.”
“Wasn’t worth goin’ then was it?”
“Course it was worth goin’. Don’t be stupid Lil.”
“Anyway, yer can get back on the ale now. I won’t be ‘avin the baby tonight. I’m in slow labour. They reckon I’ll ‘ave it tomorrow mornin’.”
“Slow? I don’t think the little sod wants to come out!”
“Yeah, it’s all right for you. You ‘aven’ been the one lyin’ ‘ere for two bloody days!”
“Well you were the one who said yer waters had broke.”
“I thought they ‘ad if yer know what I mean. Go on then. Get back to yer mates in the Toll Bar.”
“Okay Lil, if you insist.”
“Don’t be bloody funny. Just make sure yer ‘ere first thing tomorrow. If yer see Cissy Mulhall in there ask ‘er to lend us five bob ’til next week.”
“Sod that! I’m not going anywhere near that owld cow! I’ll ask Charlie Clarke. I’ll gerrit for nothin’ off ‘im. I’ll just wait ’til ‘e’s pissed then tap ‘im. ‘E never remembers a thing once ‘e’s ‘ad a few Mackies.”
“In that case then ask ‘im for ten bob.”
“Okay Lil. See ya.”

The following day:
Johnny Evo sat outside the delivery room and heard his newly born baby’s first cry at ten past seven in the evening, the new addition to the family keeping up the great Evo tradition of unpunctuality. He hoped for a boy. The real dilemma though was whether to call him Billy or Bob. If he went for Billy he’d feel tight on Bob Paisley. Similarly if he went for Bob he would be showing disloyalty to Billy Liddell. He came up with the solution; he’d call his son (because surely it was a boy, he and Lily already had a girl) William Robert, or should he call him Robert William? Toss a coin Evo! The coin came down In Liddell’s favour. William Robert Etherington it was to be then. A name that would surely strike fear into the hearts of defenders the length and breadth of the country in twenty years time. Yes, Billy Evo was going to be one of Liverpool’s greatest ever players!

John’s reverie was rudely interrupted by the crude bark of Nurse Hatchetface, Bootle’s hardest midwife.
“You’ve got a son Mr. Etherington! Come in and see to your wife.”
“John, John, it’s a boy!” Lily managed to cry through her exhaustion.
“Yeah, I can see that Lily. A very well built boy too I see. Just like ‘is owld fella! William Robert Etherington. Gorra great ring to it don’t yer think Lil?”
“Er…no! Why William Robert?”
“Yer know, after Liddell and Paisley.”
“Who?”
“Oh never mind.”
“No chance John. You ‘ad the choice with our Pauline. I’m ‘avin’ the choice with this little one.”
“Well what are we gonna call ‘im?”
“Peter.”
“But there’s nobody called Peter plays for Liverpool!”
“Does it matter?”
“Yeah!”
“Why?”
“Forget it. Peter it is then. ‘E’s gonna play for Liverpool though.”
“Not if ‘e takes after you! Remember when I came and watched yer playin’ for that Navy team? You were rubbish. Jimmy Greenlea said yer were the worst player ‘e’d ever seen.”
“Oh aye yeah! What does ‘e know about football? ‘E’s a bloody Evertonian! Anyway, who does ‘e think ‘e is – Stanley Matthews?”
“Who?”
“Yer really ‘aven’t gorra clue ‘ave yer Lily?”
“No.”
“Well even if ‘e doesn’t play for Liverpool ‘e’s definitely gonna be a Red. No mixes in our family Lil. We’re all Red through and through. No blues in the Evo’s! Me great-granddad stood on the Kop at our first ever match yer know.”
“Oh did ‘e? I’d be interested if I knew what the Kop was. Is it where all the Bobbies stand?” Lily’s barely stifled yawn revealed the extent of her exhaustion. She just wanted to be alone now with her new son and get some sleep.
“Okay Lil, I’m goin’ now.”
“Go straight ‘ome. Me Ma’ll get a cob on if she’s lookin’ after our Pauline too long. She’s goin’ to Harland’s tonight.”
“Okay Lily. Will do. Ta ra luv.”
Lily was asleep with little Peter in her arms before John got his last word out.

John thought about it for all of two seconds. Martha would be okay looking after Pauline. The Toll Bar was just a cock stride from the hospital. All his mates would be in there. He’d get some stick from the Evertonians, especially Jimmy Greenlea, after yesterday’s results. Everton had beaten Oldham 3-1 but they were only in the Second Division. Liverpool were in the First Division and were not only the best team on Merseyside but also in the world! Anyway, he’d have Jimmy Boyle to back him up. The Toll Bar it was then. Gorra wet the baby’s ‘ead ‘aven’ yer? Nice choice Evo!

“Yer goin’ down this season Evo!” Jimmy Greenlea’s “welcome” was all that John could have expected from his blue brother-in-law.
“No we’re not. We’re gonna win the League.”
“I’ll show me arse from the top of Bootle Town ‘All if yer do!”
“Yeah, who’d wanna look at your big fat arse?”
“We’re gonna come up too Evo. It’ll be nice passin’ yer!”
John couldn’t see Everton getting promotion but in his heart of hearts he knew it was a distinct possibility that his beloved Reds would go down. They stared the relegation trap door firmly in the face last season, eventually escaping by finishing just four places above the drop slot.
“We’re gonna win the Cup too!”
“Piss off Johnny. The friggin’ Liver Birds’ll fly away from the Liver Buildings if youse ever win the Cup!”
John had no answer to this, as after sixty-one years of trying Liverpool had failed to lift the FA Cup. Arsenal had broken John’s heart at Wembley three years earlier and it still hurt.
“Come on Johnny. Take no notice of the Evertonian shitehawk,” Jimmy Boyle interjected, “Ee arr, ‘ave a bevy to wet the baby’s ‘ead. What’re yer ‘avin’?”
“Rum and black Jimmy. Friggin’ Twinkletoes gets on me nerves!”
It was a cause of great consternation to John that his sister Eileen had married an Evertonian. Jimmy Greenlea was not his favourite person for that fact alone! On the other hand it filled him with deep joy that another sister, Rosie, had married Jimmy Boyle, a staunch Red.

Ten rum and blacks and half-a-dozen bottles of Manns Brown later and John was well and truly bladdered! Derby Road resounded to John’s considerably loud voice celebrating the birth of another Red. The fact this little one was also his son was a bonus.
“Look Jimmy look! My Lily’s in there,” shouted John pointing at the massive building that was Bootle Hospital.
“I know John, I know. Come on mate, let’s get yer ‘ome. Martha’s gonna friggin’ kill yer.”
“Ah, I’m not arsed Jimmy. I love Lily yer know Jimmy. I do yer know, I love ‘er. I love the friggin’ bones of ‘er. I just wish they were buried underground. Ha ha ha! Nah, I’m only messin’. I do, I love ‘er. I love you too Jimmy. Yer my favourite brother-in-law yer know an’ I friggin’ love yer! What the bloody ‘ell was our Eileen doin’ marryin’ a friggin’ Evertonian? I mean Jimmy’s all right an’ all that but he’s a friggin’ Evertonian for Christ’s sake!”
“Yeah, come on John, ‘urry up will yer lad. I wanna get ‘ome before the milk.”
“Why, d’yer think the milkman’s knockin’ a slice off our Rosie? Eh, d’yer think she’s getting a bit more than the cream? Ha ha ha!”
“Come on Johnny will yer. Yer a friggin’ nuisance when yer drunk!”
“Look Jimmy, look. My little Peter’s in there as well! Me lovely little son. Another Red in the family Jimmy.”
“‘Ow come yer called ‘im Peter? There’s nobody called Peter plays for us.”
“I know Jimmy. That’s what I told my Lily but she wasn’t ‘avin’ any of it. I chose Pauline’s name so lovely Lily wanted to pick this one. I mean, I love ‘er an’ all that Jimmy but she’s friggin’ thick yer know! She doesn’t even know who Stanley Matthews is! If she ‘ad a friggin’ brain she’d still be a ‘alf wit!”
“Yeah, I know John. Rosie’s the same. If brains were dynamite she wouldn’t ‘ave enough to blow her friggin’ ‘at off!”
“Ha ha ha! You’re funny you Jimmy. I love you. Come on Jimmy let’s ‘ave a song.”
John and Jimmy stood arm in arm as their raucous tones echoed off Bootle Hospital’s walls and reverberated all round Derby Road.
“After the ball was centred, after the whistle blew
Liddell got excited and up the wing he flew.
He crossed the ball to Stubbins. Stubbins scored a goal
And left the poor old goalie lyin’ on ‘is ‘ole.
They laid ‘im on a stretcher. They laid ‘im on a bed.
They rubbed ‘is belly with cast-iron jelly and this is what they said.
Liverpool’s at the top of the League, ‘oldin’ up the Cup.
Everton’s at the bottom shoutin’, “Leg us up!”

“Ah, great that Jimmy. I love singin’ with you!”
“Yeah, well Perry Como and Donald Peers ‘ave got nothin’ to worry about with us two ‘ave they?”
“Ah bollocks to them Jimmy. I’ve got a son. ‘E’s a Red. Once a Red, always a Red!”