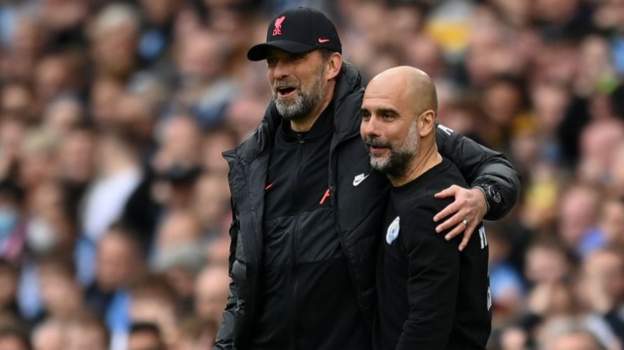 In a pulsating Premier League showdown, in which neither side gave an inch, it will surely be Liverpool more happy with a point from a 2-2 draw. Just as at Anfield, twice the home team took the lead, only to be pegged back. Jota restored parity, after a deflected De Bruyne strike, and Sadio Mane equalising in the opening seconds of the second half when Jesus had put his team in front mid-way through the first half.

With Liverpool affording the home side far too much time and space, it took just five minutes before the ball nestled into the corner of the net. Just as at Anfield, a strike from De Bruyne taking a deflection of Joel Matip, eluded Alisson’s fingertips, before striking the inside of the post, and crossing the line. Liverpool though didn’t wait long to strike back. In just about the only first-half move worthy of the name by the visitors in the first half, a sweeping move down City’s left flank was stroked home by the prodigious Portuguese striker.

After the early flurry of goals, City took control of a game in which Liverpool looked nervous. Even the dependable Virgil van Dijk looked rattled, and his teammates were not making his job any easier, as they gave the ball away repeatedly, and half-time couldn’t come soon enough, especially after Jesus, in acres of space from a clipped free-kick, restored the home teams advantage.

Whatever Jurgen Klopp said to his charges during the interval clearly had the desired effect. Mane, particularly guilty of losing possession in the opening forty-five minutes, drew Liverpool level within seconds of the re-start. A superb through ball from Salah, was rasped home by the Senegalese, leaving Edison grasping at thin air. City were rattled, and Liverpool went on to enjoy their best spell of the game, without ever creating a clear cut opportunity.

Changes were required if they were to go on to win, and soon Diaz replaced Jota, whilst Henderson made way for Keita. Klopp obviously decided against replacing Thiago, despite the Spaniard being on a deserved yellow card. Fabinho might have also been replaced, having had a difficult afternoon in midfield stemming City’s attacking play.

As the final ten minutes approached, Klopp made one further change, as Mane made way. Both teams were still going for the win, but it was City who had the final opportunity, attempting an audacious chip over an approaching Alisson in the final seconds, having previously struck the outside of the post from a free-kick.

So, it’s as you were, as a Gallagher brother might have put it. City’s advantage remains just one point, and with just seven games left to play, the quadruple remains achievable for Liverpool, whilst City, probably the better side here at the Etihad, will know any dropped points will open the door for Liverpool to secure a second Premier League crown.