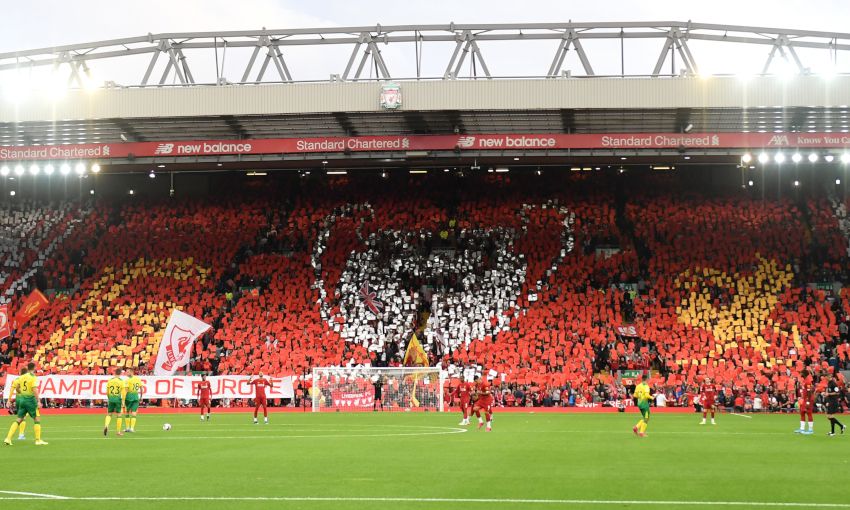 Welcome to Anfield Journal – my weekly diary following Liverpool Football Club home and away throughout the Premier League season.

After a brief summer break, we returned to action with a comfortable win over newly-promoted Norwich City in the season opener on Friday night. It was a party atmosphere in Anfield, with a ‘Six European Cups’ mosaic to hold up before kick-off and ‘We are the Champions, Champions of Europe’ to belt out during the game.

The early kick-off gave the Kop the opportunity to sing ‘Liverpool, Liverpool top of the League!’ within seconds of the opening goal going in on 7 minutes – a defensive error forced by fan favourite Divock Origi culminating in an own goal. Let’s hope we stay at the top of that table for the next nine months!

It wasn’t long before Mo Salah turned on the magic and doubled the lead. Virgil van Dijk added a third and Origi was once again on fire, making it four before half-time….

Alisson’s calf injury towards the end of the first half of the game was the only dampener on the night. He limped off cautiously and, to several shouts of ‘Adran!’ from the Kop, Liverpool’s new second-choice keeper took to the field.

We were expecting more of the same in the second half, but it was a more relaxed 45 minutes, with less chances for the Reds. Unfortunately for Adrian, Teemu Pukki netted just after the hour mark to deny him a clean sheet on his deput

Next up we travel to Istanbul to face Chelsea in the Super Cup. It’s great to be back!