HomeNewsRobertson admits Reds are not in title race after Brighton defeat

Robertson admits Reds are not in title race after Brighton defeat 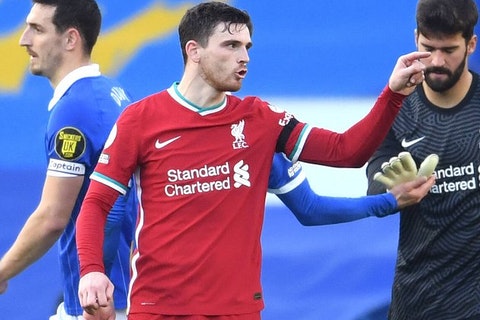 Liverpool were beaten 1-0 by Brighton on Wednesday night only days after Burnley had ended their near four-year unbeaten league streak at Anfield, leaving the Reds seven points off leaders Man City, who have played a game less.

“Any game against Man City is a big one,” said Andy Robertson after the defeat. “As this moment stands, we’re not in the title race. We are seven points behind them and they have a game in hand.

“You have to give [Brighton] credit for playing well. They created chances, pressed us, did everything we wanted to do.

“We didn’t really do anything of note. With a long record of going unbeaten, we’ve lost two. When you don’t show up you don’t get results.

“We’re still a good team. We don’t turn into a bad team overnight.”