Liverpool cruised into the knockout phase of the Champions League with a comfortable 2-0 victory over Atletico Madrid at Anfield on Wednesday night.

Diogo Jota got the Reds off to an early lead and Sadio Mane added a second as the Reds ran rampant against the ill-disciplined visitors. A red card for Felipe before half-time allowed Jurgen Klopp’s men to take the foot off the gas, but Roberto Firmino picked up a hamstring injury in the second half. 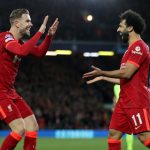