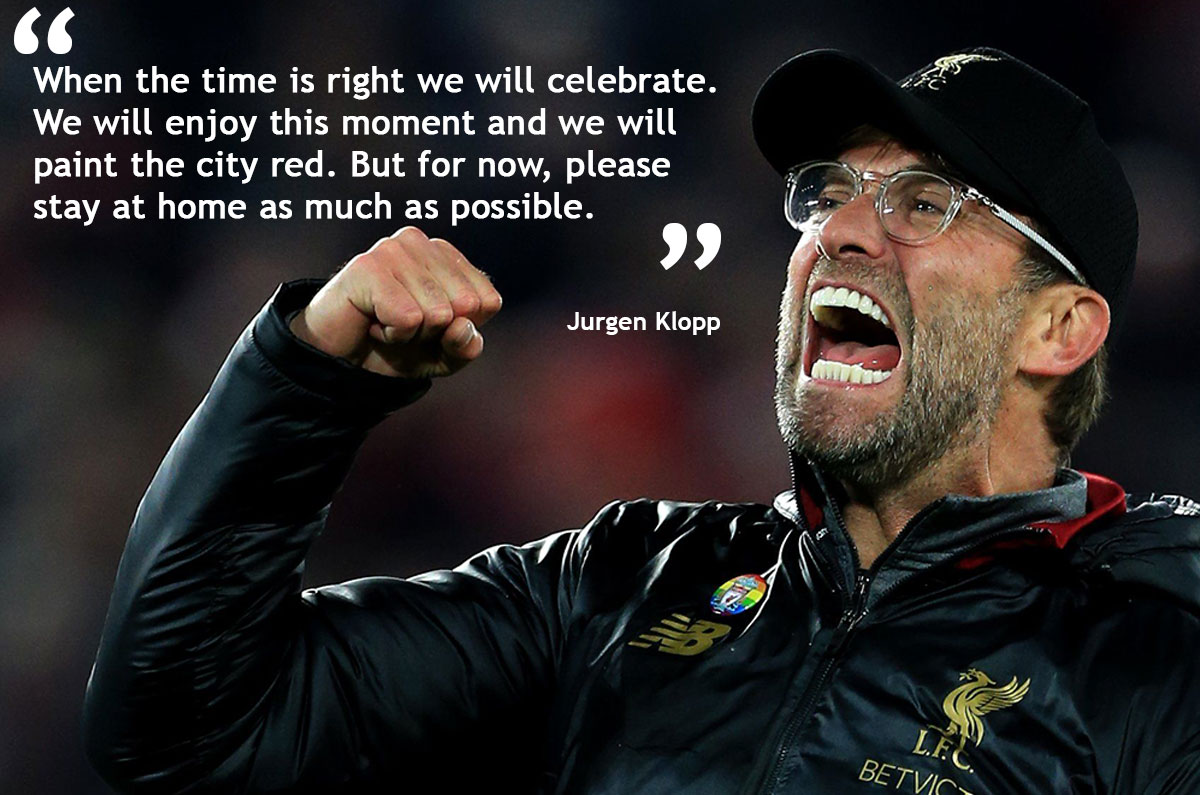 Liverpool manager Jurgen Klopp has written a letter to Liverpool fans, via the Liverpool Echo, in which he shares his joy at winning the Premier League title, but also urges caution to those who have been celebrating overzealously in public over the last few days…

Firstly, if you are reading this newspaper it is because you care about the city of Liverpool and want to know more about it so in this sense we already have something in common.

I have never before written a letter to a newspaper. I do a lot of press conferences and I know that I am mentioned in the media more than is normal but this is the first time that I have felt the need to write a letter and the reason for this is that I want to speak directly to the people of Liverpool.

This is an incredible time for incredible supporters of an incredible club in an incredible city. For some of you, it is the end of a long wait for Liverpool to be champions, but whether you have been waiting for 30 years or 30 minutes I hope that you are enjoying this moment every bit as much as you deserve to.

I have the great privilege of being manager of Liverpool Football Club. It is a privilege that I carry with me every single day because I know that I am working for you. I knew that Liverpool was a special place before I came here almost five years ago but it is only when you get to know the people that you feel the city’s heartbeat and then you are able to realise just how special it is.

This does not only apply to Liverpool fans either. I am obviously biased because Liverpool is my club but I am not so biased that I cannot see that Everton fans are the other side of the same coin and that the rivalry that exists is so important to the city’s identity.

I know that this is not their favourite time and if roles were reversed it would not be our favourite time either but in Carlo Ancelotti, Everton have a great manager and a great person and I have no doubt in my mind that their improvement since he arrived will only continue. Everton is a great rival in every sense. I do not need anyone to remind me of this.

For us to finish above Everton and the 18 other Premier League clubs is an unbelievable achievement. I respect all of them because between us we combine to make English football so competitive and so compelling that people all around the world are captivated by it.

The mistake would be to focus only on how many points we lead by because I can’t think of too many games in which we were not forced to fight for every single inch. In some, we had to dig deep into our souls to find a way to win. On so many occasions I walked into the dressing room afterwards, amazed and so happy with what I had just seen, only to find the boys out on their feet because they had given so much on the pitch. This is a hard league and it has been won the hard way no matter what the table says.

For this to happen we have needed so many ingredients to come together. The actions and achievements of the players speak for themselves. All of the tributes that they have received are so deserved and as their manager I could not be more proud. But for all the focus on their ability and their commitment, one thing that has been overlooked is that as a group they understand exactly what it means to represent this city and carry its name.

This is the petrol in their tank that is always there and it has fuelled us every step of the way.

As well as the current players, I would like to pay special tribute to two of our former players who set many of the standards that all of us have to follow. Sir Kenny Dalglish is the soul of this club. His understanding of what Liverpool is and what it means to the people is vital to everything that we do. I saw how happy he was after we were confirmed as champions on Thursday and his smile meant so much to me that I can’t put it into words.

Steven Gerrard is the legs. He carried the club in so many ways as a player and there is no one who deserves this title more than he does. Along with Kenny, Steven is a symbol of this club and it is important that at a moment like this that we remember everything that all of our former players and former managers did to help put us in the position that we are in today.

These are the people who built Liverpool. The same goes for our owners and I cannot speak highly enough of them or what they have done. In modern football you have to have a vision, a strategy and an unshakeable commitment to the cause to stand any chance of being successful. On all three fronts, Fenway Sports Group have shown to me that they are leaders in the field. My appreciation for them is absolute.

So we have brilliant players, incredible former players, outstanding owners and on top of that we have the best supporters that any club could ever wish for and their part in building the club, inspiring it and pushing it to be the best that it can be is so important that without it none of what we have achieved would be possible.

I love your passion, your songs, your refusal to accept defeat, your commitment, your understanding of the game and your faith in what we are doing. Even though you cannot be at our games at the moment I love that you still made sure that you were with us by making the Kop look like the Kop even if it cannot sound like it. I cannot begin to tell you how much the players and myself appreciated that and I have no doubt that it was one of the reasons why our performance against Crystal Palace was so good.

What I did not love – and I have to say this – was the scenes that took place at the Pier Head on Friday. I am a human being and your passion is also my passion but right now the most important thing is that we do not have these kind of public gatherings. We owe it to the most vulnerable in our community, to the health workers who have given so much and whom we have applauded and to the police and local authorities who help us as a club not to do this. Please – celebrate – but celebrate in a safe way and in private settings, whereby we do not risk spreading this awful disease further in our community.

If things were different I would love nothing more than to celebrate together, to have a parade that would be even bigger than the one after we won the Champions League last year, so that we could all share this special moment but it just is not possible. We have all done so much to fight COVID-19 and this effort cannot go to waste. We owe it to ourselves and each other to do what is right and at this moment that means being together and being there for one another by being apart.

When the time is right we will celebrate. We will enjoy this moment and we will paint the city red. But for now, please stay at home as much as possible. This is not the time to be in the city centre in big numbers or to go near football grounds. At the start of this crisis I said that we did not want to play in an empty stadium but if it meant that it helped just one person stay healthy we would do it no questions asked and nothing has changed to make me alter this view.

I already knew and liked the German word solidarität before I came to Liverpool and now I have learned that the English word is solidarity because I have heard it used by our supporters during the last few months. For me, it is the word more than any other that captures what Liverpool people are about. It is why they have come together to make PPE, it is why they have delivered food parcels and medicines to people when they have needed it most and it is why they come together in so many different ways during such a difficult time.

If we can keep on coming together by being separate we will hopefully play a big part in the fight against this disease. I know that we can do this because I have experienced what a difference can be made and the players and myself have benefited from it. Hopefully in a few months from now, or longer if necessary, I can write another letter to the Liverpool Echo to thank you for putting the health of our people ahead of everything else.

Nothing would make me prouder.

For now, I would like to thank the supporters of Liverpool and the people of this city who have helped to make us champions. This is our moment. It is a special time in all of our lives and you are the ones who have made it possible. Each one of you is a champion in your own right and we cannot wait until we get the chance to celebrate what you have achieved.