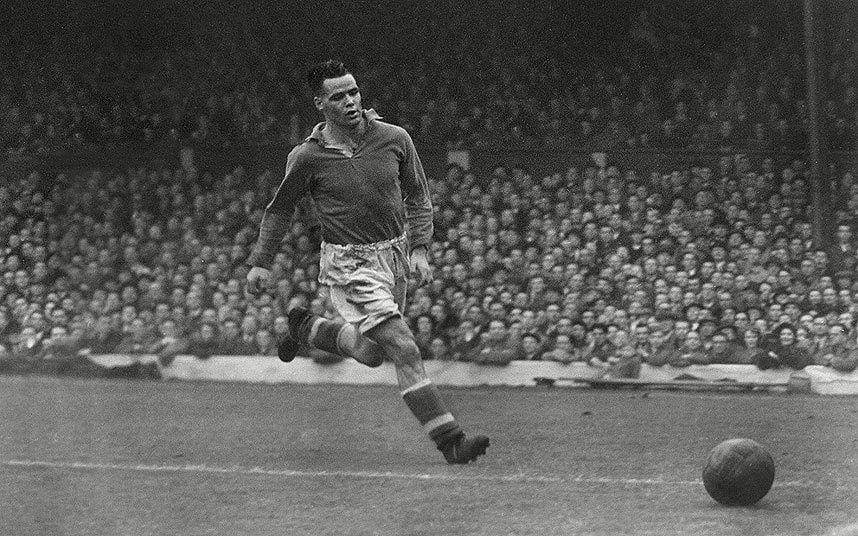 Imagine if Billy Liddell had been born in the 1970’s and had been blessed with half the footballing talent that those that saw him play knew he had. He’d be in his twenties now and probably a millionaire a few times over. Liverpool and Scotland would be boasting a world class footballer. The Kop would drool over his every touch. His popularity would not only rival that of Robbie Fowler and Michael Owen, it would dwarf it. The club shop would do a roaring trade in the replica shirt emblazoned ‘LIDDELL 7.’ The media would no doubt be full of speculation of possible £25 swoops from the likes of Juve, Inter, Real or Barca. But there would be no chance of Gerard Houllier parting with the jewel in the Anfield crown. Imagine as well a Liverpool attack boasting Liddell, Fowler and Owen! It would be the scourge of the Premiership and the giants of Europe would bend at the knee in their presence. Billy Liddell would have probably hated it all as well. He was above all the stuff of the great pretenders. Yes, there was only one Billy Liddell.

Billy Liddell came from a different era. Despite his God given talent he would never earn more than the majority of his teammates of the forties and fifties. His career came to a close with players earning around twenty quid a week, plus a few extra pound notes if they won. Fair enough, back in the fifties that sort of money would have meant a reasonable standard of living, but it was hardly the sort of money that would allow a footballer to retire once he turned thirty!
Today we fans often get criticised for daring to criticise the multi millionaires that are supposed to be entertaining us. Following last seasons treble the Kopites were a happy bunch and so, no doubt, were all the players as their bank balances increased by a few more noughts. Yet even last season we had players doing more or less nothing to earn their money whilst throughout the nightmare nineties we had players earning a mere ten grand a week complaining that they were underpaid! In Billy’s day fans would vent their feelings, probably far more strongly than they do today, if they thought that someone wasn’t pulling their weight but even during the worst of times nobody could ever level that charge against Billy Liddell. No manager ever had to tell Billy Liddell to go out and do his best because Billy Liddell never gave anything less than his best.

I argue with friends and colleagues about the pampered and over protected players of today. I am more of a cynic now than I ever was. People try and tell me how different the game is now and I have to agree that it has changed. But Billy Liddell never had the benefit of being part of a thirty-man squad. The manager couldn’t rotate the team then and anyway if any of them had been brave enough to drop Billy Liddell the walls of the Kop would have come tumbling down. The game in the fifties might have been different but the likes of Billy Liddell would face uncompromising defenders week in week out and those defenders would have one thing on their mind and that would be to kick Billy Liddell as hard and as often as they could. If players think that facing the likes of some of today’s hard men is a chore they should think themselves lucky because in Billy’s day they would come up against some real hard nuts, the sort that would have made Tommy Smith think twice! Billy would be out there facing the likes of Stan Milburn, Frank Mountford, Eddie Clamp, Maurice Setters and a few others and if you haven’t heard of them, ask yer Granddad. Yet despite knowing that a kicking awaited him, you’d never question the desire or commitment of Billy Liddell.

In the fifties Billy Liddell was in an elite group of players. A group that included the likes of Stan Matthews, Tom Finney and the late great Duncan Edwards. These were the players that everyone wanted to see play. Although Liverpool spent a good part of that decade in the second division the fans of our rivals loved it when Liverpool were due to pay a call. So did their clubs Chairman and Treasurer because they knew that if Billy Liddell was in the Liverpool line-up then a few extra thousand would be added to the gate! Dad’s would take misty-eyed sons to games and those lads would soon tell their schoolmates, “I’ve seen Billy Liddell” play. The reason being was that fans of teams like Bristol Rovers, Doncaster Rovers, Grimsby or Leyton Orient didn’t get too many opportunities of seeing a genuine world class player gracing their grounds. In fact to be honest in the fifties world class players weren’t in great abundance anywhere on these shores, but Liverpool had one.

Given the history of the club for much of the second half of the twentieth century it is hard to understand that for so much of an era one man carried the hopes of the fans. You see as the club slid from the level of Championship contenders and Cup Finalists to having what many fans believe was our worst ever team there was only one ray of hope and that was Billy Liddell. Once the rot had set in the decline was swift and as the press reports of the time would tell you only Billy Liddell kept the team afloat. Yes, there was a time when one man did make a team and when one man was bigger than the club. When the inevitable relegation came there wasn’t any transfer demand from Billy Liddell; there was just a determination to restore pride and status to a fallen club. On the other hand the club would never have dared sell him anyway because it would have led to a rebellion in the Red parts of the city and that is fact! Yet thinking back had Liverpool been brave enough and daft enough to have done just that the money even back then that a transfer would have commanded would have been enough to have brought in at least three or four new players. However, such was the status and standing of Billy Liddell the idea would never have been even considered.

My first introduction to the name of Billy Liddell came through my Bootle born mother. I’m sure she knew him personally, then again everyone else that followed the Reds back then would have told you that they knew Billy personally. She would tell me of this footballer, and how the team became known as ‘LIDDELLPOOL.’ She would tell me how he was worshipped by the Liverpudlians and about how he was revered on Merseyside and not just by Reds! Even the Blues of the time loved Billy Liddell, just as the Reds of the thirties had loved Evertons Dixie. She would talk of his genius and of how he won games on his own and of what he meant to the Anfield flock.

“Is he better than Stan [Matthews] then” was the question I asked
“Of course” she said, “He’s better than everyone!”

I can also remember back in 1959 being allowed to stay up past normal bedtime. Normal bedtime was when dad said it was and it rarely exceeded 9pm. The exceptions to the rule was if there was some football or boxing on the telly [very rare!] Or on a Wednesday when Sportsview [the only sports programme we had] was on. Even now I can remember being told and the emphasis is on TOLD] that I would be staying up one night because “Billy Liddell is on TV!”

It was September and ‘King Billy’ was being presented on Sportsview with a cheque for £2,000 to mark his twenty years with the club! It was a measure of his standing in the game that the BBC deemed it a worthy enough event to show on what was then Prime Time TV! Other players received awards like this, but they didn’t televise them. They broke new ground that night did the beeb, and it was all for Billy Liddell. And don’t forget Billy wasn’t playing for one of the nations top sides at the time, he was playing for a second division team called Liverpool!

The only time I ever saw Billy Liddell at Anfield was when he strode onto the pitch at the ‘Kops Last Stand.’ I wish I could have seen him play. I wonder what he and the team would have achieved had he played for Shankly? More than anything now I hope that Liverpool Football Club honours his name and that we Kopites do likewise. We watch football now in an age where the also rans of the game get paid a Kings ransom. None of them will ever be able to hold a candle to the man they called ‘King Billy.’ God Bless him.