The History of Liverpool Football Club 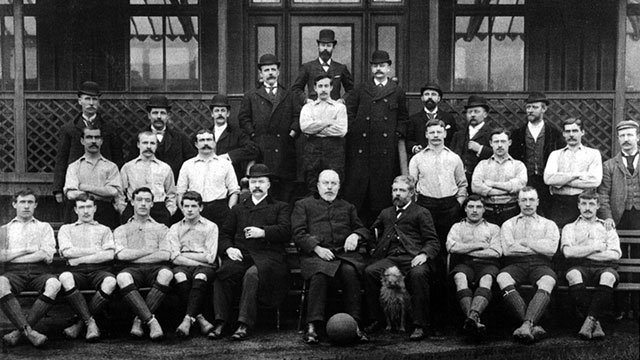 Liverpool’s rivals Everton were formed in 1878 by John Houlding, a local businessman and future mayor of Liverpool.

They began playing at Anfield Road, a field rented from a brewer named John Orrell. As Everton became more established Houlding began to build football stands at Anfield Road. However, after a dispute in 1892 the club split into two groups. One group decided to move over to Goodison Park, while Houlding and a few others remained at Anfield Road, and adopted the name Liverpool Football Club. His friend John McKenna was appointed manager, and he went to Scotland to recruit players. After their first year McKenna decided it was time to apply for entrance into the Football League.

Despite winning promotion to the first division in their first year in the league, they continued in the shadow of neighbours Everton, with many local people refusing to watch a team of Scotsmen. They struggled in their first season, and were relegated to division two. McKenna swore that the club would be back in the top flight within twelve months, and their drive and determination won them the second division title, and promotion to division one. This time they finished a credible fifth, higher than rivals Everton.

They won their first championship in 1900/01, but were again relegated two years later. After another year in the second division they bounced back up and immediately won their second championship in 1904/05. As a reward the directors built the legendary Spion Kop for the fans. Named after a hill in Natal where a Merseyside regiment suffered heavy losses in the Boer War. Three hundred died in a vain attempt to lift the siege of Ladysmith, many of them Liverpool lads. “Spion Kop” means “vantage point” in Afrikaans. In 1928 the stand was extended and roofed, providing cover for 30,000 fans.

Liverpool won two more championship titles after World War I, but hit poor form following World War II, despite being runner up to Arsenal in the FA Cup final of 1950. They came last in division one in 1953/54, and were relegated. After several bad years Bill Shankly came to the rescue. He was appointed manager in 1959, and over the next fourteen years turned Liverpool into the greatest club in English football. In his first twelve months he sold twenty four players. By 1963/64 they won their sixth championship, and the following year added the FA Cup to their list of titles, beating Leeds in the final. They continued their run of success with another league title in 1965/66.

It was another seven years before they won another cup, this time the UEFA Cup in 1972/73, followed by the FA Cup again in 1973/74. Shankly then surprisingly called it a day, handing over the managerial role to his right-hand man Bob Paisley. It wasn’t long before he won silverware, taking the league championship and UEFA cup in his second season, 1975/76. Next year they just missed out on the treble, winning the League and beating Borussia Moenchengladbach in the European Cup, but losing 2-1 to Manchester United in the FA Cup final. They became the first British club to retain the European Cup, beating FC Bruge 1-0 in the final of 1977/78. Two successive League titles followed in 1978/79and 1979/80. 1981 was another great season for the club, winning the first of four consecutive League Cup titles and beating Real Madrid to win the European Cup for a third time. Two more successive League titles followed in 1981/82 and 1982/83, before Paisley resigned. During his nine years in charge he won the Manager of the Year award six times.

Joe Fagan took over as manager and in his first season they won their third consecutive League title, the League Cup and the European Cup, beating AC Roma on Italian soil. The following year disaster struck. During the European Cup final against Juventus at the Heysel stadium, rioting broke out. A wall collapsed killing 38 Juventus fans. The game was won by Juventus, but more importantly English clubs were given an indefinite ban from European football.

Kenny Dalglish became player-manager in 1986, winning the League and FA Cup in his first season in charge. They won the League again in 1987/88, but just missed out on a second double when beaten by Wimbledon in the FA Cup final. 1988/89 was the worst season in the history of Liverpool Football Club. During the FA Cup semi-final against Nottingham Forest at Hillsborough 96 Liverpool fans were killed as the Lepping Lane stand became overcrowded. They went on to win the semi-final, and met Everton in an emotional final at Wembley. Both sets of fans were as one, singing ‘You’ll Never Walk Alone’ and observing a one minute silence before the start of the game. Liverpool won the game 3-2, with substitute Ian Rush scoring two late goals. They should have won the League title in the same year, with challengers Arsenal needing to win by two clear goals at Anfield. With Arsenal winning 1-0, Michael Thomas scored in injury time to steal the title, and ruin Liverpool’s chances of another double. Dalglish resigned in 1991, blaming stress for his shock exit.

Ronnie Moran became caretaker manager, before Graeme Souness took over in April 1991. He bough a host of new players, but his strict managerial style was unpopular and failed to recreate the success of previous years. Much of the problems surrounding the club today stem from the Souness era.

Roy Evans took over and immediately won the League Cup in his first full season in charge in 1995. Despite building an exciting team of young players, many from the youth team he failed to win major trophies. Fans and directors demanded success and in 1998 brought in Frenchman Gerard Houllier in a joint managerial role with Evans. The shared job proved unsuccessful, and Evans backed down after only three months of the new season, ending a 35 year association with the club.

Houllier went on to develop the squad by bringing in relatively unknown players and was not undeterred by criticism from the media as the Liverpool style became more defensive. He was rewarded with five trophies in 2001 as Liverpool remained unbeaten in all cup competitions that season and qualified for the Champions League.

The following season saw Liverpool make a serious challenge for the Premiership, while also putting in a good debut performance in the Champinos League, reaching the quarter-finals only to be beaten by Bayer Leverkusen, who went on to the final.

Illness to Gerard Houllier left Phil Thompson in charge for much of the season, but his Boot Room background gave him the ability to keep the club ticking over in the Frenchamn’s absence. Liverpool went on to finish runners-up to Arsenal in the Premiership and once again qualified for the Champions League, although this turned out to be the high point of Houllier’s period in charge.

After narrowly qualifying for the Champions League by finishing fourth, way behind Arsenal, Chelsea and Manchester United, in the 2003/04 season the board decided it was time for a change. Rafael Benitez was the man earmarked for job and Houllier agreed to move on.

Benitez had turned Valencia into a force in Spanish football and, more importantly, did it on a shoestring. He won a league and UEFA Cup double in 2003/04 and in his first season in charge at Valencia he led the club to their first La Liga title for 31 years.

He didn’t waste much time bringing in his own backroom staff and relieving Phil Thompson, Sammy Lee and Joe Corrigan of their duties. Suddenly Liverpool started playing attacking, pass-and-move football again, pleasing both the supporters and the critics and showing promise for the future, and it wasn’t long before they were winning silverware – the European Cup after the most exciting final in the history of the Champions League.

Investment by American businessmen George Gillett and Tom Hicks put pressure on Benitez to succeed in the Premiership, but rifts occurred when the manager was refused money to strengthen his squad.

Benitez parted company with Liverpool in the summer of 2010 and was replaced by Roy Hodgson, who struggled to win the hearts of the fans at a time when the club were trying to sever their ties with their American owners.

Eventually, thanks to the efforts of chairman Martin Broughton, a new buyer was found for the club and despite efforts in the courts to prevent it, Hicks and Gillett were ousted in October 2010 and the club welcomed a new owner John Henry, whose NESV company had already achieved success turning around the Boston Red Sox in America.

Hodgson’s future was short-lived and after a terrible start to the 2010/11 season he finally agreed to stand down in January 2011 to be replaced, albeit temporarily, by Kenny Dalglish. Liverpool fans had something to sing about at last.

Dalglish soon instilled belief and confidence in the squad, got rid of the deadwood, including the controversial departure of Fernando Torres to Chelsea, and brought in Luis Suarez and Andy Carroll to lead the new attack. The club was reborn and started winning games again. The King was back.

Sadly, despite winning the League Cup the following season, and losing out to Chelsea in the final of the FA Cup, Liverpool could only finish eighth in the Premier League and Dalglish was promptly sacked at the end of the seaon, being replaced by Swansea boss Brendan Rodgers two weeks later.

The new boss’ tiki-taka style was difficult for the Reds to get used to, but there were glimmers of hope, with a Premier League second-place finish in 2013/14. However, Rodgers failed to improve on that and parted company with the club, and was replaced with highly-rated former Borussia Dortmund manager Jurgen Klopp.

Klopp settled in well and was popular with players, fans and press alike. His no-nonsense style and likeable demeanour earned him a lot of respect and his tactics paid dividends.

After narrowly missing out to Real Madrid a year earlier, Klopp led Liverpool to their sixth European Cup in 2019, beating Tottenham in the Champions League final in Madrid. This was followed up with a dominant Premier League season which they won comfortably after a long 30-year wait.