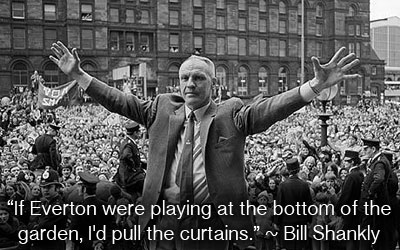 Many of Bill Shankly‘s quotes are famous the world over. Here’s just a selection of them…

“Some people believe football is a matter of life and death, I am very disappointed with that attitude. I can assure you it is much, much more important than that.”

“If Everton were playing at the bottom of the garden, I’d pull the curtains.”

“The trouble with referees is that they know the rules, but they don’t know the game.”

“A lot of football success is in the mind. You must believe that you are the best and then make sure that you are, in my time at Liverpool we always said we had the best two teams in Merseyside, Liverpool and Liverpool reserves.”

“Of course I didn’t take my wife to see Rochdale as an anniversary present, it was her birthday. Would I have got married in the football season? Anyway, it was Rochdale reserves.”

“If a player is not interfering with play or seeking to gain advantage, then he should be.”

(on the day he signed Ian St John)
“Son, you’ll do well here as long as you remember two things. Don’t over-eat and don’t lose your accent.”

(after a 0-0 draw at Anfield)
“What can you do, playing against eleven goalposts?”

(to Kevin Keegan)
“Just go out and drop a few hand grenades all over the place son.”

(at Dixie Dean’s funeral)
“I know this is a sad occasion but I think that Dixie would be amazed to know that even in death he could draw a bigger crowd than Everton can on a Saturday afternoon.”

(to a journalist suggesting Liverpool were in difficulties)
“Ay, here we are with problems at the top of the league.”

(to a translator when being surrounded by gesticulating Italian journalists)
“Just tell them I completely disagree with everything they say!”

(to Alan Ball who just signed for Everton)
“Don’t worry Alan. At least you’ll be able to play close to a great team!”

(after beating Everton in the 1971 FA cup semi-final)
“Sickness would not have kept me away from this one. If I’d been dead, I would have had them bring the casket to the ground, prop it up in the stands and cut a hole in the lid.”

(to a reporter in the 60’s)
“Yes Roger Hunt misses a few, but he gets in the right place to miss them.”

(after signing Ron Yeats)
“With him in defence, we could play Arthur Askey in goal.”